There is nothing more appetizing than the fresh mountain breeze spiced with the smell of cardamom and cinnamon. Just driving through the winding roads past tea plantations and spice gardens of Munnar and Thekkady is a foodies delight.I bring to you the flavours of kerala, the authentic and the quirky, the adventurous to the everyday foodie delights.
We drove around in search for the appam and chicken curry, because every foodie traveller worth his black peppers knows that no journey to Kerala is ever complete without a taste of appam.
In our quest for appams though we encountered the very enterprising road side maggi vendor who made a mean sambar verion of maggi complete with curry leaves, carrots and beans.It was a wonder there weren't drumsticks in it.Maggi truly is our national dish.
Our journey had just begun, as we were to experience more of this culinary ride. Next stop was quail eggs. None of us had actually tasted quail eggs before and the lure of the unknown was too much to bear so we gave into the temptation. the eggs looked exotic.Tiny eggs resembling marbles in size, they even had splattered patterns on them like marbles. We asked the road side stall owner to whip up some eggs for us and what we got were four tiny sunny side ups on a paper plate! They didn't taste as exotic as they had in their shells, but as they say dont judge an egg by it's shell.Quail eggs by the way are a delicacy in some countries according to wikipedia, and it ranks on another food blog's top 7 street foods around the world. 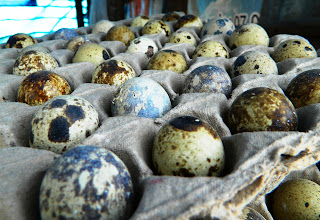 All the appetizers (maggi and eggs) by then had got us even more hungry and we went in search for a lunch place. Lunch found us. As we drove around Munnar, a tiny lunch home literally stopped us in our tracks with it's mouth watering smell of sea food. We were slaves to our olfactory system once more as we ordered plates of prawns and fish to go with our rice and sambar. Rice, we were informed were either the white rice or the par boiled rice. Never to shy away from an adventure we opted for the exotic once more.Par boiling consists of soaking, briefly pressure steaming and drying rice prior to milling. Parboiling drives beneficial nutrients from the bran into the grain.It is close to brown rice in nutritional value, but  par boiled rice is easier to digest.

As night fall arrived, we got restless on once more. The prawns in curry leaves,brown onions and fried pieces coconut had been delicious but we craved for appams. The soft bowl shaped pancackes of fermented rice, which soak up the curry like a sponge, add a whole new dimension to having chicken curry or checken stew. The appam though it seemed was too lowly a dish for the restaurants to serve and we turned yet again to the ever enterprising road side vendors. We found one near the bus stand amongst hired taxis travelling the length and breadth of Kerala. There amongst all the blaring car horns and diesel smell we found our long craved manna. we bought 25 of them, because you can never have enough of money, happiness and appams. 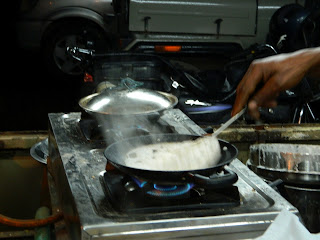 Kerala with its verdant greenery, cocnut groves and backwaters has a wealth of culinary delights. from the soft appams, to the spicy prawns, the out of the ordinary qual eggs, to the very authentic par boiled eggs, we had experienced the very best that Munnar and Thekkady the spice capitals of Kerala. Each place has its flavour, be it the red chillies of the north, the kokkam of the west, the Paach phoron of the east. Kerala was all about farm fressh spices. streets sold basket full of cinnamons, cardamoms, star anise, bay leaves, nut meg, black pepper and cloves. Spices which held the promise of lifting any dish from the ordinary to the sublime.Spices which promised to cast a spell. Go on a magical foodie trail through Kerala, and leave mesmerised. 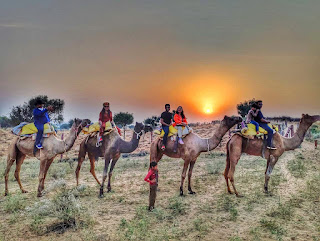