I hadn’t planned for this food trail. A school camp to vedasandur hardly had the makings of a foodies paradise and yet we had some ‘fresh from the farm local flavor’ to the place which prompted me to write this post.

Who knows some day someone might find themselves on the road between Madurai and Dindigul and my blog post makes them stop over at the road side ‘sapad’ joint in Vedasanthur. 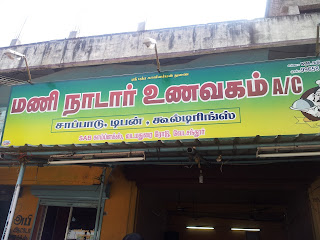 The sign boards are all in Tamil, so did not get the name of the food place, but its close to the government secondary higher secondary girls school and shri mala primary school. Since the school was where we had the eye camp, we headed for the sapad joint , just as the ringing of the school bell announced the lunch break for the children and time for us to close shop for lunch.

Most of these camps will have the local coordinator taking us to the nearest place to a hot or not so hot meal. Sometimes some non government organization like lions club might pitch in. Since I had been a=on a few camps in the nearby villages I had come to accept the banana leaf meal of sapad which means rice in Tamil. Even though ‘sapad’ means rice, it also means food. So if someone wants to ask ‘have you eaten?’ , they say “sapadingla?” in reply if we have eaten we say “saptache.”
The guy in the sapad joint announced that they had the vegetarian sapad meal, as well as chicken or mutton biryani.Now I have had sapad at many a roadside stall, and so the newness of having biryani on a banana leaf could not be passed up.


As I clicked away at the food, we saw the beaming lungi clad server ply us with more food.
The veg sapad had rice (the staple) , sambar, a cabbage sabji, a potato sabji, curd, pickle, papad, extra pinch of salt on the side and since we were privileged customers ;) a cup of sweet dish, kheer.

The chicken biryani was made of very small, very soft  grains of rice unlike the long basmati grains that one is used to. A side dish of dry chicken and curried chicken soup ‘kolam’ was served along with the biryani. Onions lightly marinated in curd completed the dish. It was sumptuous and we licked the banana leaf clean.

Its customery to fold your banana leaf from up to down if you have enjoyed your meal, and as a regard for the cook I was told and I promptly folded my disposable sapad plate before throwing it away. A few more tips on eating on a banana leaf are that if you ever find yourself with a leaf which has a broad end and a narrow end , always keep the wide end to your right so that more food is put on the right side allowing you to use your right hand without crossing the plate.Always wash your banana leaf thoroughly because it is after all a leaf, and I for one had bird poop on my plate once.
As we drove back 85 kilometers to Madurai, we stopped at a roadside vineyard to pick up farm fresh grapes for our journey back. The grapes were ‘rose grapes’ the lady selling them informed. They were seeded as well as sweet. I am more prone to eat the genetically modified seedless grapes as I suppose most of us city bred types are, but as my professor says “seedless grapes make you seedless” , I enjoyed the “organic food ness “ of the rose grapes.

I returned back amazed at what a full day I had had. Tasty, wholesome, spiceful food is waiting to be sampled in all parts of the world as long as you let the trail lead you.
at December 12, 2012