India, considering all its diversity and muti regionalism, still has a thread of commonalitry running through all the states. Almost all the states have their new year around the second week of april. They call it Vishu in Kerala, Baisakhi in Punjab,puthandu in Tamil and  Poila boisakh in West Bengal.

Being a bengali living in South India, allowed me to experince the unique experience of celebrating Vishu.Kerala and malayali food is special to me, since my my food blog post was on kerala, the beauty of Munnar inspired me to dedicate a whole blog to food trails. here is munnar food blog http://foodietrails.blogspot.in/2012/06/there-is-nothing-more-appetizing-than.html


Vishu in Sanskrit mean equal and represents the vernal equinox as well as the Kerala new year. As with all things New, the year is brought in with the auspicious Vishukanni.The vishukanni, is an arrangement of items of prosperity, like fruits, foods,rice and gold. It is believed that it should be the first thing one sees on the day of Vishu.
The food served on banana leaf was a feast for the eyes.vibrant orange of the Olan (pumpkin cooked in coconut milk), the creamy yellow curry of the mambazhapuliseri (ripe magoes in a sweet and sour curry, made in thick coconut milk), the various pickles and condiments adding to the riot of colours.

to know more about eating on a banana leaf my food trail on south indian sapad: http://foodietrails.blogspot.in/2012/12/food-trailschool-camps-and-south-indian.html

Most of the dishes were very mildly flavoured.the spices were blended such that they left the palate guessing. We boldly ventured into dishes we could hardly pronounce and had never tasted before.We hazarded guesses as to the contents of some of them, and one thing we were sure of, most dishes had coconut. Grated coconut, to coconut milk to dishes cooked in coconut oil, and yet no two food Items tasted the same.

The total find of the lunch was the Inji-puli. Made of the uncommon coming together of tamarind, jaggery and ginger, it was meant to be a palate cleanser. a tart pickle/sauce which was supposed to play a supporting role to the main course of rice and sambar, turned out to be the most passed around dish of the day. lip smackingly good.

The mambazhapulisseri (mango gravy), was the most anticipated dish of the day. If there is one dish we non malayalis know then it is Avial, a thick coconut gravy with an assortment of vegetables, I always thought of Avial as the mild fairer version of Sambar. Mango gravy, then is the sweet and sour vibrant version of Sambar. except that it is nothing like Sambar. For starters it has large chunks of ripe mangoes floating in it. also I spied a few fried red chillies in it too. How does mango, coconut and red chillies come together, they come together to make a delicious tongue twister of a gravy.

Even amongst such complex dishes, I found my hands reaching for the humble Kootukari. It was a nice hearty dish of bengal grams and what tasted like potatoes but wasn't potatoes. I later came to know it was Yam, and I had to google it since yam is not a very commonly eaten in North India.

The kerala stew, is as famous as the avial, and it was a treat to be able to sample the authentic home style kerala version, rather than the restaurant versions that one gets to have. 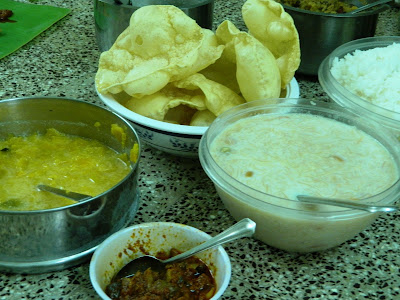 The meal which consisted of such unusual food items, ended on the traditional note of payassam.
A lovely sunday afternoon, well spent. 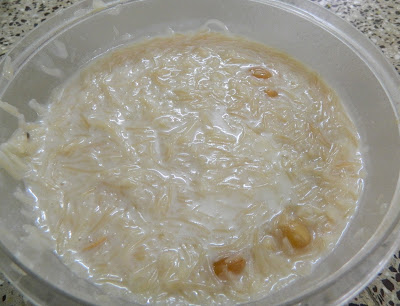 Food trails are as much about the people as it is about the food. A single working mother, cooked a meal for over a dozen guests. While her husband is working in the middle east, she brings up her two daughters, wroks as a Doctor, and still has the energy to keep traditions alive. In the fast changing world, traditions and cultures are on the decline, and we must all strive to keep it alive. She kept the Vishukanni ready the night before,cut and sliced all morning through, so that her daughter and friends could experience a bit of Kerala in Tamil Nadu. In the same spirit I write this food blog, even as hundreds of chores fight for my attention.
This new year I wish you peace and prosperity, and as you reach for the stars, may your roots remain in your homeland soil.