Festivals and their festivities are the greatest testament to the celebration of life-and food. I am a big fan of festivities, and having written about the ever popular Durga Puja, and the refreshing Vishu festivities, I bring to you the unique celebrations of chithirai thiruvizha festivities. 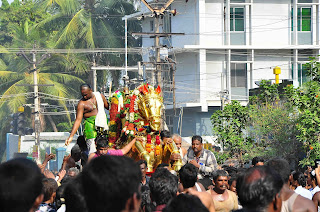 Now most festivals belong to a particular country or religion, or a state, but here is a festival which is celebrated in a single city! Every year, the Gods descent in the temple city of Madurai. Madurai is no stranger to Gods, it is home to the Meenakshi temple which pretty much lords over the cityscape, the four temple towers literally towering over Madurai, and yet the frenzy reaches unimaginable levels during the month of Chitirai, and the … in particular the day Alagar arrives.
The folklore surrounding the festival are many and myriad but the most popular belief is that Goddess Meenakshi of the afore mentioned temple marries Lord Shiva, and her Brother Lord Alagar, of the Alagar Coil fame is invited to the celebrations as well. But for various reasons Lord Alagar arrives at his own sisters wedding at Madurai, only to realize that the wedding has already taken place! Miffed and angry he refuses to meet with his sister and decides to take to the streets of the city to meet and greet with his devoties. For the Unabridged version you can read all about it on Wikipedia here. 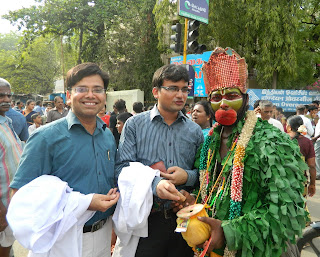 Ask any Maduraite and they will tell you it is the day God comes down to our earthly abode to meet with his devoties, and that’s absolutely true, but ask me, and it’s the day the fair comes to town, to the streets.
Thousands of devotees take to the streets and so do ice cream vendors with their carts, and the candy floss stands jostle with the balloon sellers. It’s a coming together of carnival food and street food. Colourful, attractive, with dubious standards of hygiene, but 100% fun. 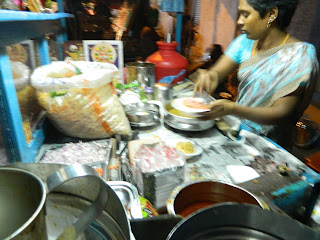 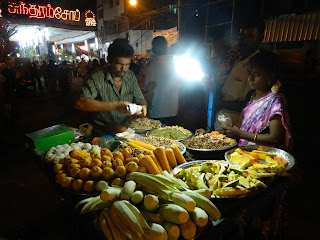 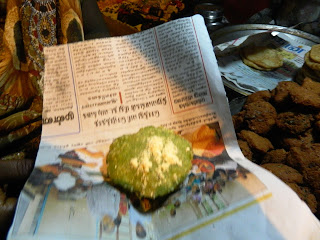 The mulu murugan were green coloured bite sized puris, sprinkled with a spice powder. We were informed that it was made of herbs, and had medicinal properties. The Boli was another deep fried street food, which was stuffed sweet puris. Both the Boli and the Mulu Murugan were street food I had seen being sold in Madurai before and yet had not tried them out of doubts about the type of oil used to  make them, the hygiene conditions etc. But the carnival-ish atmosphere of the festivities mocked my reservations as I reached for the Puris served on a plate consisting of a scrap of tamil newspaper. The air was filled with the strains of flute played by the flute sellers, the lilting tune floated in the air along with the water bubbles. Some things are synonymous with festivals in India, whether in Calcutta or Madurai, like balloon sellers, and bubble makers. 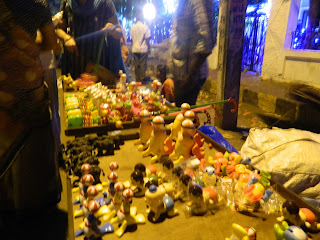 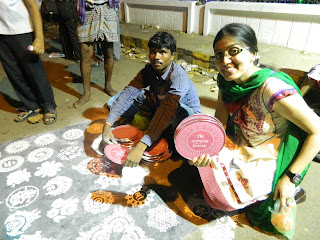 But somethings are unique to a place like the stems we had. They were thin slices of a white stem, whose name I could not understand no matter how many times I asked. Some said they are banana stems, some said they were coconut stems. I was reminded of my days of basic botany in school, the cross section clearly showed the xylem and phloem layers of the cut stems. They were so interesting that the taste was secondary. They had a strange appeal and I kept looking out for more of this healthy snack. 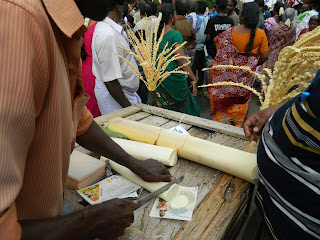 Chitirai is celebrated in April, and even though it is sweltering hot, it’s still worth making the trip to Madurai for this immense gathering. For days on end we heard and saw people milling around on the streets, with the knowledge that the Lord had arrived in his Golden horse and all was fine with the world. 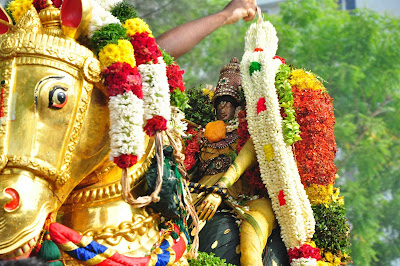