It’s Saturday, and the world is headed to Arpora, for the Saturday night market. And when I say world, I do literally mean the world, as in Indians, and Russians, Mexicans, Italians, Americans, Britishers, Taiwanese, and from a so many wonderful and exotic places, that your head starts reeling. Saturday night market in Arpora, Goa is quite certainly the melting pot of food, fashion, accessories and people.

This place can be a bit hard to find, and after a long winding path through unlit streets, supposedly leading to nowhere, I was quite frankly astonished at the LARGE number of people who actually find their way here. The market is huge, acres and acres of land which also has parking for vehicles, and yet, it’s crowded. There is literally a traffic jam trying to get to this place, even though they have enormous parking area, you still see cars lining the streets. Be prepared to walk some distance. The place opens at around 6 pm, and if rumours are to be believed ,goes on till 6 am. I would advice to get here early, around 8 pm, or the most 9 pm, because not only do you get parking space, but also to taste the amazing array of world cuisine, which starts finishing as the night goes on.

The first impression of this place is kitch, almost like a great Indian circus. The colours and scenes are over whelming to the senses. But walk around the stalls, and see colourful Indian artifacts, juxtaposed with Russian winter jackets, and ghetto chic leather studded jackets, and the place slowly grows on you. This place has so many sights, which you have never seen before that it is kind of hard to imagine that you are in India, or in any other part of the world. This place does not resemble any place, it stands out as a singularly unique experience.


It’s hard to describe it, but I shall try in a few pictures and paragraphs, the essence of Saturday night market in Goa.

Lets start with the food.

We had Shawarma, a lebanese street food, which was a generously portioned pita bread, stuffed with chicken and overflowing with Tahini sauce. 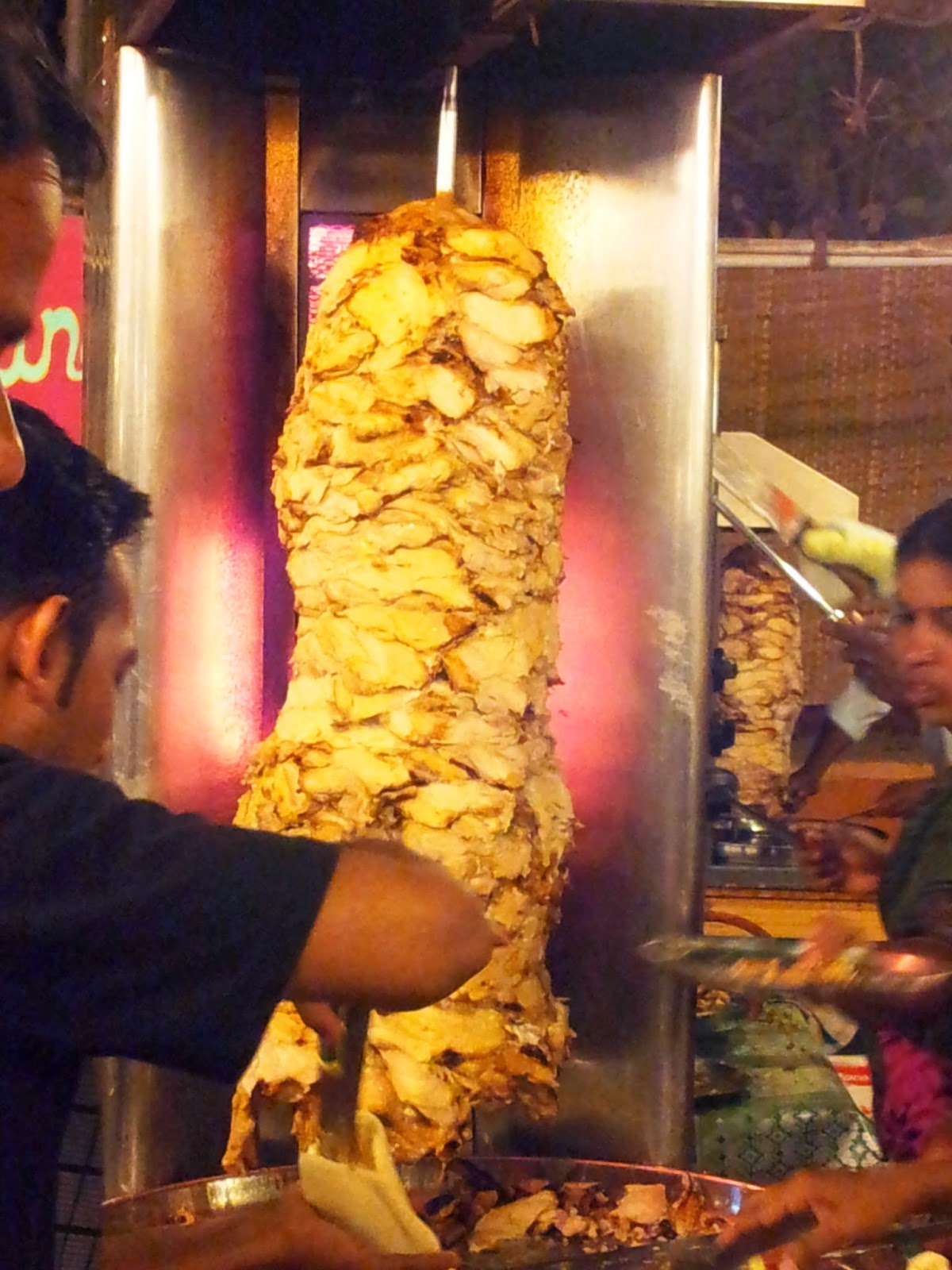 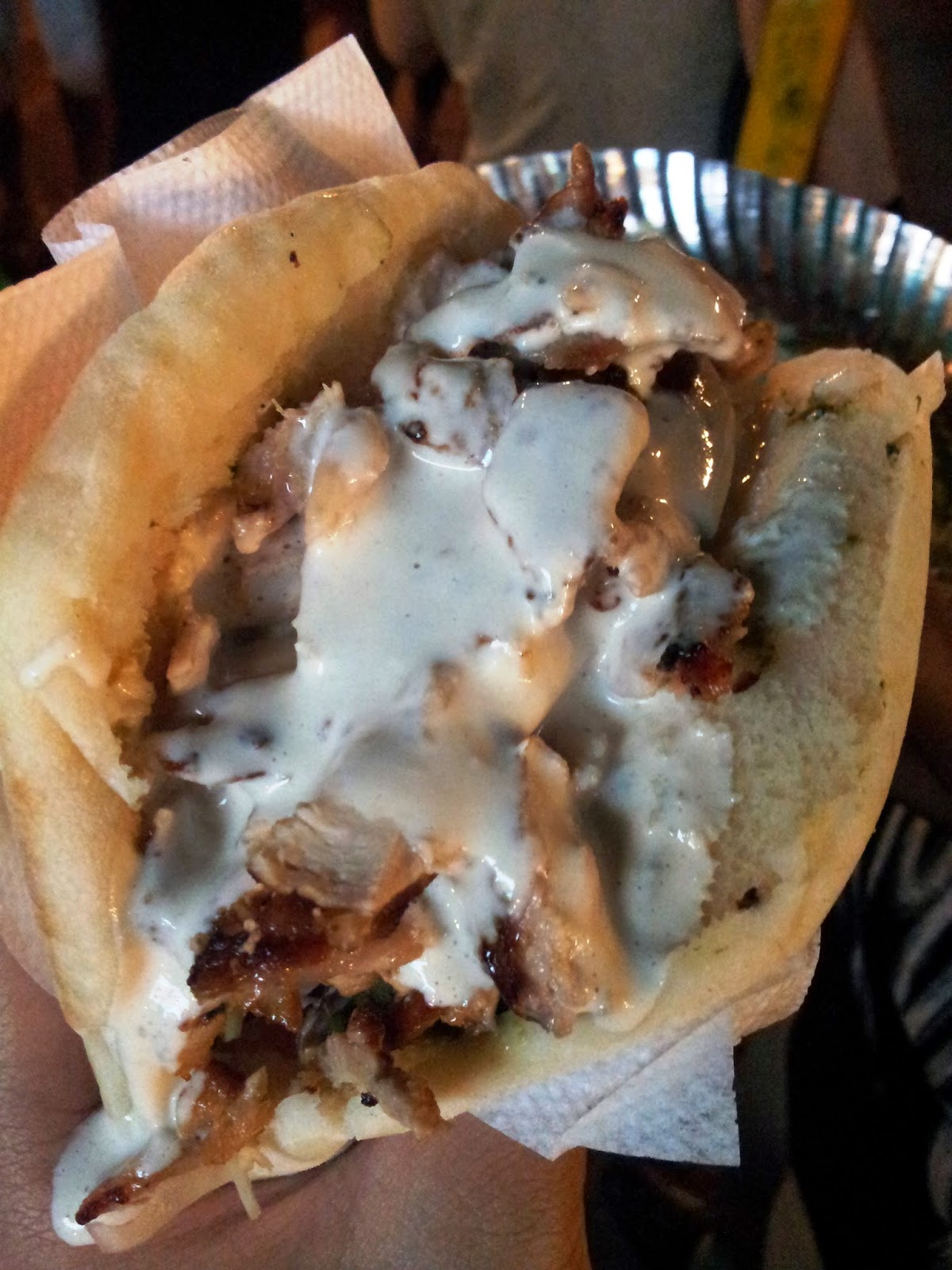 We tried the burger from the famed Thalassa in Vagator. Thalassa has it’s restaurant in Vagator, and chances are that on a busy night you won’t get a reservation there, but if you still crave greek food, you can always head to the Saturday night bazaar. 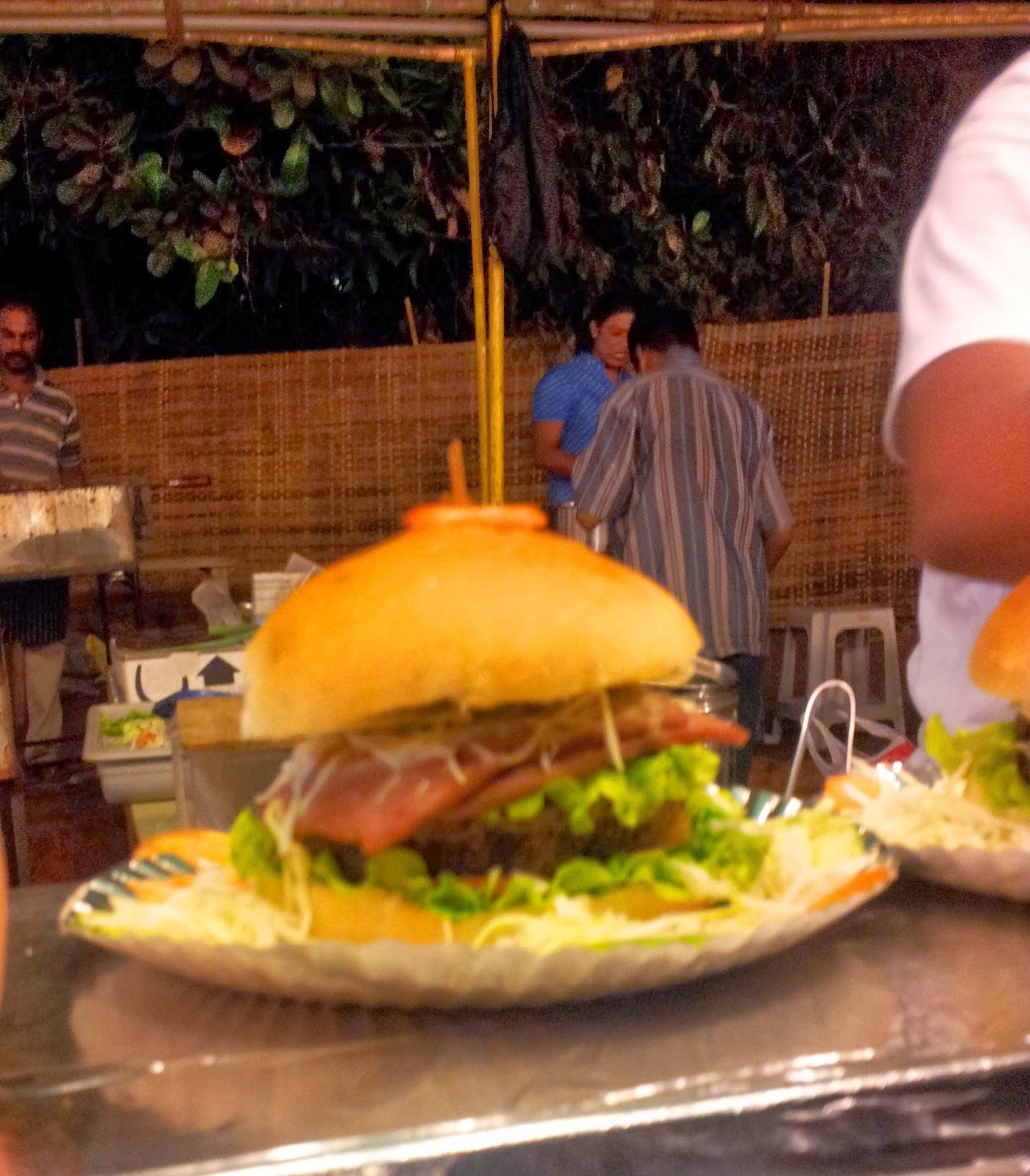 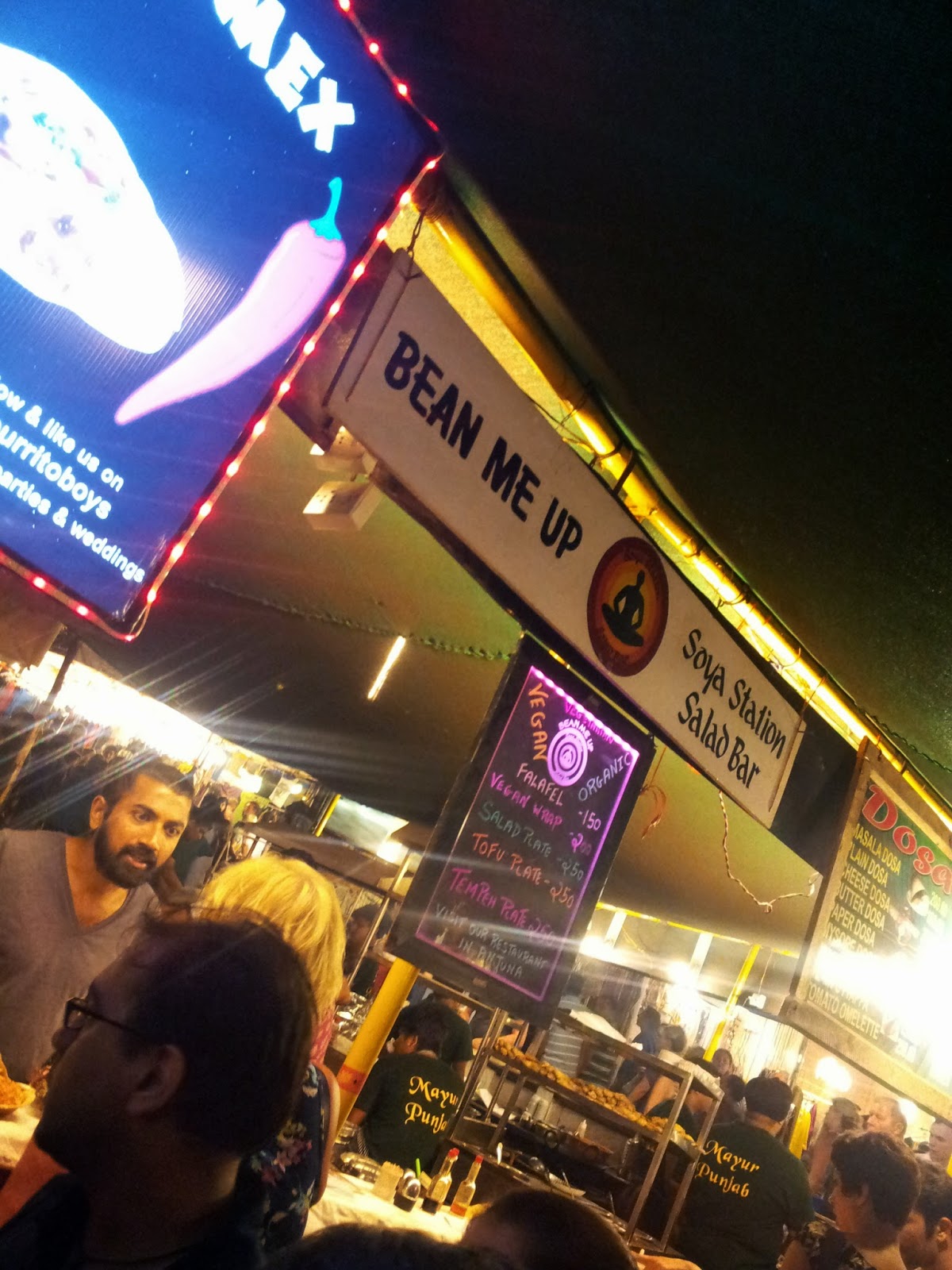 Infact a lot of famous eateries have their stalls here. There is bean me up, a very popular vegan eatery, and it’s surprising how much people were enjoying their veggie delights.

What I truly want to try next time, is the giant burritos from the tex mex place. But just looking at the guy behind the counter make one, was enough to make me feel full.

We did try the sushi though. Just because it felt so exotic to be having sushi made on a paper plate in the middle of a busy market place. It came with soy sauce, pickled ginger, and some veryvery strong wasabi.
There was a place selling authentic thai cuisine, quite a few places for Indian kebas, and north Indian cuisine as well as Goan food. A cute lady selling her home made food which seemed hugely popular. When I asked her if I could take a picture of her she opened her hair and fluffed it up and striked a pose with a winning smile. 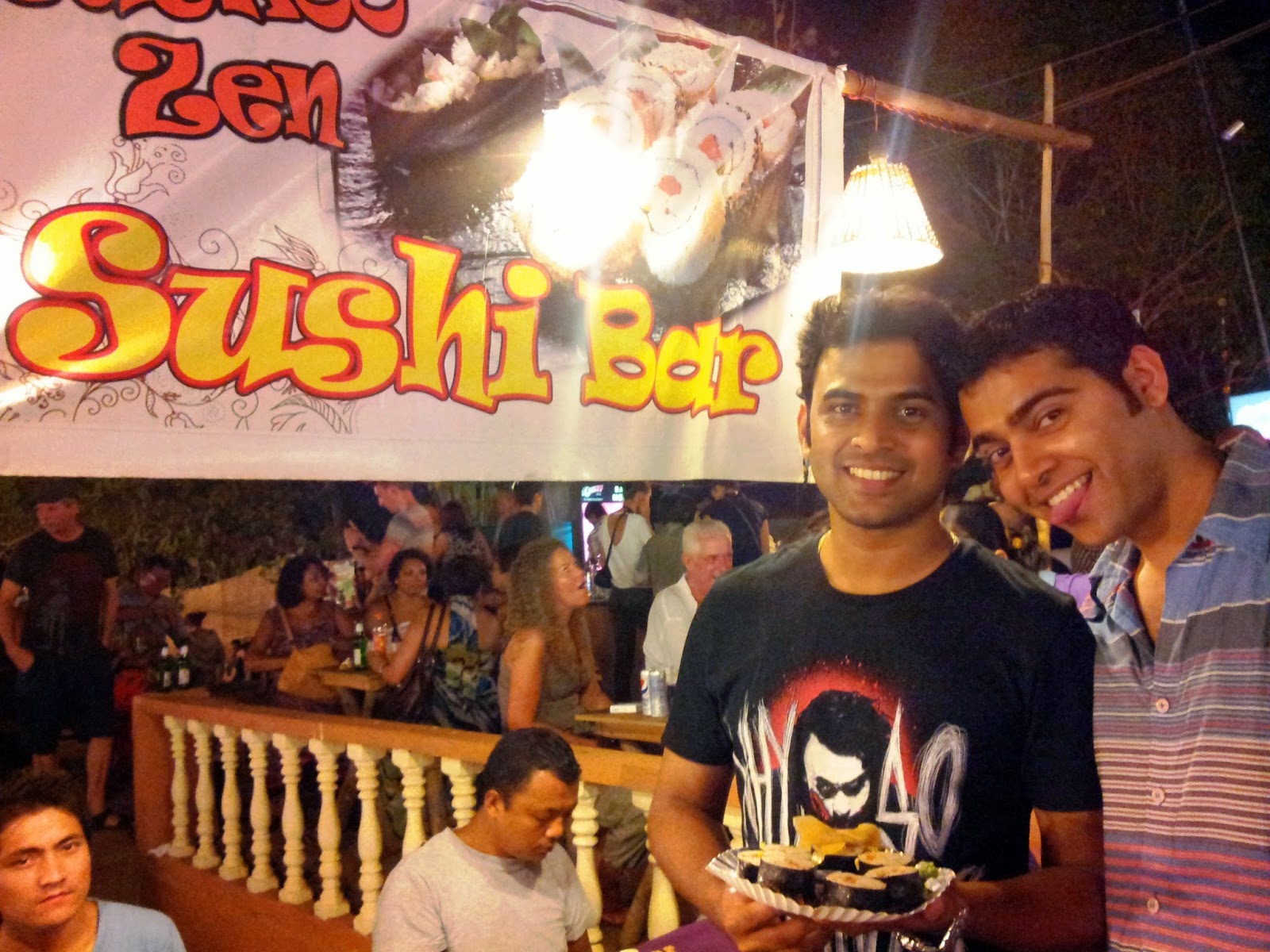 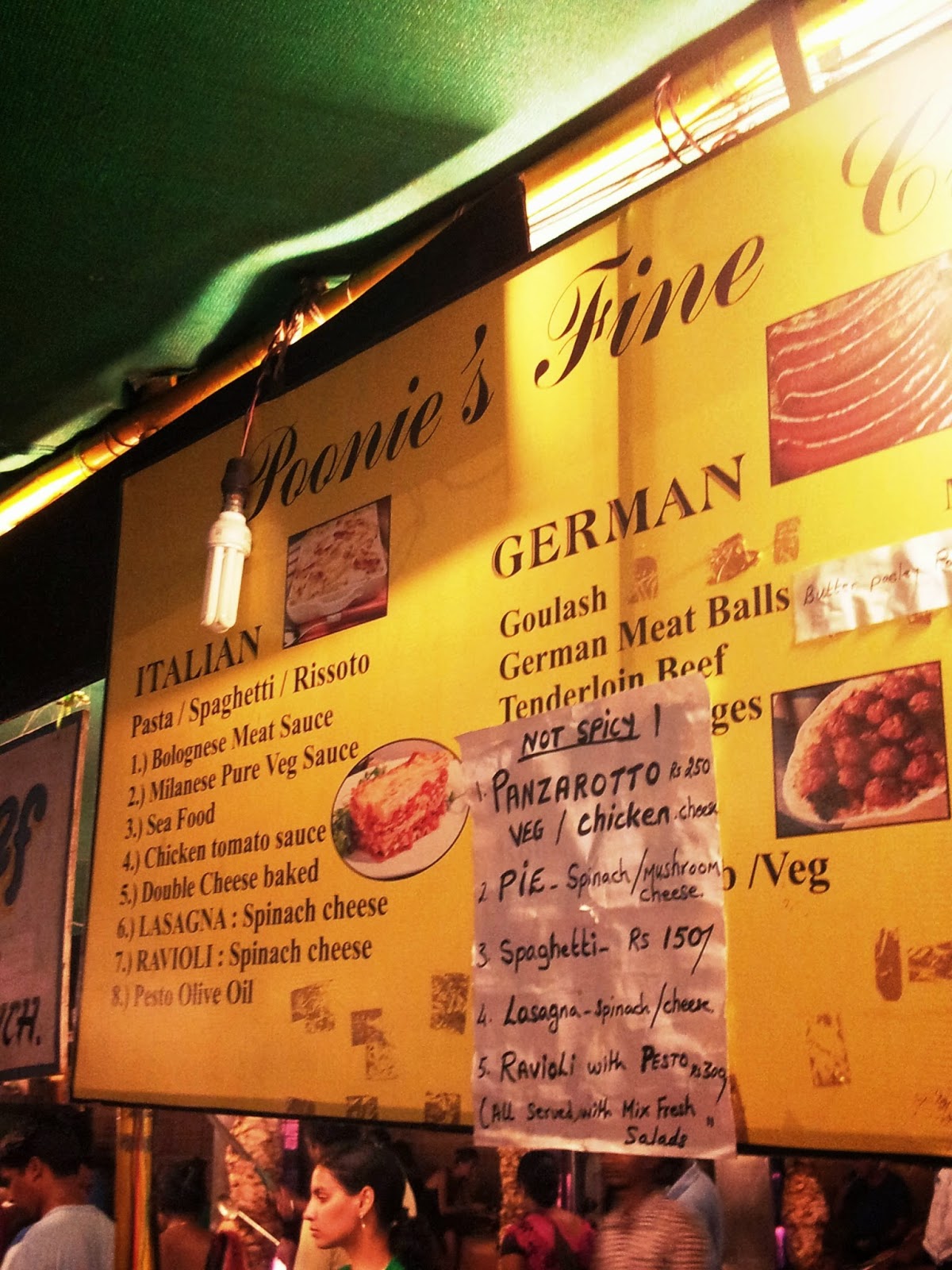 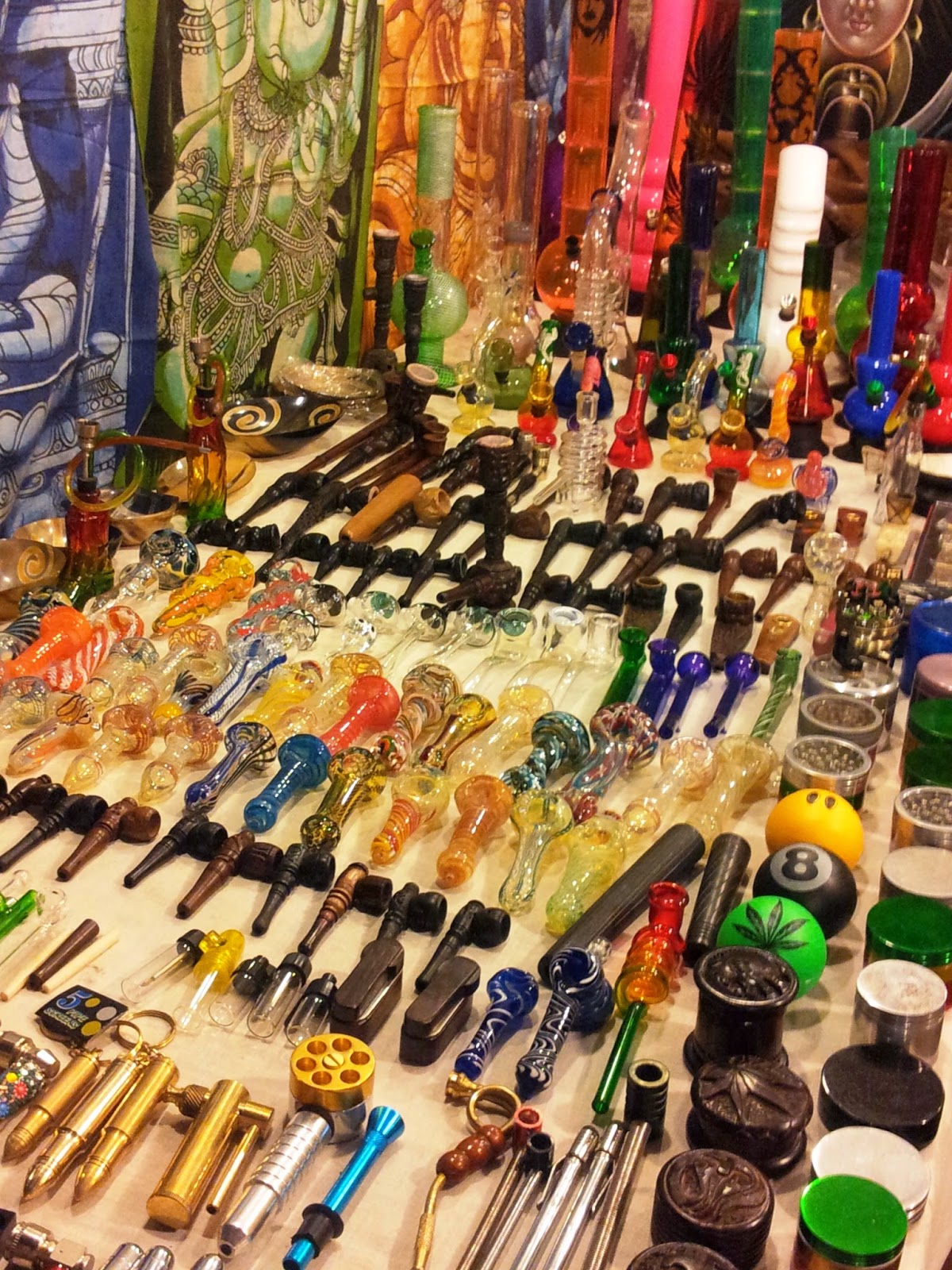 But, not all were as obliging. A large number of stalls, did not want their wares photographed, I guess some of the wares were pretty unique and they didn't want anyone copying their designs. jewellery that glows in the dark, authentic looking native american head gear, you can find it all here.

Even with the huge popularity of the Saturday night market, a lot of my Goan friends haven't been here. Many believe it's a place for druggies and hippies, 'unsafe for women', too much alcohol,selling over priced junk. Well there were boards all over saying this is a drug free zone, and even if it wasn't the over all feel was of a happy holiday mood, rather than hashed out junkies swaying to trance, yes a lot of the clothes seemed worse for wear but no one forces you to buy anything infact as the entry ids free, you could just go to have a good time and enjoy the food while not buying anything at all. about 50 percent of the crowd was Indian, coming from Bombay and Bangalore I guess since it was a long weekend holiday, they know that there isn't any place quite like it, maybe anywhere else in India.

Words and images do not do justice to a place uniquely bohemian as this, so if you happen to be in Goa on a saturday during the non monsoon months between end September and early April, drop in to a market bazaar for a gypsy world enchantment.

HERE ARE SOME OF MY MORE RECENT FABULOUS POSTS ON GOA !

10 reasons why you need a Yacht trip in Goa