On the way to Istanbul, I saw a documentary on the history of Istanbul o the inflight entertainment selection. It was called , the tale of three cities, Constantinople, Byzantium and Istanbul, and how a single city had so many conquerors and so many people coveting it’s strategic placement linking Europe and Asia. A melting pot of cultures and races, almost like India itself, and I wondered how the food would be, again I thought it would be like India, but it wasn’t.

The minute I entered the markets, I was blown away by the perfection of the fruits and vegetables. Peaches the size of a large Mango, and tomatoes which I needed to hold with two hands! Vibrant coloured and almost bursting with freshness, they looked like food on steroids. I am not sure if they were organic or specially genetically modified or is the soil in these parts of the world just more fertile, but our first meal in Istanbul proved that the produce not just looked good, but tasted great as well. So you know how they keep showing on travel and living TV shows how easy it is to rustle up a great rustic salad in minutes? Just toss tomatoes and parsley leaves with some salt and pepper, drizzle olive oil and a squeeze of lemon and Presto you have a summer salad. Yeah right I used to say. Our first meal was that very same salad and without hiding behind heavy salad dressings and being weighed down by any fancy ingredients the peppery parsley , the juicy tomatoes, and the tart lemon derived their place in a travel and living show on Istanbul. Right then I realised that anything I taste here will be difficult to replicate back in India, if I don’t smuggle some of the tomatoes back with me. 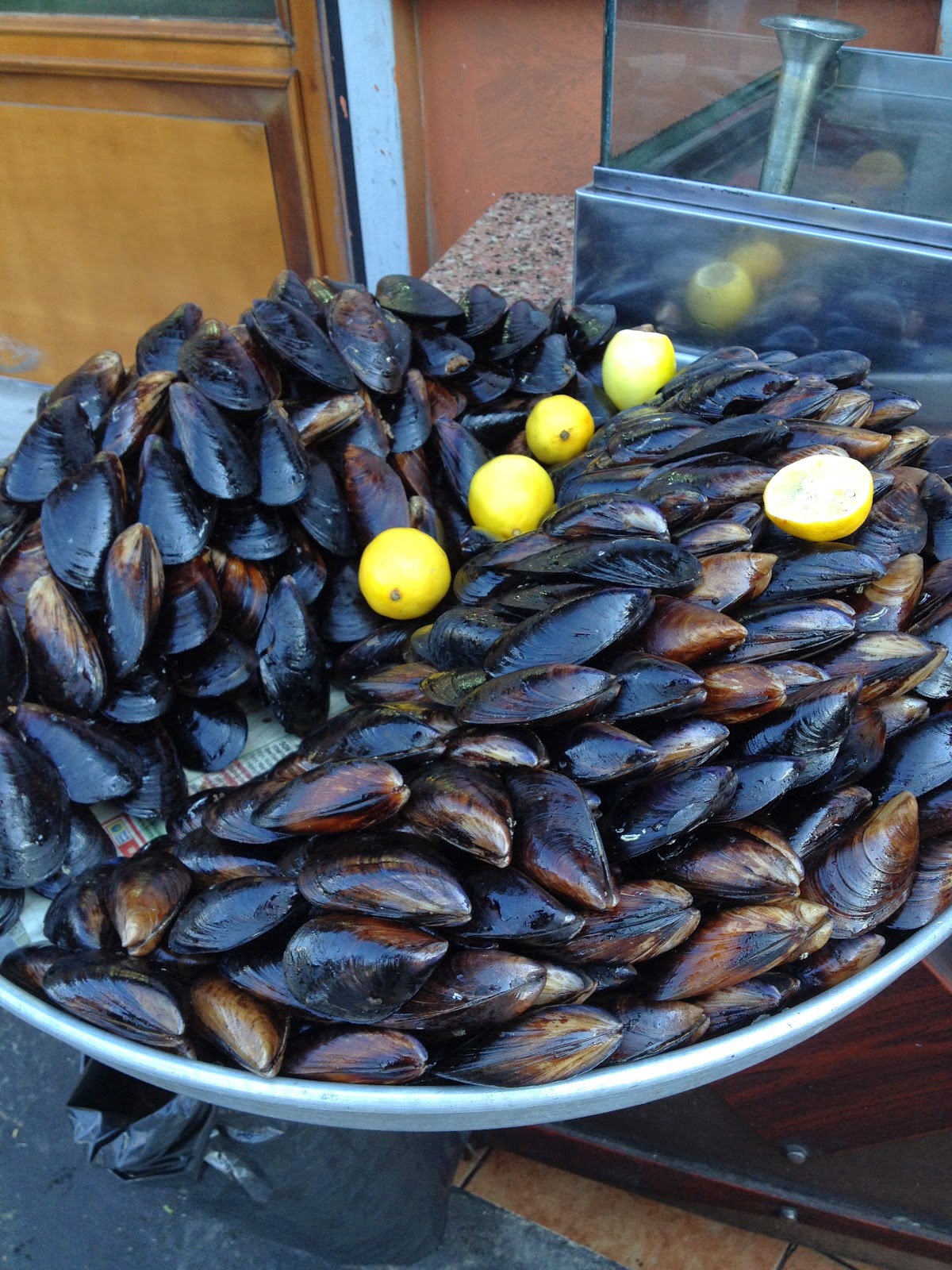 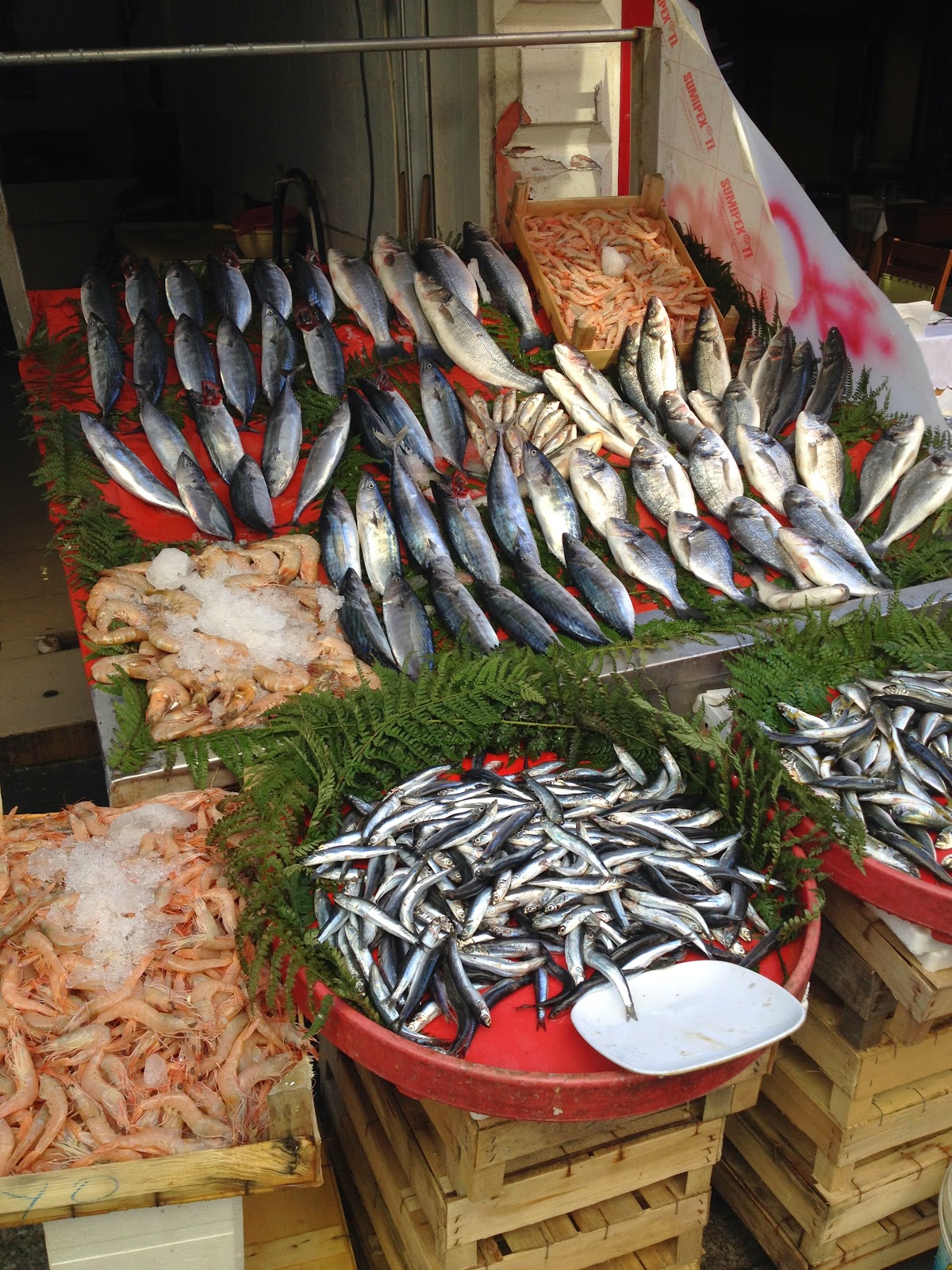 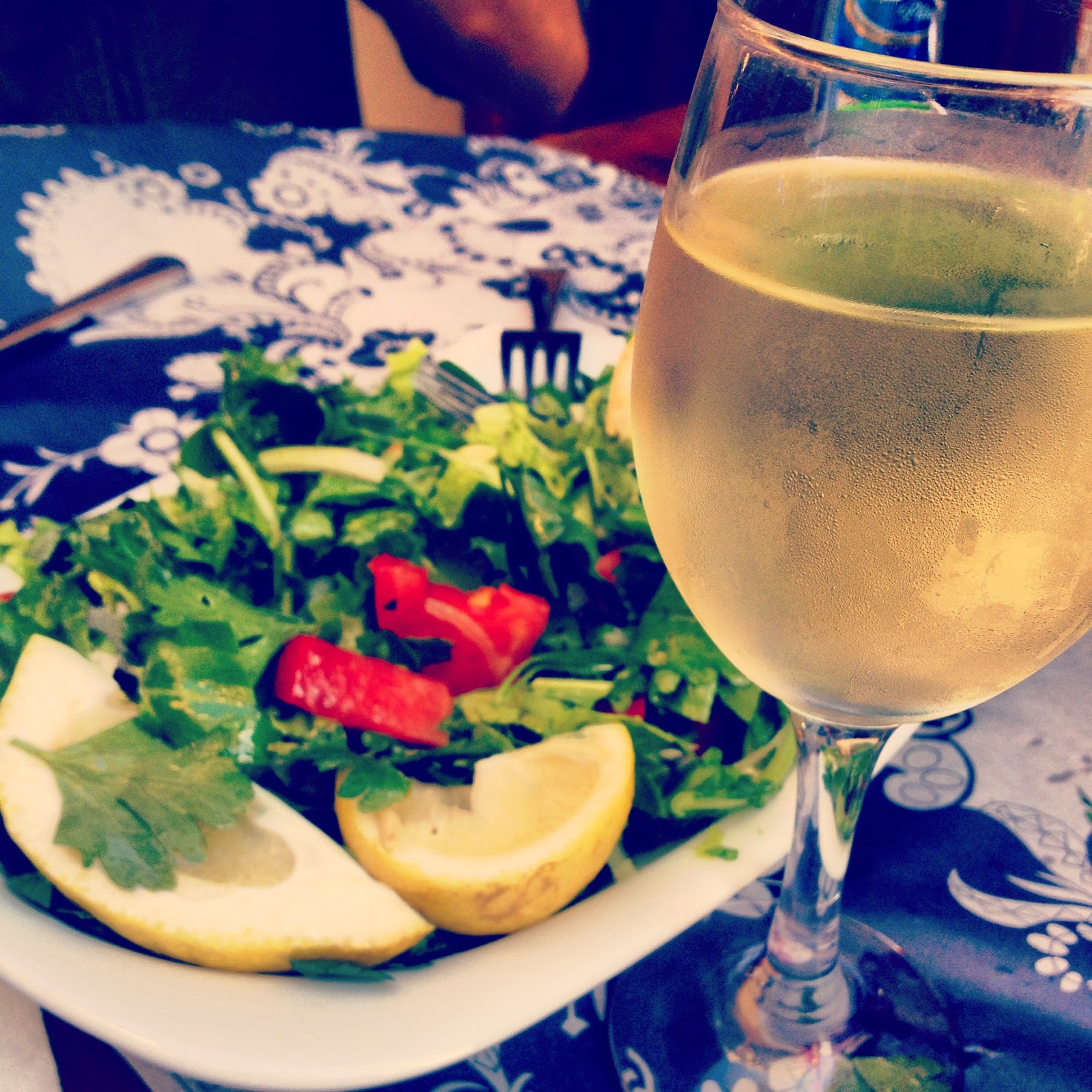 The people here love to eat out, and even when they do their cuisine is all salads and proteins, we never saw people gorge on breads or carbs of any kind! The street food consisted of Doner kebabs, which were slow cooked on rotating rods, much like the Lebanese shawarma meat. There were mussels being sold for a lira each. They had a bed of cooked rice with a fried mussel on top, all enclosed withing their individual mussel shells. Very interesting and quite tasty too.kokorec a type of large sausages grilled over an open oven and served on bread is a fun food on the go, and might I add very tasty. Fresh cut fruits sold at almost all tourist sites as well as fresh fruit juices. I don’t think any one drinks canned soda here, it’s just all so healthy, not to mention the enormous nmber of people walking around in sultanahmet and istiklal street, with the exercise and the healthy eating I was sure I would actually lose weight gorging on their food.

If you asre serious about Turkish cuisine and want a one stop place for everything authentic , then catch the ferry and head to the Asian side of Istanbul, because that’s where ciya sofrasi is. This place does a different meny everyday depending on what the chef wants to make, it all supposedly authentic home cooked variety of Turkish cuisine. The waiters and waitresses are super helpful and thay know English. Our waitress actually was a student  studying microbiology and genetics at the university! I went overboard ordering al that looked weird and wonderful.

Sour meatballs, which had bulgur, ground lamb, pieces of lamb cooked in mint and pomegranate juice a lot like Kashmiri goshtaba. The kashkek with lamb which was a lot like a hyderabadi haleem had lamb, beans, wheat and herbs. The stuffed dried vegetables are a must have , they are dried red peppers and dried aubergines stuffed with ground meat,rice, and spices. A lot of eateries have these dried peppers and aubergines hanging as garlands as a decoration.

A large number of maindishes were only vegetarian and cooked strictly without any addition of meats. A lot of people also opted for the mezze menu which again had a large selection of vegetarian dishes. There was hummus and babaganoush and the whole mediteranean palate.
Perde pilavi was a hard ball made of baked wheat dough much like the covering of our dum biryani. One has to break open the wheat ball to get to the rice and chicken preparation. It tasted like a very mildly flavoured indian pulav.

We ended the meal with a kind of baklava served with thick cream called sobiyet. The meal was a mix of so many elements and was at once different as well as familiar. The Kashmiri and hyderabadi cuisine had definitely borrowed elements from the Ottoman dynasty. But whereas Indian cuisine ids all about our breads and rice and rich gravies and curries, this was a lot lighter. 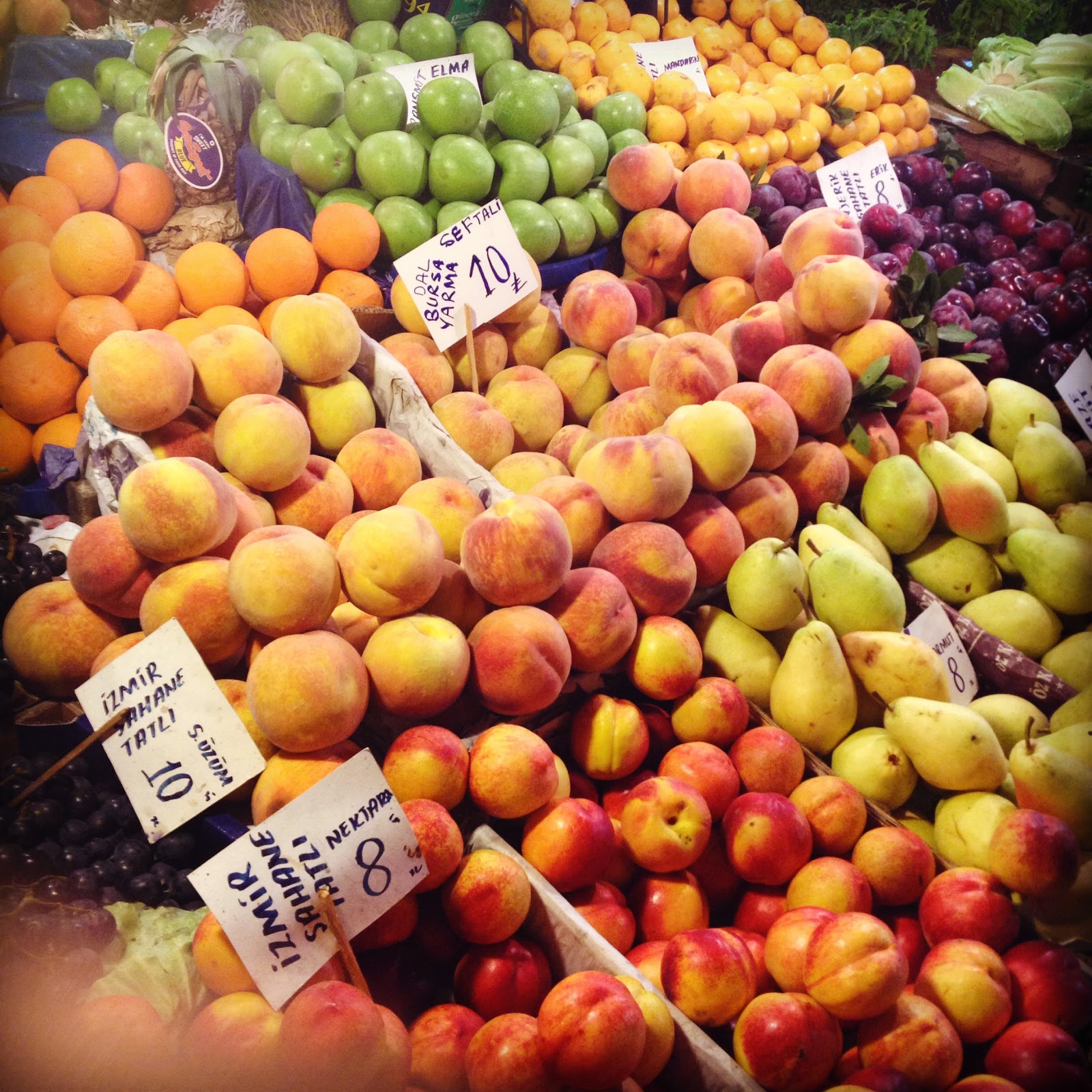 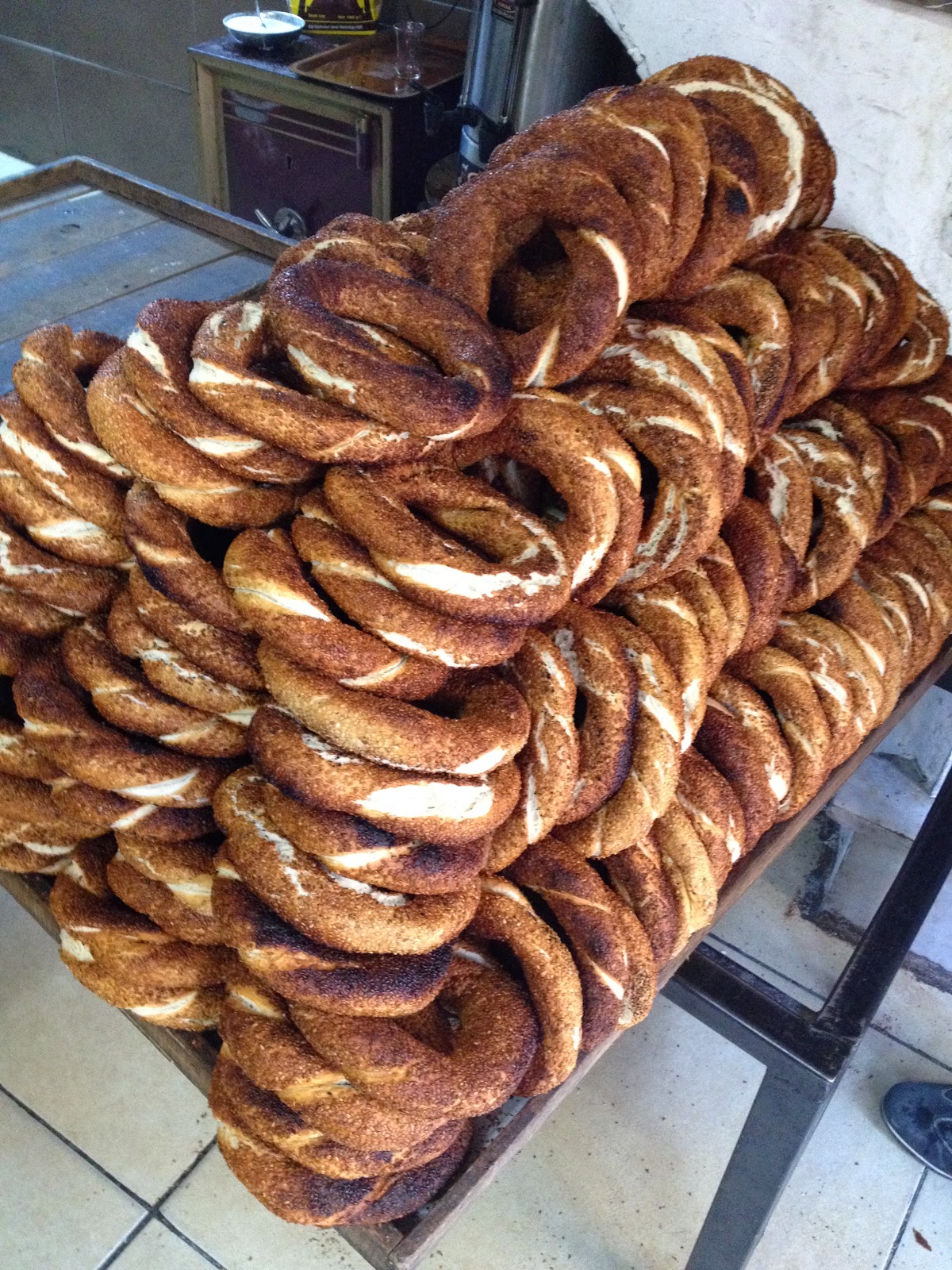 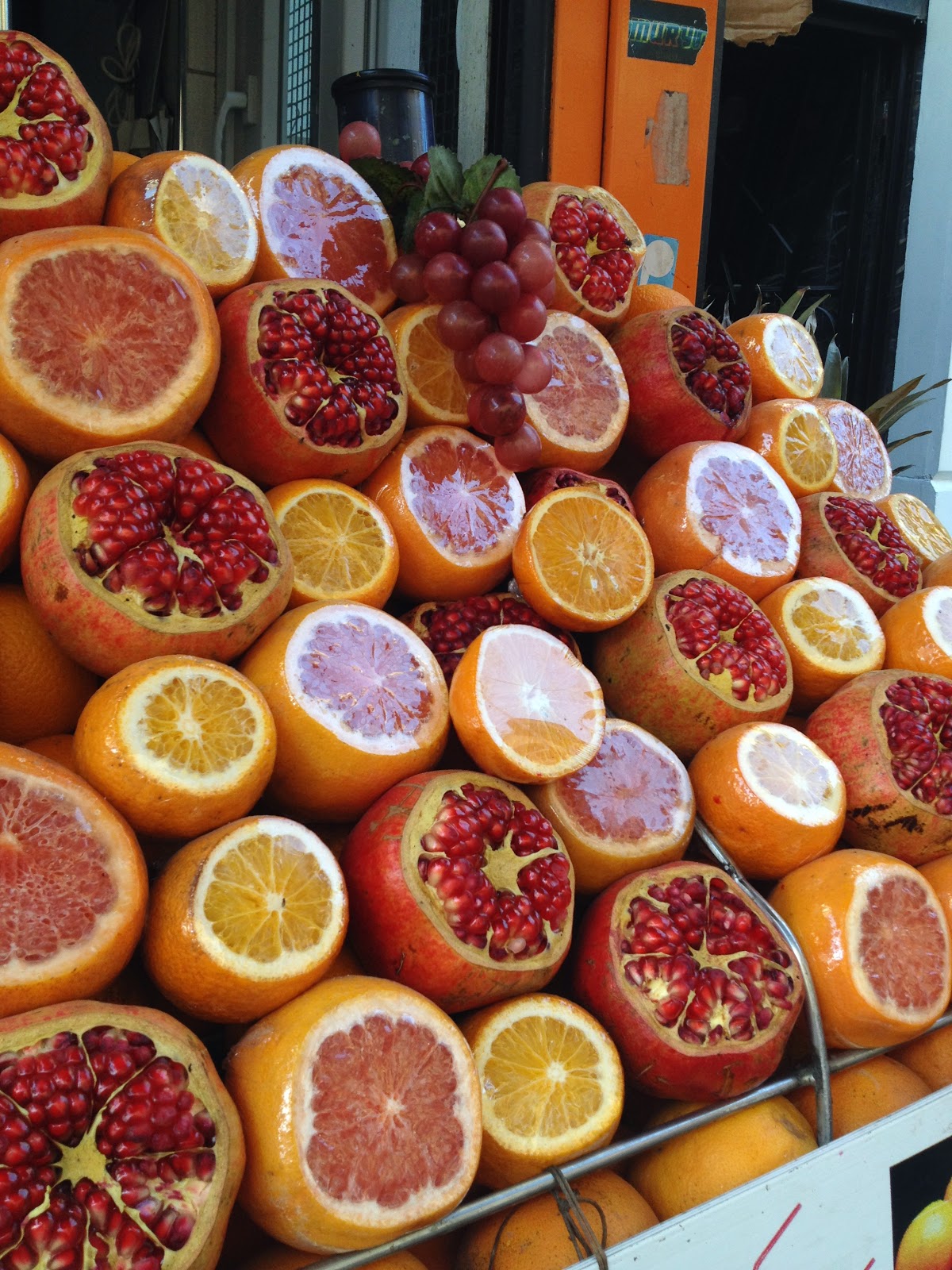 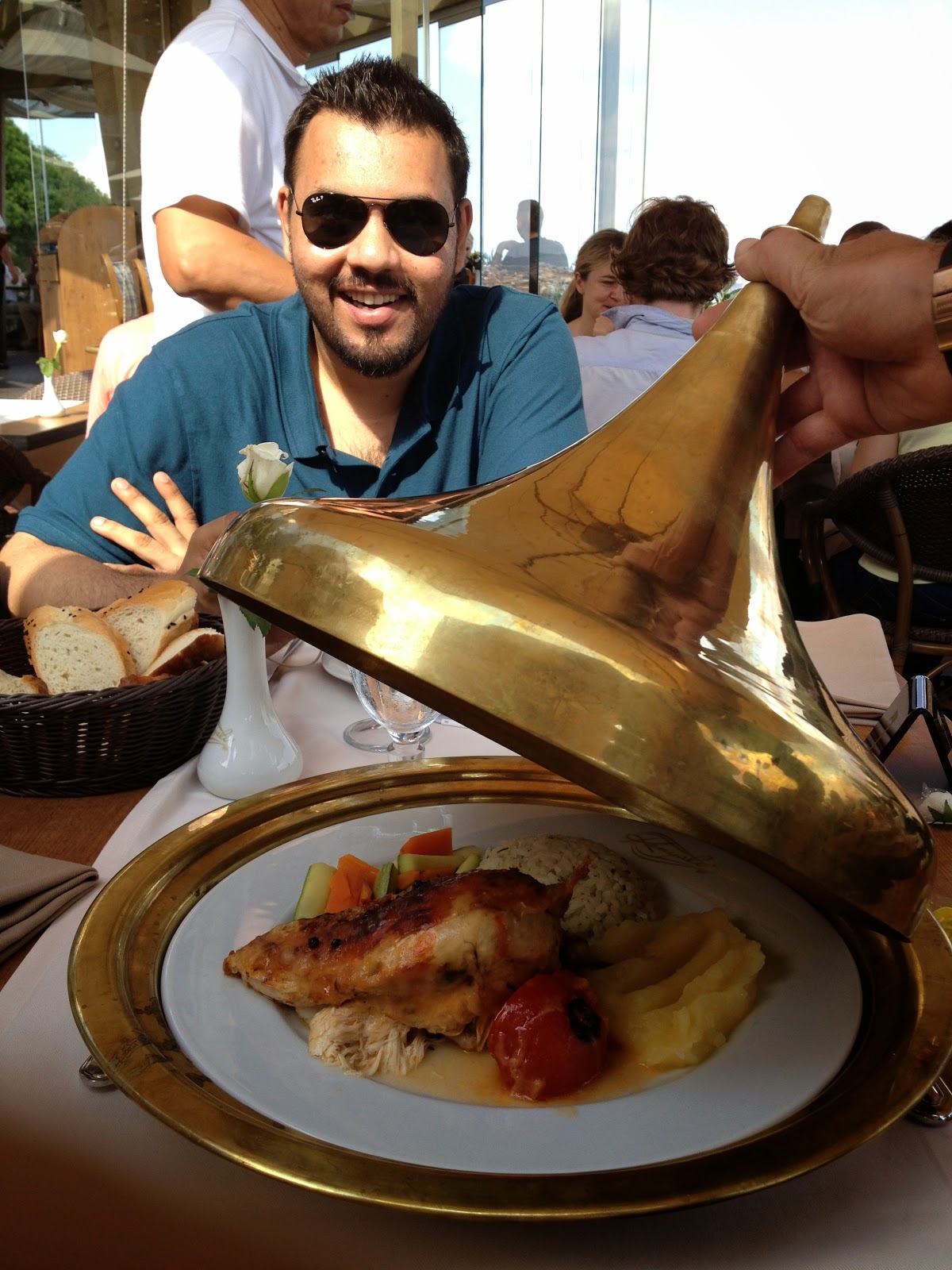 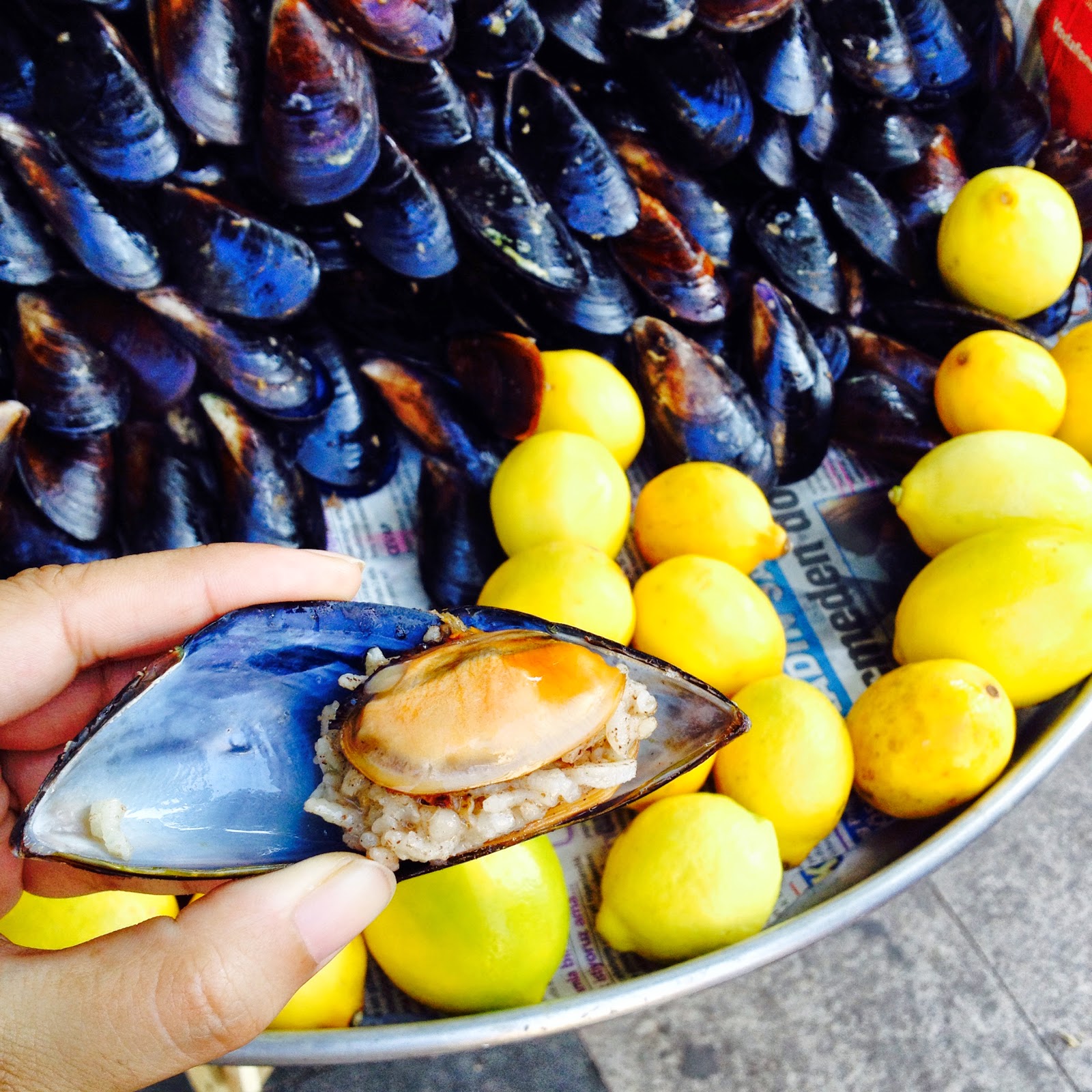 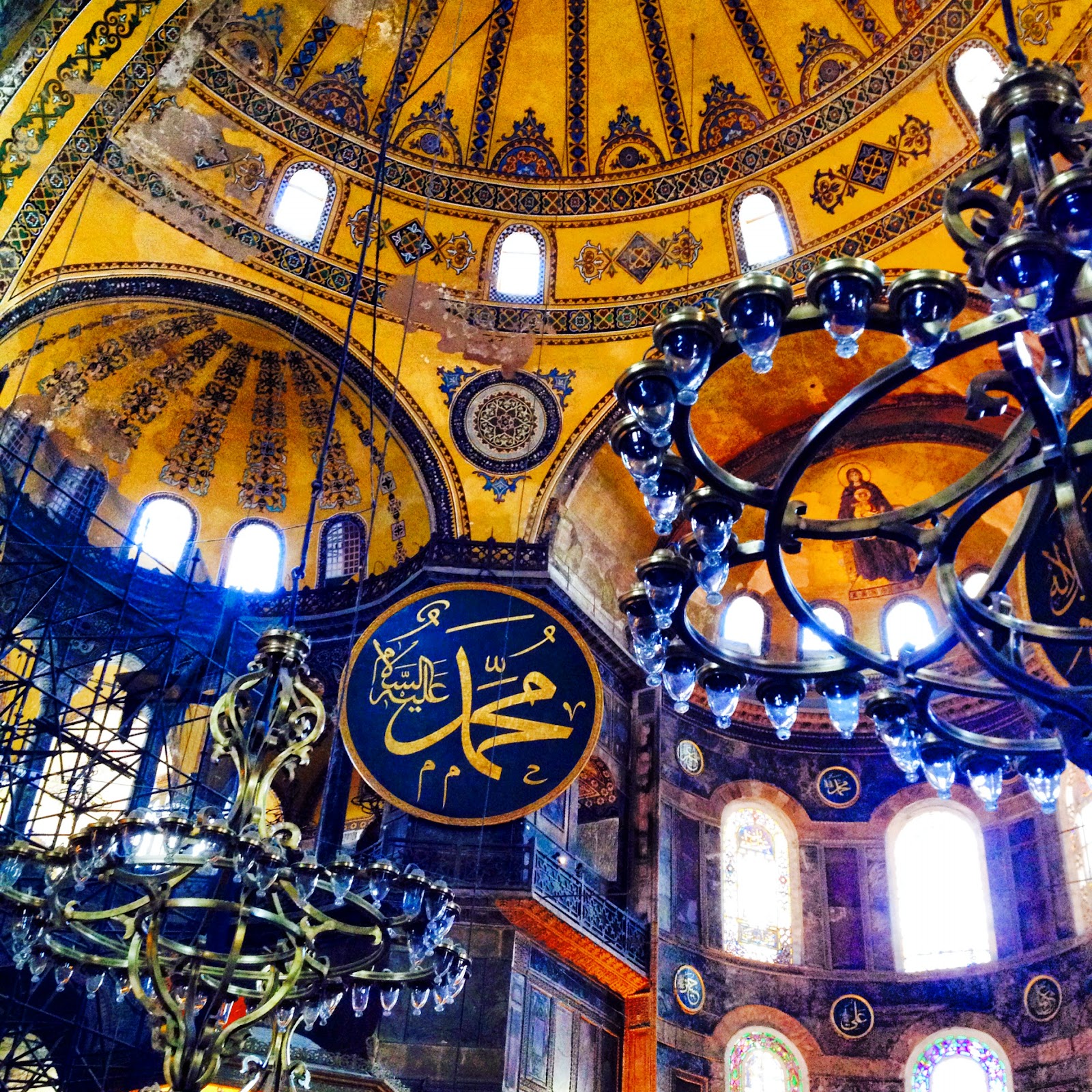 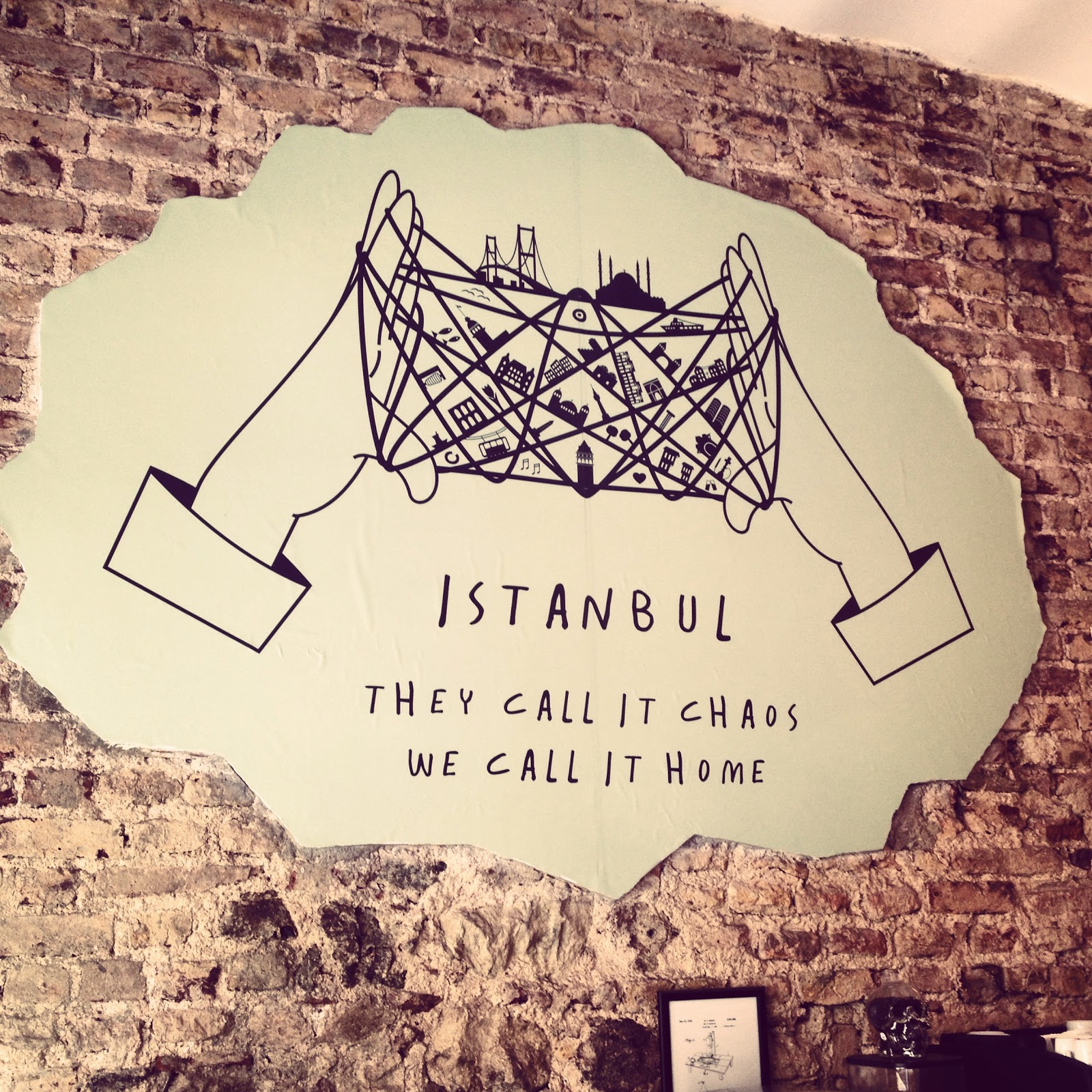 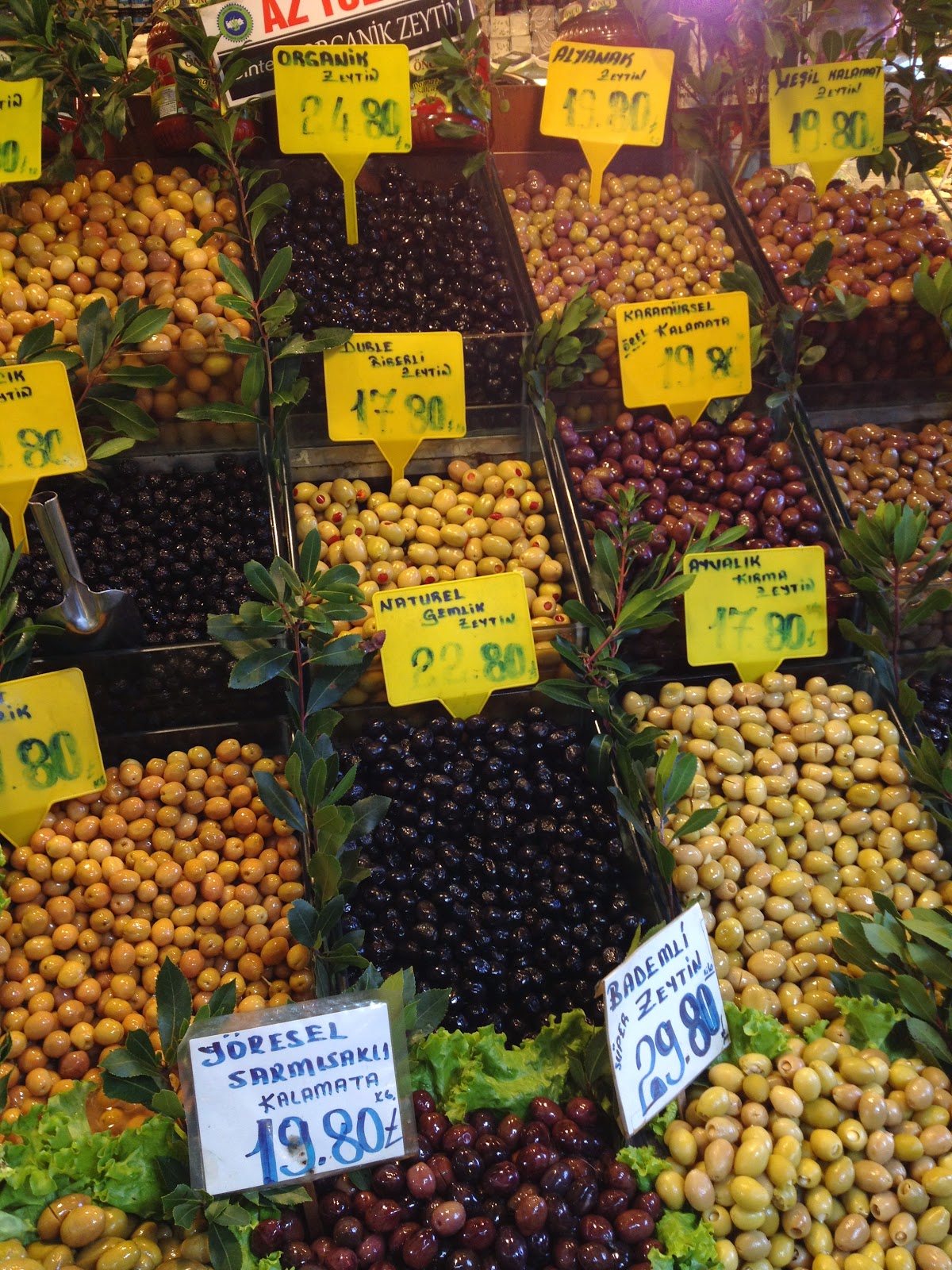 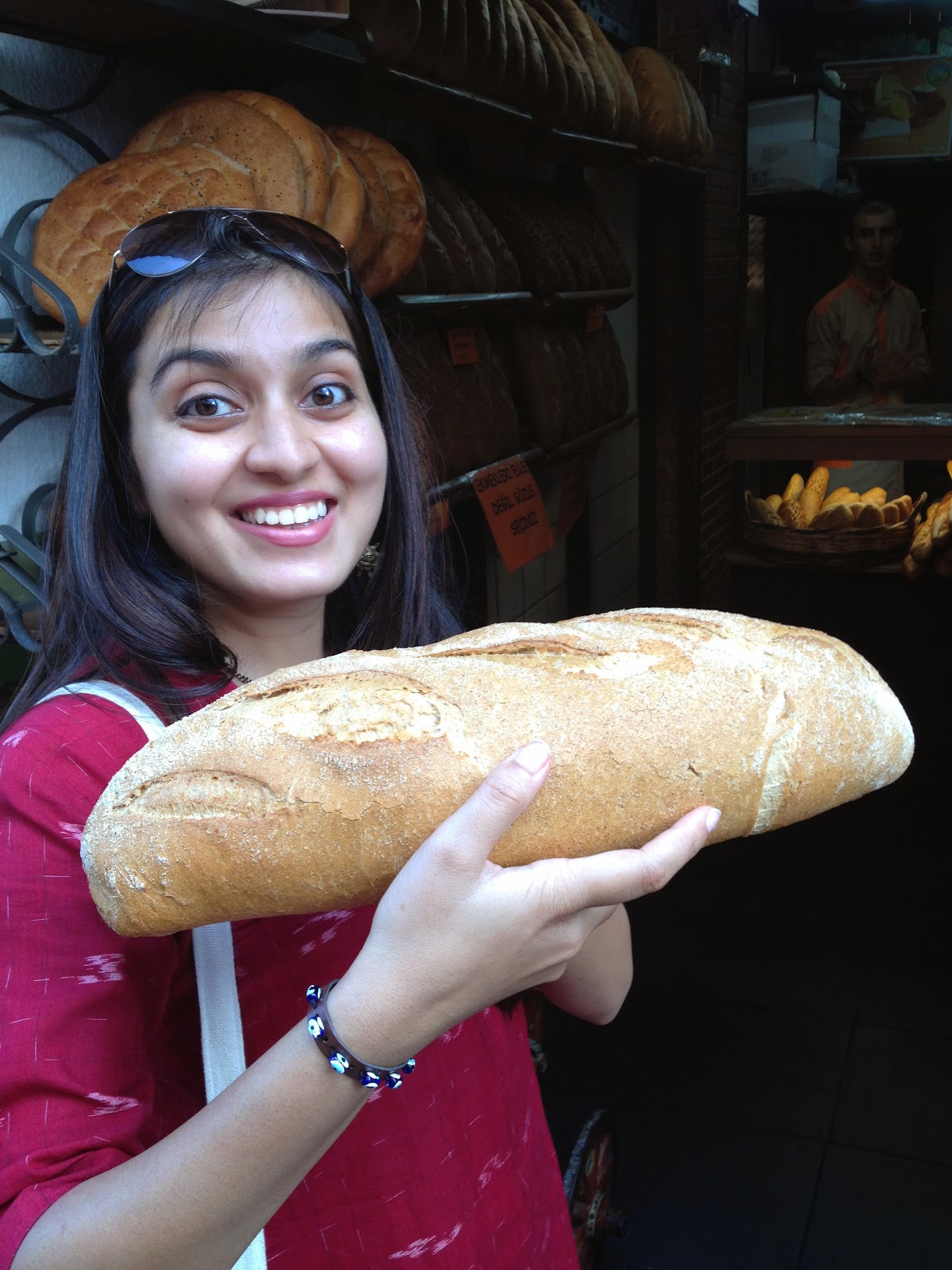 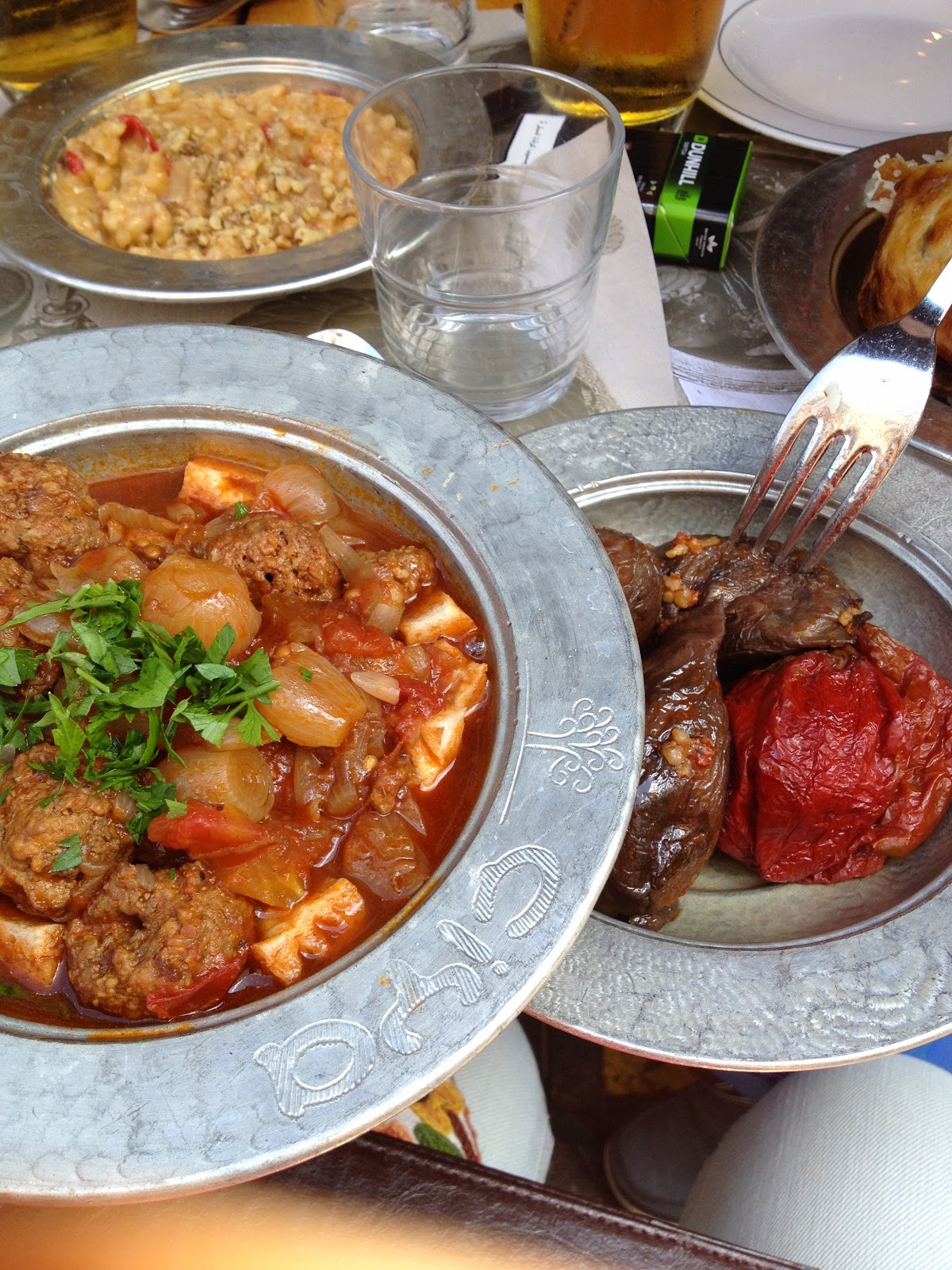 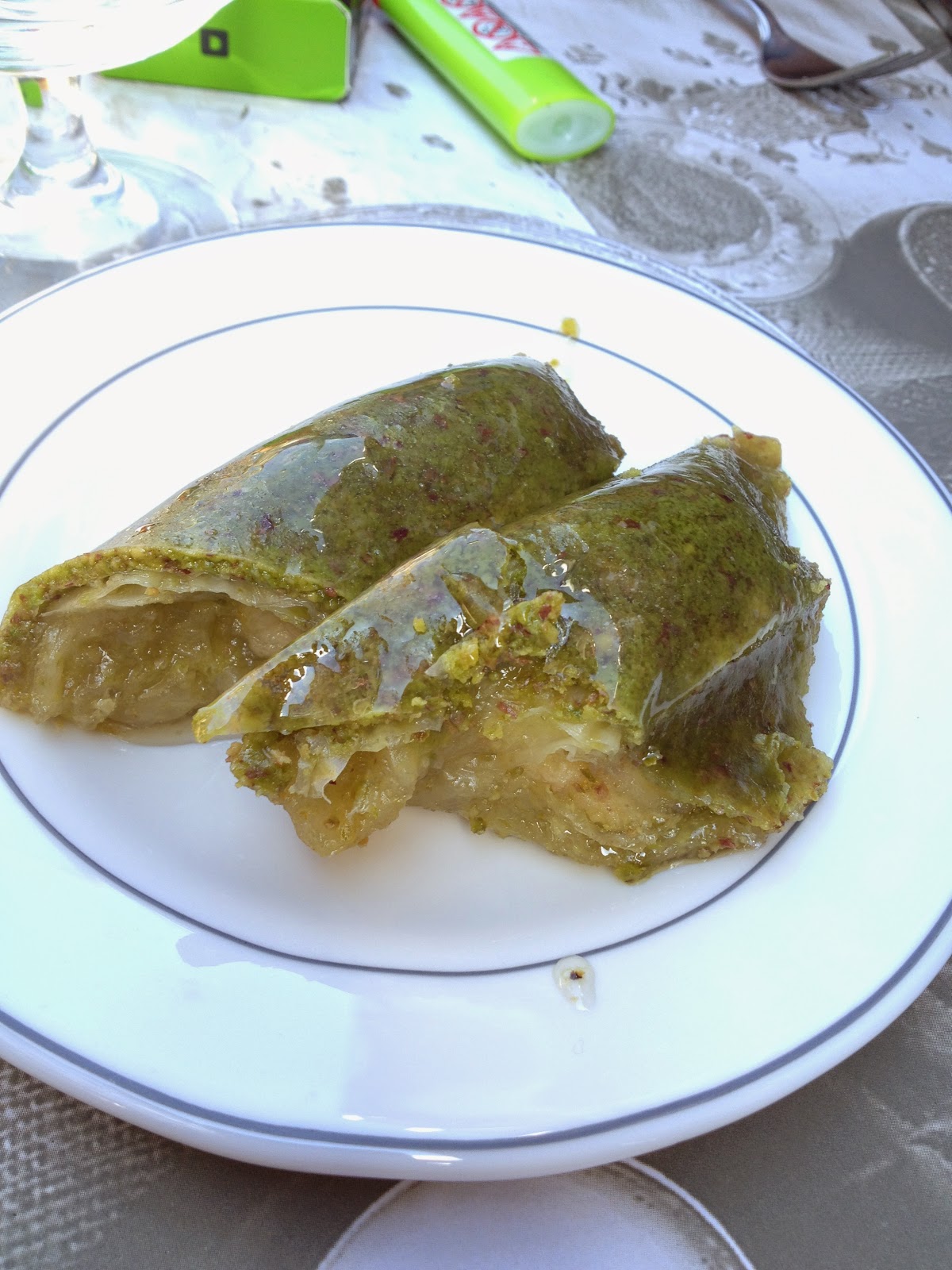 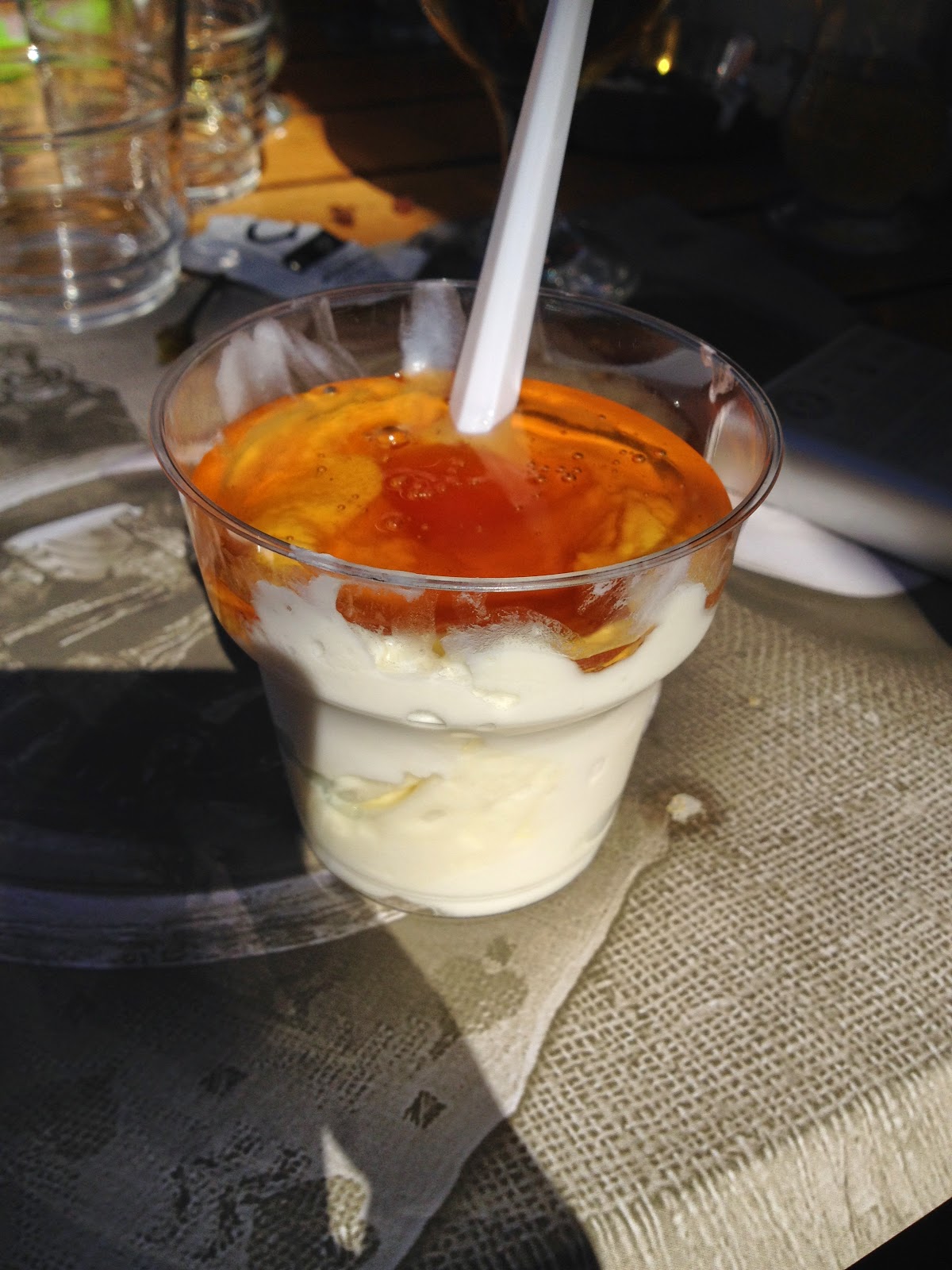 The day starts with a classic Turkish breakfast, and we had ours at the many borek shops. Borek is like a puff with layers of phyllo pastry. The flavours changed according to the stuffing; potato, cheese and meat, spinach or my favourite sweet with a dusting of sugar on it. It did seem to have tons of buttery goodness and working people took their borek on the go as well. drink some Turkish tea or traditional Turkish coffee to wash it down. They call tea chai too, and it is without milk and optional sugar. The coffee had a high sediment rate and afterwards the cup had a significant amount of silt at the bottom of th cup, and yet the heady aroma was enough to drive away any drowsiness. Another good place for breakfast was Mado, where a complete breakfast with olives and cheese and cold cuts is served. People also buy a sesame seed studded donut from the many ‘Simit’ selling shops. Simit was a doughy bread and a lot like the sesame breads of Kashmir. Some of the more touristy places also served simit with nutella.

We arrived in Istanbul during the fishing season and tens of people were seen fidhing on the galata bridge . The bridge itself was a teo tiered bridge with trams and cars on the top, while the bottom tier had restaurants and sheesha bars. Lucky for us we lived close to the fish market ‘balik pazari’ . this was no smelling bylane selling fish, it was a lane with restaurants and people selling fresh fish, no fishy smells, and also a few souvenir shops for trimmings. Nights in the balik pazari was like a fairy land, the lights, sounds and plate after plate of batter fried calamaris, shrimp casseroles, grilled salmons. It went on till the wee hours of the morning, people here love to hang out.

The area around the hagia sofia and the topkapi palace has a lot of eateries, enjoy a leasurely meal inside the topkapi palace overlooking the bosphorus at the topkapi palace café. For a breath taking panorama of the entire mosque surrounsings head to the roof top restaurant sultan terrace. The blue mosque requires for covered heads and knees to enter the mosque, they also don’t allow visitors during prayer time. We went late in the evening when there were less crowds and the evening azaan resonates across the mosques, while you sit sipping chai in the court yard.

The most famous exports out of Istanbul though are the sweets; baklava and Turkish delight. There were a mind boggling variety of baklava, both with pistachios and walnuts. They were rolls and flat layers of phyllo and baklava in all shapes , sizes and prices. The quality products don’t come cheap. I loved the one stuffed with whole pistachios. Turkish delights again came in a variety of flavours from chocolate to orange to rose, and then all varieties of dry fruits. The ones with flavoured water were cheaper compared to the ones filled with nuts. Dusted with powdered sugar , it reminded me of jujubes. Personally I liked the ones with nuts, and lots of it. Again the price ranged from 6 liras a box to 35 liras a box! Always ask to taste before you buy.
The area around galata tower is an eclectic mix of art and music, with bespoke shops selling canvas paintings, handbags and jewellery and also guitars, and drum sets. There is an interesting coffee shop here where the logo says :Istanbul , they call it chaos, we call it home. Even as the evening wears on and the shutters come down, the street is converted into a graffiti lane because of the painted shop shutters.
Istanbul is divided into 3 unequal parts, one part is the old city where the sulatanahmet, the hagia sofia, and the grand bazaar is, the next is taksim where the fun and the hip and happening party crowd walks the walk on istiklal street and lingers around the galata tower, and the third is the Asian part across the waters, where the sunsets over the west giving a glowing background to the silhouetted mosques.
Istanbul:  A land of contrasts and colour, of vibrant chaos they have made their own, a constant reminder of their chequered past. A land not unlike India.