In search of the corn-cob man

It was the summer of 2013 and I was bidding farewell to the temple town of Madurai after finishing my fellowship in Aravind eye hospital. As a farewell gift, my department colleagues gifted me a beautiful hardbound book called ‘multiple facets of my madurai’ by Manohar Devadoss.
Intricate ink on paper sketches of structures, temple statues and still life glimpses of a city steeped in culture,this book is a piece of art in itself. 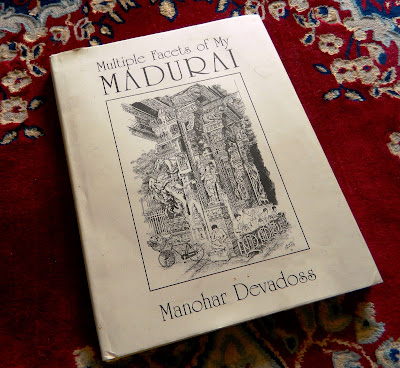 Madurai is home to the famous Meenakshi Amman temple, and the book had many illustrations depicting the myriad facets of the temple. One such sketch was of a diety with 25 heads and 50 arms! In the author’s own words “as many heads as a head of corn on the cob’ and I immediately named this idol “the corn cob man”. 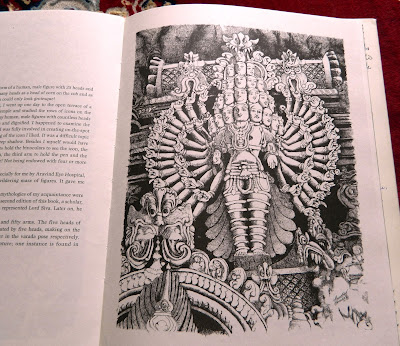 The meenakshi temple has a typical south Indian Dravidian style structure with four elaborate gates or gopurams surrounding  the main temple. Now, I had been to the Meenakshi temple many times before, and if anyone asked me to describe it in a sentence I would say “It’s too colourful.”

Pinks and greens and vibrant blues all vying for your attention. The ceilings have roses and lotuses and scenes from mythological stories in a happy kaleidoscope of colours. Personally I like my temples to be stark or at least monochromatic, they are less distracting in my opinion and allow for a more harmonious aura. Made of white marble or maybe brown sand stone or brick red even, I would take a grey stone temple, but Meenakshi temple with it’s many colours did not bring out the devout in me. Temples as a place for solace and sanctuary demanded a certain aura of peace and calm, but the Meenakshi temple with its free queue, 25 rupee queue , its 100 rupee VIP line and the special prayer for an extra fee along with unending rows of devotees being shepherded to move along while one got a glimpse of the devotee, the time to gaze on the idol directly proportional to the cash payment you have made was too much commercialization for my taste. 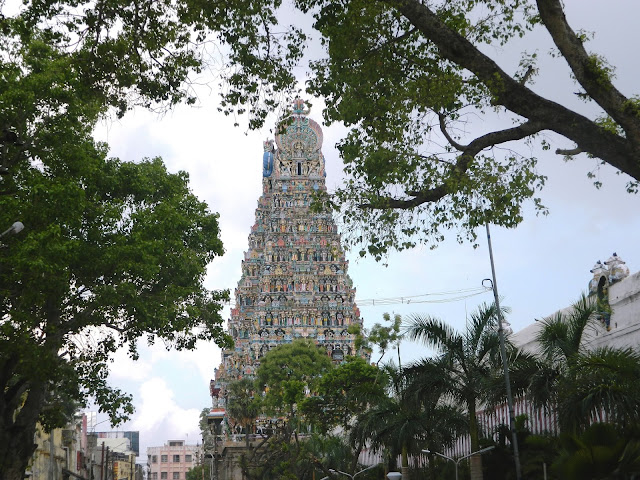 Nevertheless, on the last day of my stay in Madurai I made one last trip to Meenakshi temple. Not so much to pray, but to find the elusive statue of the corn cob man. The statue was supposedly situated amongst the three and half centuries old south Gopuram/gate, along with more than 1500 statues. I was determined to see what the author Mr Manohar Devadoss had seen, and I set out with my camera, hoping to use the zoom feature as a telescope of sorts.

A little about the author of the book, before we continue this story.

Mr Manohar Devadoss has an eye condition known as Retinitis pigmentosa (RP), an  untreatable condition in which the sight is slowly lost from outwards to inwards, until only a tunnel of vision is left, and slowly even that is lost leaving the person without sight. It progresses at different rates for different people. Manohar Devadoss was diagnosed with RP in the early 1960’s and since then his vision has progressively deteriorated. What used to take him 2 hours to draw earlier now took him a 100 hours of tedious back bending work. To give you a glimpse of how he achieves this feat, he wears +27 dioptre spectacles specially ordered from Australia (to understand how strong a +27 glass is, take your grandfathers reading glasses which are generally of +2.5 or +3 D strength, put them on, now imagine something ten times stronger than that, and it will give you a rough guide to a +25 to +30 D glasses). He sometimes places an additional +4 D glass for added magnification, or uses a hand held telescope. Since daylight is too strong for him he draws by night with special lights called compact fluorescent lamps, the heat of the lamps necessitating him to wear gloves.

This man, who by all medical and legal definitions falls in the category of “people with impaired vision” saw a statue of a 25 headed man with 50 arms, amongst a colourful confusion of over 1500 other statues, went ahead to draw and depict the same in his book. If that was not reason enough for me to head right over to see it for myself, I don’t know a better reason to visit the holy temple.


So on that fateful last day in Madurai, I made my customary rounds of the shiva and meenakshi sanctums within the temple premises, and even as I sat on the steps near the potramalai kulam (the pond of the golden lotus) which have always been my favourite place within the temple to ponder and reflect, or the hall of a thousand pillars another of my favourite places, I couldn’t help but find myself distracted by the need to find the ‘corn cob man’.

I decided to scan the gopurams/pillars as I walked along the outer periphery of the temple premises, my eyes seeking the unusual. Statues of many limbed Gods and Goddesses were stacked one on top of the other, stretching high up into the sky. Brilliant workmanship, exquisite details, and above all a marvel of engineering to hold up all that for more than three and a half centuries.


I reflected back on the first few days of coming to Madurai. My ‘North Indian’ friends used to ask me in hushed whispers over the phone “Is it true that the tamilians worship Ravana, the 10 headed demon from Ramayana?”  After my first Diwali in Madurai, I could answer that the Tamilians celebrated the return of the Lord Rama to Ayodhya on the auspicious day of Diwali with as much gusto as they celebrate their much loved festival of Pongal. Such was the fanfare during Diwali that I convinced my inquisitive friends that their fears of Ravana worship were unfounded.

But, looking at the multiple statues depicting the many limbed and many headed ‘Gods and Godesses’ I realised that The Dravidians did have a penchant for the multiple. But who was I to judge, as a Bengali, we worshiped a 10 armed Durga as well.

Every multiple handed statue beckoned me for a closer look, my neck craning upwards, with the dazzling indian summer sun in my eyes, I was all but ready to give up my quest. Not to mention the blatant stares I received from onlookers as a salwar clad girl with vermillion smeared forehead, did not walk head bowed in respect, instead had her gaze pealed upwards.

And then I found it! He was there! Just like in the drawing. A study in symmetry; 25 heads and 50 arms! I counted them all. I took pictures for posterity with my trusty zoom lens camera.

Mr Manohar was right, it was there, and in all my years of visiting the temple, I had not seen it. Of all the thousands of visitors that flocked in hordes each day to the temple, I wondered how many had seen him. The artist or the architect centuries ago might have thought up of such an idol, then asked the potter to make him one to resemble such imaginings, and then it was commissioned to be put up on the gates of a temple. So much thought and effort had gone into this singular piece of art and it had been discovered by me. I felt like Columbus (well almost). That feeling when you are cleaning out an old drawer, or looking through an old suitcase, and suddenly find something rare and priceless. who made this, and why, and how wonderful that it should be hidden in plain sight.

If you ever plan to visit Madurai I would urge you to try the idlis at Murugan idli, have the South Indian non veg thali at Anjapar, taste the inimitable Jigar thanda, try the fusion Dosa burgers, have a meal at any of the roof top restaurants around the meenakshi temple to see it’s resplendent glory by night. But above all I would urge you to go seek out the corn cob man, whose real name is Mahasadashiva, and marvel at the architectural brilliance of over three centuries ago. Travel beyond the obvious, see beyond what the guide books suggest, let the statues speak to you of a bygone era, of timeless beauty, of impossible imaginings, and art that transcends cultural boundaries.


if you enjoyed reading this post , you could check out more of my posts related to South India
the festival of chitirai thiruvizha here, or the typical south Indian sapad here , the fusion dosa burger here, the summer cooler jigar thandas so famous in Madurai here,about verdant and beautiful Munnar here, or a typical malyali sadhya here.