Every city and town in India has an MG Road and more often than not it is the lifeline of the city. Once upon a time Pune's MG road was where EVERYTHING worth happening happened.MG road is also fondly called 'mains' as in Main road, just proving it's popularity. It got so crowded that they made MG road one way, and the adjoining east street one way as well, then they made weekends a 'walking only zone' and no cars were allowed.(saturday evenings, sundays,MG road is closed)

MG road was what people did before Pune turned into a Mall city.

My memories of MG road is from my school days of window shopping, buying stationery at 5 star stationers, having pressed chana rom the street, insisting on the Midi and high boots for my birthday ( they were a rage following the movie rangeela) and eating veg chutney sandwiches at Marzorin.
So after shopping for all things under the age of 3 months, we decided to revisit all the old haunts.
Marzorin. Bhudani wafers and Kayani bakery.


There frankly is no way the veg chutney sandwiches can get any better than at marzorin, slim slices of fresh bread sans the hard sides held a sweetish green mint chutney and barely there slivers of tomato. Yes, it has been attempted by many in their bakeries, and sometimes even I have attempted it at home, but it's a Pune Original, unimitable. At just 30 rupees it is still the best value for money sandwich out there. Have the recommended chicken roll, a submarine sandwich with a sweet mayo and pulled boneless chicken filling, a perfect meal on the go. wash it all down with the famous cold coffee and a thick shake of your choice, and we were happy customers at a mere 150 ruppees.

After all these years, I discovered a secret; Marzorin has a washroom! one has to ask the behind the counter person, and they will take you through the kitchen, the storage with the empty cartons, and lo behold a very clean and sanitised loo! And it does say it's for the customers of Marzorin. just goes to show, every trip has a surprise find.

Next we went to Budhani waferwala. It is pretty much customary that if any one visits Pune they take back one of the budhan wafer packs, the potato shavings with cashews and raisins and a unique masala flavouring. I loved the tomato sev and was happy to pick those up. Now Budhani has undergone a lot of change since the times we were regulars; for one it is now divided among the three brothers. so you have three 'original budhani and bros' within 2 shops from each other! A sad but true story of the reality of the world, rifts in the family, I am sure there is a story behind it all, but was not in an investigating mood. The real trageduy of it all is the sad demise of the 'Jaali wafer' . Jaali as in the hindi word for net, and not the hindi word for 'false/fraudulent' . the Jali wafer was like many hashtags put together ##### that kind of potato wafers. The first Bhudani we went to did not have them, so we bought a whole lot of new chips they had like onion and sour creams crisps. We then surreptitiously went to the other two budhani brother's shops thinking that maybe one of them had been willed the famed 'jaali wafers' secret recipe. But alas, none of them stock it anymore.

Not to be disheartened we went across to East street to another Iconic, Pune original the Kayani bakery. None to most for their shrewsbury biscuits, but every one knows that their choco walnut cakes are the hot sells.
We were cocky enough to walk in at 7 30 in the evening, a time when there was still a handsome crowd awaiting their fresh bakes, but alas the choco walnut cakes were sold out. Armed with chocolate cakes, choclat muffins and kayani khatai biscuits we didn't feel the visit was a complete loss. 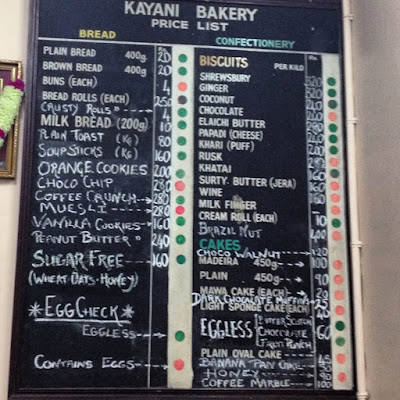 MG road is everything an old endearing relative is; the whole place shuts down like clockwork at 1 in the afternoon to open at 4 in the evening, not to be bullied into the new fangled idea of working on weekends, MG road shops stay closed on Sundays, The shops and store windows are still very much the way they were 15 odd years back, a few shops now have multiple outlets because of family issues, but all in all this is a wholly 'non mall shopping ' experience. Most of the shop keepers have known each other for generations, and have known their customers for generations. 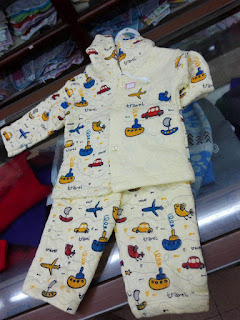 As we left 'needle woman' the man informed that we can come in for a change of colour and size of baby clothes. 'No bill required' return any time within 100 days. That pretty much sums up how the place works.
visit MG road for the Pune of yore when it wasn't so much a place for the young IT crowd , but more a retirement haven for the wisened.

shut on sundays, and afternoons from 1 to 4 .