Come Mahalaya, and every person with even a single Bengali chromosome gets into the pujo frenzy. For all those without the said genetic makeup it may seem like much ado about nothing, so here is a low down on what makes for the major part of Durga Pujo; Pandal hopping.

This is the advanced course in Durga Pujo, for the beginners course in the hows and whys of Bengali Pujo festivities , check out my post HERE

What is a Pujo Pandal; Groups of people decide to get together and form a committee, or ‘sangsad’ if you will, these people then decide to set up a sarvajanik pujo; YES sarvajanik is in the name itself, so everyone and anyone is invited. These sarvajanik pujos will then have a Durga Protima, housed within an elaborate Pandal, there will be a bhog lunch served everyday, a variety entertainment program organised every evening, apart from this there will be stalls of shingara and rolls, the balloons and childrens bow and arrow sets, and various activities through the day.

That’s a lot to take in. so what goes into defining a good PUJO you ask?
I give you the pujo grading scheme

First comes Pandal decorations: You may have heard the saying, “don’t judge a book by its cover” well it doesn’t apply here. The cover, or the pandal decorations is what draws the crowds from far and farther. Inspired by Thailand the whole place may be converted into pagodas, or a replica of belur mat, or even caves of the Himalayas to signify Durga Mas sasural (Lord Shiva's home). The only limitation is your imagination and how much ‘chada’ or revenue you have collected.

Second, but in no way less important is the Protima itself: The idol itself. Now what is important to understand is that Ma Durga is not only the revered Goddess among Bengalis , she is also considered a family member, thus, unlike a Goddess where you would not dare question her choice of attire, here every thing is debated and discussed.
“ki mishit mukhta ta hoeche” (she is looking so sweet/cute) a term you may not necessarily use for someone wielding 10 weapons which could kill you in a swat. Or “ki gaudy decoration, golden jama, kaash er kaaj ta e korte parto..” ( such a gaudy golden colour, why could they not make her wear the white bamboo decorations…)
On and on it goes , discussing Mahisasurs 6 pack abs, to the mice at lord Ganeshas feet. 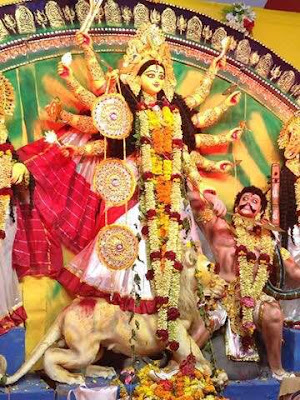 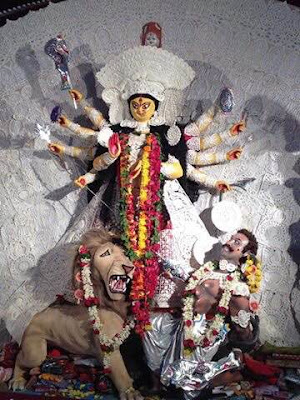 Third is the food available: There is the Bhog, which is uniformly good in most places, but the procurement of said Bhog varies. In some places they expect you to buy a coupon and stand in a queue and be served buffet style “ki crass, jata! mone hochche rationer line e” (crass !is this a ration line ,that we have to stand in line, that too buy our food coupons!?) , in others you haqve to stand in a line, but don’t have to show said food coupon, in others its still done the traditional way, a proper sitdown lunch served to you on plates made from dried leaves.

Food does not end at the bhog either. There are stalls of mishti , chicken roll, mutton chop, crab cutlets, prawn curry, mughlai porota, rosogolla, and something for the vegetarians as well.


Fourth is the variety entertainment at the pujo: This to some is what distinguishes a good pujo from the great one, who performed on ashtami night? So did you have Shantanu Moitra performing, or an upcoming musician who has worked as an assistant to Shantanu Moitra performing, this is what will reel in the ‘chada’ money. “pay up, we are planning to call a fantastic dance troupe all the way from Kolkata, a second runner up from Indian Idols season 3, and a rustic band of Baul folk singers from the interiors of west Bengal…”

Fifth is the crowd quotient: As youngsters, this is what matters most, where are all our friends hanging? Where are all the cute college girls and the dude guys in their kantha stitch kurta pajamas and bong swag going to be? Now a days, we check out the sari quotient of the Pujos, who is wearing what, how many banarasi saris did you spot at a particular pujo, or the number of Dhakai Jamdanis, and ‘heavy silks’ at the venue. It gives you a rough estimate of the social standing of the attending people, a great hunting ground for prospective brides and jamais in the marriageable age. A great place to source what are the fashion trends of the season as well, right from jewellery to handbags.

This concludes the five point grading system to a pujo pandal. If you feel out of depth amongst your Bengali friends or if you happen to be a Bengali but your genetic make up is being questioned because you don’t seem to be in the ‘pujo spirit’ , just choose any or all of the points above and quote knowledgably
.


“ The Pandal decoration of this pujo is remarkable, but the protima was spectacular in the previous one. Yesterdays variety entertainment was absolutely fatafati, and the chicken rolls were to die for….”

want to read more of my Durga OOujo blogs?

This is me getting nostalgic about Pujo

This is my childhood growing up celebrating Durga Puja outside Bengal