One of the striking qualities common to most New Yorkers I noticed was their love to stand in queues. Lines stretching around blocks, throngs of people waiting patiently in the cold or huddled under umbrellas in the rain, was what draws more crowds, like bees towards flowers.Some city logic said that if in one of the busiest cities in the world where everyone is in a hurry to get somewhere, if you can make people stop in their tracks and wait in a line for food/broadway play/music concert, then it must really be good, and this logic made more people get in line.

Maybe it was the comfort of having a warm soup in the cold winters and still chilly winters, or the fact that even in the ever popular age of take away and home deliveries aka ‘seamless’ eating, the ramen joints in the city demanded people to line up and wait their turn, whatever the draw; there is no denying the popularity of Ramen in New york.

Yes, people here line up for breakfast, lunch and even after dinner coffee and desserts , but no where are the lines longer, and crowds more diverse than at the tiny ramen houses.

Momofuku Ando first invented the instant noodles in Japan  in 1958, the rest is history, with instant noodles being named the greatest Japanese invention of the 20 th century.

Here are my three favourite picks from around Manhattan in no particular order.

Totto ramen: Yes, this place is popular enough to have many outlets we went to the one situated on 52 street between 8 and 9 avenue; this tiny basement kitchen cum dining doesn’t even qualify for a hole in the wall, it’s more of a hole in the ground. With a red door and a simplistic board announcing the name of the establishment , you could almost miss it. But you can’t actually miss the place, predominantly because of the hoards of hungry patrons waiting outside. Groups of twos and threes wait in line patiently to be seated, along with a few solo patrons as well. It is perfectly acceptable to come alone to dine in this place, because you are essentially sharing a long narrow table with other ramen enthusiasts, rather than a table all to yourself. They do have a few stand alone tables, but they are for larger groups of four or more, if you are lucky that is. The Ramen is great value for money, chock a block filled with shallots, spring onions, bean sprouts and their special noodles. Served in a chicken broth or Paitan, this comes to anywhere between 11 to 14 dollars. You can ask for extra toppings, spicier versions, and a chicken or pork version. They accept only cash, be warned. We had a waiting of about 40 minutes, but generally people don’t chit chat here over their bowl of broth, and things move on pretty quickly.Because the dining table is essentially a ledge next to the kitchen, you get the added fun of seeing your meat being char grilled by a hand held blow torch and the deft assembly of the ramen by the kitchen staff. for some reason they had blaring rock music as entertainment! 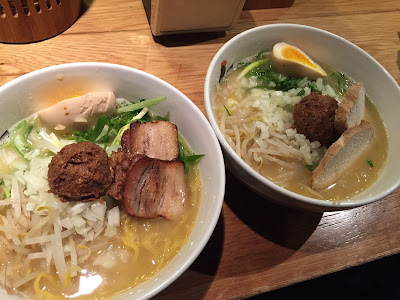 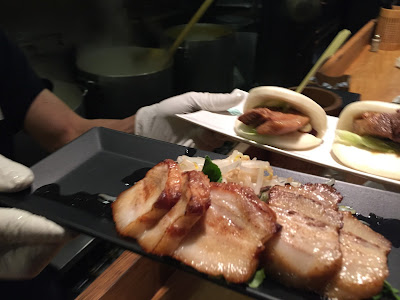 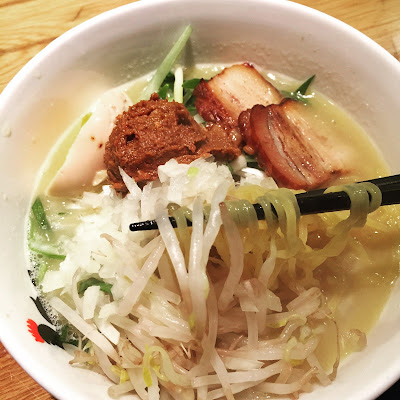 Ippudo Ramen: This sake bar has a tiny board in English , while it’s predominant board in a flair of Japanese sits proudly over the basement establishment. Again, the whole place is underground , almost as if the Ramen places were secret establishments, both totto and ippudo are situated below street level. We had a 2 hour waiting here! But unlike totto, we could leave our phone numbers here and they would call us. The reason this place has a longer waiting period is because people can sit and have a leisurely meal over sake and Ramen here. Apart from the bar stool type communal table seating, they even have stand alone tables. The ambience itself is warm and welcoming with red lanterns and wooden tables. The ramen broth even though more flavouful than totto, lacked texture in terms of shallots or bean sprouts, just a few cabbage leaves. I love bean sprouts and none were available here. In search of something to crunch on I asked for bamboo shoots at an extra charge of 4 dollars. Loved the silky rice noodles, of which we could ask a second helping at an extra 2 dollars.

Bassanova: Situated on motts street in the heart of China town, this place was distinctly non Asian in terms of décor ( or lack of it) as well as the cooks and servers. Pop and gospel music adds to the non Japanese feel. but as far as ramen places in new york go, they too are a basement restaurant, a non descripit board, throngs of ramen lovers, and a communal table to slurp your soupy noodles. Loved the broad wooden soup spoons, this place had the widest variety of ramens to choose from. We ordered the two new york times recommended variety, the lemon and the green curry. The lemon slivers were tender and could be had rind and all, not only did it look visually fantastic, they added a unique zing and cut through the pork fat. This place had the best charred pork or chashu. 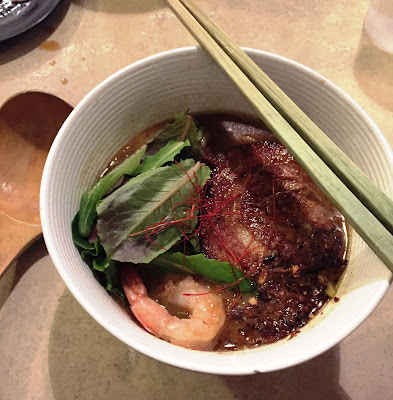 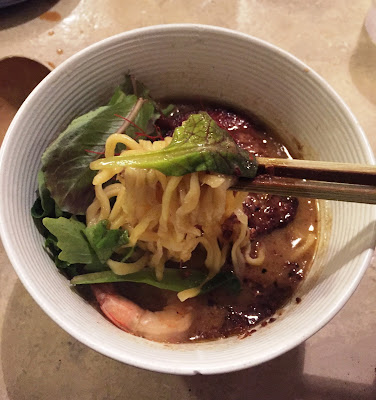 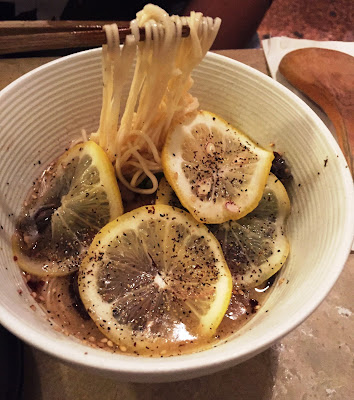 To summarize:
If you are on a date, go to ippudo, not only do you have nice seating, but they have some funky sake cocktails as well as several types of sake to make the conversation move smoothly.

If you are a hippy traveller and so is your date and love the kitschy streets of china town, and enjoy a not so run of the mill ramen go to Bassanova.this cannot be a first time date though and be sure she or he os not the kinds who is put off by open kitchens and B grade sanitation grades.

If you are in search of a halal friendly ramen option totto is your answer , since they have a chicken broth as opposed to most of the other ramen places in nyc which are tonkotsu ‘broth cooked over hours containing pork bones, tails hoofs and all’. All the restaurants have vegetarian options, but I am not sure if that is only for the toppings or the actual broth as well, though the one in totto says its made of shitake mushrooms and seaweeds.

Top picks : the Miso based Ramen in Ippudo and the lemon Ramen in Bassanova.

If you are an instant noodle fan and from India, here is my blog post on the much loved Maggi during the height of it's ban controversy http://foodietrails.blogspot.in/2015/06/the-childhood-friend.html

and if you want to do your own research on the best places for Ramen in NYC here are a few links to help
https://www.thrillist.com/eat/new-york/best-ramen-in-nyc