Few dishes are as universal the roast chicken. It is almost the national dish of England, it is a favourite for elaborate Sunday lunches, as well as fits in perfectly for a quick weekday dinner as well. you can go decadent and delicious with the dressing and the sides, or you can go clean and lean for the health conscious as well.
There is no doubt that chicken is a versatile dish both in terms of how one cooks it, to the way it is served up. Cluck Tales, celebrates all things chicken under the tutelage of chef Manjula de Cruz.

Ambience: Airy and  spacious, it’s located on the first floor of the building right opposite Don Bosco school in Panjim. With an underground parking space, you have no worries of parking. Situated close to the school, it caters to after school hunger pangs, or a quick treat for the kids. Close to the movie hall Inox, and open from 11 to 11 it caters to the odd hours of the movie goers. With an open kitchen concept, a bakery station right at the door, the place is all about the food.

Food: lovely chalkboard menus, in a simple easy to understand concept. The chicken is cooked skinless, and over hot lava stones. The stones are sourced from Malaysia and help keeping the chicken soot free, from the cooking, and incidentally the soot from roasts have been linked to cancers, so you might just be dogding abullet by eating the lava cooked chicken here. 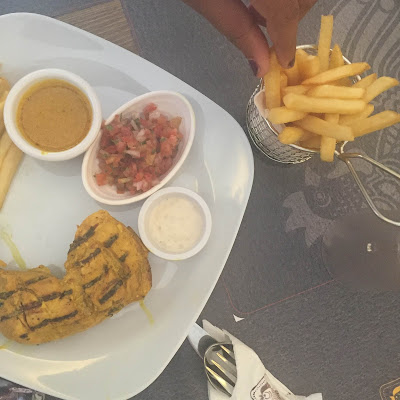 Going skinless, is a smart move because Indians have yet to acquire a taste for the crispy chicken that the Masterchefs worls wide keep raving about. We like our chicken clean, yet moist. This moistness is always due to the marinades.
But, before we get to the marinades, it’s time to rewind.
Our meal at cluck tales did not start at the chicken itself, what came first were the breads, the focaccia which had all the hearty goodness of fresh bakes, was something I would highly recommend.
The chicken chowder was surprisingly light, unlike some of the corn heavy varieties. A chicken cutlet, very much like the Bengali chicken chop and the Goan cutlets, were mince stuffed in a mashed potato covering and fan fried. What I would have loved is to see some chicken liver pate or fried to go with the crunchy ciabatta toasts, to celebrate chicken in it’s entirety.
Then came the signature chicken cooked over the lava stones. We got to see the actual stones as well, and they were nicely faceted and pretty looking as well.

There are the staple marinades on the menu like a vinegar based marinade , or a garlic lasuni marinade. And here is a tip, ask for the chef’s special for the day. some days they have two specials as well. on the day we visited the chef’s special was a hot sriracha marinade and the fiery marinade is a winner with the soft white meat of poultry.

They have custom made meals for a single person which has a serving of a quarter chicken, a side, a dip and fries. Also a bottomless glass of the fizzy of your choice.
So after you choose your marinade, choose a side. The sides you have a choice of potatoes in a dill mayo dressing, sweet corns, coleslaw, or baked veggies. I loved my zucchinis in the baked veggies, as well as the crucnchy coleslaw.
For dips, there are again a slew of choices, like a pink raita, or a guacamole dip, but for me the jalapeno jam is a winner all the way. Highly highly recommended. It’s equal parts sweet and spicy, and jalapenos are an inspired addition. For the uninintiated they have ketchup aswell, for your fries.
The whole meal is an amazing value for money. For 4 people with four dips, four sides and a choice of two marinades for 628, it was a steal, actually.
The best thing is that you are left feeling pretty light after the meal, with no stodgy carbs to fill you up, if you leave the fries out. Not a surprise actually since, the mother rooster of the establishment, chef Manjula was cooking for a well known football team in the UK previously.
Chef Manjula De Cruz is as unforgettable and impressive, than the meal itself, if not more. With her no holds barred take on food, and her strong opinions about her cooking as well as other peoples opinion about the same , she is a force to reckon with. If she had a TV show, she would give Gordon Ramsay a run for his money, enough said.

A Goan, who stayed in the UK for a couple of decades, it may be the reason for her love for a good ol’ roast chicken. She has come back home to roost, and we are all happy for the fact.
The meal at cluck tales, as I said, leaves you decidedly feeling healthy, a feeling a food blogger is not very used to. 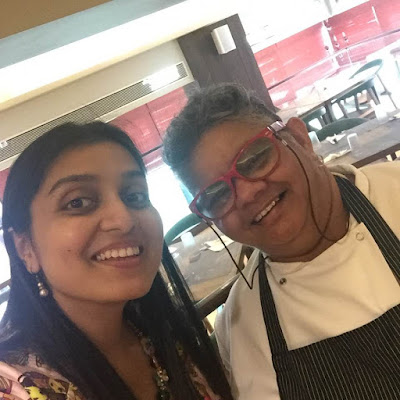 Thus, next came the desserts.

A green apple cheese cake, their signature pateis de nata, and a soon to be added attraction an Indian version of the apple straddle porota.
I recently learnt that pasteis de nata are a traditional Portuguese egg custard. It seems that while the whites of the eggs were used to starch clothes and such, the surplus egg yokes were then inventively used in desserts, and that was the birth of the classic pasteis de nata. Crumbly pie crust and soft pillowy custard is a dessert I would most certainly reorder.

The apple straddle porota, sent me on a nostalgic trip when my mum used to wrap a paratha with jam and cut it in pieces so that they were sticky sweet finger food for tiffin. These porotas have been influenced by th kerala porotas, and not the north Indian Paratha however, and these were stuffed with crunchy nuts and a syrupy caramelised apples. 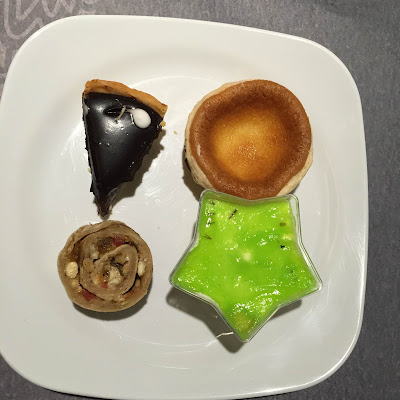 All in all a meal worth clucking about.
Rating:
Food: 4 plates
Service: 4 plates
Ambience: 3.5 plates