One of my fondest memories growing up, were the Sunday lunches with friends and family in the Army cantonement. While many of them were spent attending the gurudwara and then the langar, some were spent at some “aunty uncles place”. While we kids enjoyed playing “dark room” in one of the many cavernous rooms of the Army dwellings, or running around playing “hide and seak in the lawns, the ladies gathered their resources and assembled a potluck lunch. The food was a celebration of India on a plate, be it Punjabi sarson ka saag makki di roti, or Bengali chingri machcher malaikari, or the maharashtrian puran polis.
The Marriott Goa, celebrated 10 days of Indian cuisine, and it was an audio-visual as well as an epicurean treat.

They went all out in showcasing the bright and the beautiful of India, with Kutch designs on the umbrellas, chai kettles as décor, a camel as well as a cart adding to the ambience. 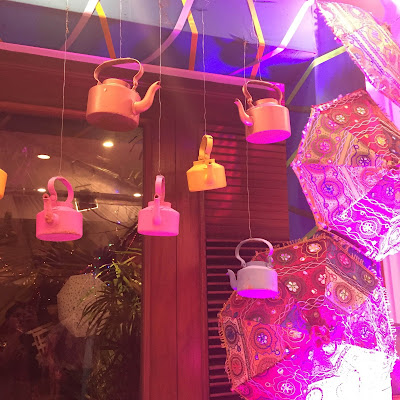 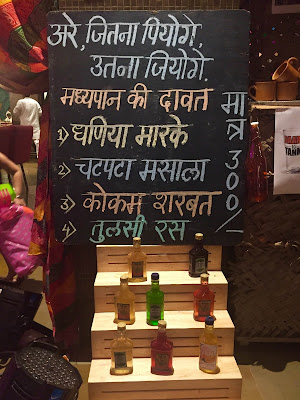 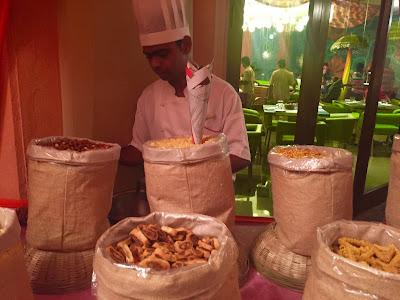 Walk in towards the entrance and you are greeted with the street food of India. I smiled to myself, thinking “ nice touch” expecting the sanitised versions of street food, so commonly available at the 5 star hotels. But one taste of my pani puri, and I am a huge fan of them, I realised, this was the real stuff. I asked the nam serving me, “bhaiya pani dena”, the lingo for “ can I have more of the spiced pani puri water” at the end of my plate of panipuris. He knew instantly that here was a lady who was used to eating at the chowpatty. He said “sukha puri “ bbhi hai. That’s when I knew he could not be one of the gentrified staff of the hotel. Now I am a regular at the Miramar chowpatty so much so that I have an account with  “chacha “ of stall number 19. This guy belonged to stall number 17.

We were informed that it was the Hotels initiative to go local , that they had outsourced the street food to the streets itself.

The sugar cane juice was spot on, interms of the use of ginger and lemon to enhance the sweet sugar juice. I unabashedly downed 4 glasses of the same. The perfect foil to the cool but rustic sugar cane juice was the coriander martini, served in the desi daru tharra bottles, but plonked upside down in a copper goblet fit for kings. The pineapple shapped goblets, the sprig of coriander and the drink were the high point of our dining experience, as it was a head turner with so many asking for “I will have what she is having” approach to our drinks. 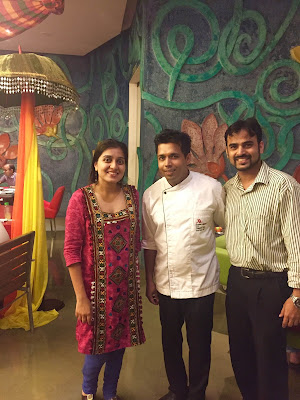 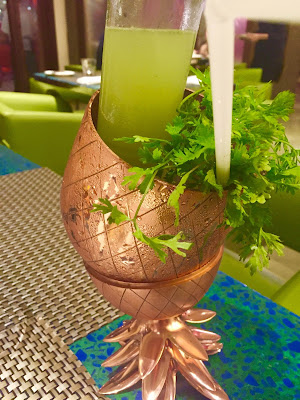 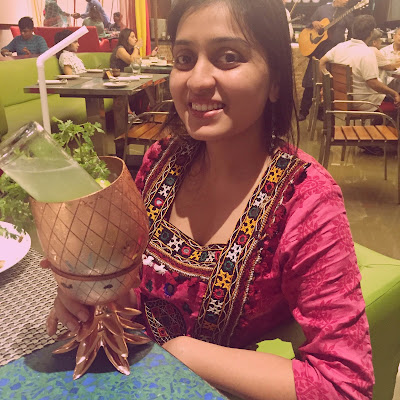 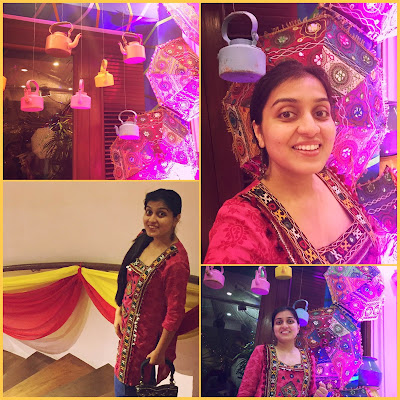 On the menu was gujarati Dal bati churma, the bati’s swimming in ghee, no let me correct that, not swimming, but positively drowned in ghee. And carrying the flavours of the west into the desserts the had Ghevar as well, a dessert not often seen in gentrified menus.

Many might remember my blog, the food that binds, where I extolled on the virtues of Yogurt or Dahi and it’s uses across India. I was happy to see 5 types of dahi being served at the buffet.

Biryani is for the most part, one of my favourite food and I have even famously said that it would be my last meal on earth, and these guys took their business of serving Biryani very seriously. There were three versions, the katchi ghost biryani, the hyderabadi mutton biyani as well as a vegetarian kabuli biryani. Cooked in dum and kept warm over a bed of sand, there was a certain attention to detail which was heartening . I also learnt the best way to serve biryani. Rather than just plonk bits and pieces of meat, rice and flavoured rice on a plate, the server first put some of the fried onion ‘birista’ in a bowl, then added plain biryani rice, then the meat, and then the flavoured coloured rice. Press the rice down , and then upturn the bowl onto the plate. You get a nice neat pile of biryani, with all the good bits in just the right proportion. Great party tip to use at home too.

.
The Marriott Goa is also keen on showcasing the Thalis of India, and Chef Ganesh got us an inspired Goan Thali, complete with Kismur, parboiled rice, fresh prawn curry and rawa fried prawns, pan fried pomfret, all of this served in their signature silver platters. 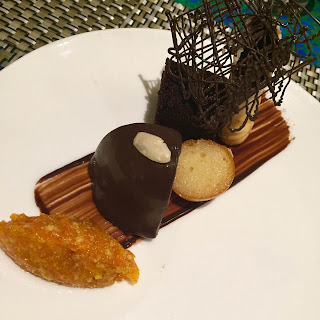 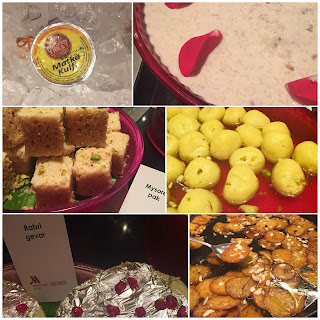 For desserts there was the length and breadth of Indian sweets from kheer, to raj bhog, to malpuas.
Chef Ganesh put together his “Charlie in a chocolate factory in India” theme by plating up a dessert which had all the makings of a signature dish. A beautiful quinele of gajar ka halva, a hemisphere of gulab jamun, sat preetily on a chocolate smear, with chcocolate mousse, gooye cake, cruchy pastry rolls, and oozing melted chocolate.

Indian cuisine has all the amped up flavours to make them international sellers, but it was the refined plating of old school food which is the face of the changing India, that was showcased at the flavours of India festival at the Marriott Goa.

Saransh Mehan the restaurant manager who has moved to Goa just 4 months back and Chef Ganesh Teli executive sous chef who has moved to Goa Marriott a little more than a month, were attentive and eager to please, they were keen on breathing new life into the menu and execution at the Marriott Goa. It was heartening to see that they have big dreams ahead, and the flavours of India was a successful way to showcase all that the new team is capable of.

In the end, Food and food lovers are the winner.