Master of food and wine, Mexican night at the Park

Every few months the Park Hyatt resort and spa in Goa, organises an elegant sit down dinner, with personalised place cards, thematic center pieces, and a select group of invitees. These evenings are called, the masters of food and wine evenings.

This time around it was a Mexican themed night at the park.

Now, on previous occasions at the masters of food and wine, the affair has been a fairly formal , but this time around we were greeted by the wait staff in colourful sombreros.The mood was definitely festive and even the décor was the playful piñata, made by the children from El shaddai, the NGO that the resort supports as part of their corporate social responsibility.

Margaritas Marked the start of the non somber sombrero night, even as ace mixologist Shatbhi introduced the patrons to the Patron tequila range. The evening reached a crescendo with latin American dancers and foot tapping music. 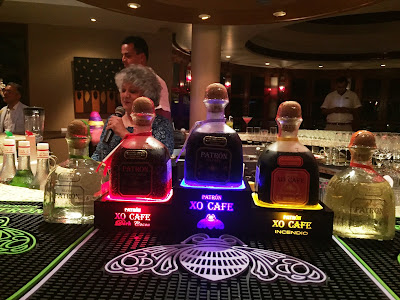 The meal itself was a nuanced pairing of tequila to four courses which celebrated Mexico and Latin America. What I often look out for are the elaborate centerpieces that the park always manages to create. This time it was a desert scene with sand, rocks and cactii, elegantly arranged in large glass bowls.

And it isn't just the centrepieces which set the masters dinners apart. It is the immense task of serving plated meals to more than forty covers. In India we are either used to beautiful alacarte meals but then it is rarely served in such a mass production, or else our meals tend to be more communal, with either a biryani or a curry which can be prepared in bulk. The task at hand to individually prepare some of the components of the four course meal was immense. 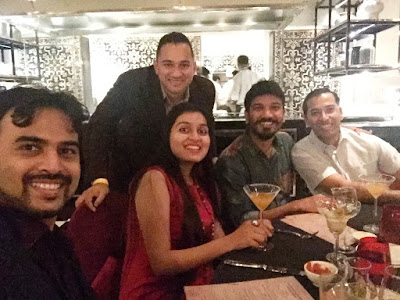 The first course was ceviche red snapper, served in a margarita glass, with the acidity of the lime matched by the heat from the chillies..

The next course was grilled prawns served with a salsa... and this is where the stress on the kitchen became apparent. Ceviche is still a dish which could be prepared early on, buying them time to plate and pass , but prawns are temperament and sensitive to matters of heat. Cooked too early and they would go cold, reheating them would make them leathery. The inconsistency were apparent and yet it was a beautiful foil to the tequila. The tomato salsa and the corn meal smear matched ... note for note in a masterful jugalbandi/playoff.

The mains is when things got interesting. There were two choices, a crispy skin snapper on a bed of rice and peas, with skillet sautéed mushrooms and pickled onions, and then there was grilled mixed veggies with sweet potato dumplings. We all opted for the fish, and yet as I took pictures of the vegetables on the vegetarian option, the reds , greens and yellows were fresh and vibrant and looked absolutely delish. My eyes did not deceive me, the vegetarian option was the uncontested winner in the mains. The fish fish was dry, mostly because we are used to having our fish and rice with some dirt of gravy/ curry /sauce , something to tie the dish together. Again in choosing to celebrate seafood the third time that night, the chefs had made their task difficult for themselves. A slow cooked lamb, a roast chicken pollo or even pork dish would have needed less individual attention, unlike crisping the skin on each fish fillet and then turning it at the exact time so as to cook it to opaque and yet not over cooking it. But more on the vegetarian dish.

The advantages of sitting at the same table as the managing director Shobhit sawhney , and being inordinately verbose about my love for the vegetarian option meant that I got a second main course. Much to my delight too, because those sweet potato dumplings deserved an encore. I had already sneaked one of Nolan mascarenhas plate, and had been craving for another one of those gnocchi inspired starchy dumplings. In fact this dish of two shades of zucchini and three colours of bell peppers and sweated red onions had a distinct Italian feel to it, a generous molten layer of mozzarella cheese or a good grating of parmigiana cheese and they can make it a regular dish in the Italian themed restaurant, Prego.

Dessert was a bit of a let down . maybe because of sky high expectations from the churros and tres leches combination. I love the sinful yet comforting sweet sponginess of a tres leches. A tres leches is at it’s core a sponge cake which is soaked in three forms of milk, and here the cake had not had enough time to soak, leaving dry sponge at the core of the cake. It needed perhaps ten more minutes and a more generous use of the milk components. The churros again are essentially deep fried batter, much similar to donuts, but are cylindrical rather than round, and generally ridged which allows for crispy deep fried bits, which are then rolled in sugar and cinnamon. The Churros were soft, more like the sweet buns we get in Goa.

The night was young , and spirits were high. The night was called to an end with Shatbhi, who had curated the Patron tequila cocktails, wishing Mexico a very happy belated Independence day, which had been on 16 september, a few days before the Mexican night event.
At the beginning of the evening I had been furiously clicking pictures of the margaritas, and the tequila bottles, so as to share them with all my blog readers, and my instagram followers.
I overheard some expats, or maybe they were foreign tourists staying at the resort, snidely remarking, “Indians must not have seen tequila before.” I let it pass.
But as the tequila flowed over the course of the Mexican night, I got bolder. At one point I carried four glasses to the kitchen table top, just so that I could get a better picture of them, I even coaxed a fellow blogger Fernando Monte d’ Silva to do the same. Proud of my country and what I do, I had no qualms of standing up to prejudiced foreign nationals.
As the event grew to a close, Shatbhi raised her glass and added “Viva Mexico” and we all repeated after her. I thought passed through my head, that somewhere in Mexico, half way around the world, someone might be celebrating India, and raising a toast to Indians. That is the power of food, because the tastebuds hold no prejudice. 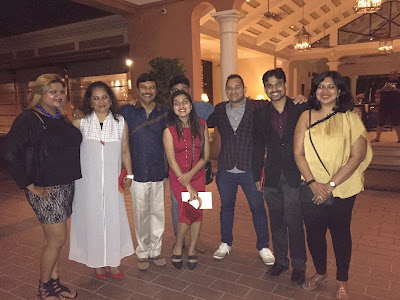 Thankyou for joining me on this culinary journey of a land across the world from us, and yet so familiar.