We spent a pre christmas dinner at fort tiracol heritage resort, and it was everything a meal in a fortress promised.
Fort Tiracol is in the Northern part of Goa, and is situated on an island, one can reach the place either by ferry or by a bridge, and just like most islands this one too has breathtaking views. the fort is situated ona height allowing for it to be protected against invasions in the days of yore.History says that it was a fort built and gifted by the famous Shivaji Maharaja to the king of Sawantwadi the Bhonsle's, in the 16 th century, to ward of the portuguese influence, and invaders. Ironically then that by 18th century it was finally invaded by the portuguese, and today the residents of the island are almost completely catholics, and there is a church in the center of the fort aswell.

Built in the typical Maratha style, the fort even has the morts, and faux entry details, made famous by Shivaji, but the most iconic part of the fort however is the church and statue of St Antony.
In a wonderful effort to keep the heritage of the place alive, as well as promote tourism it has now been converted into a heritage hotel. 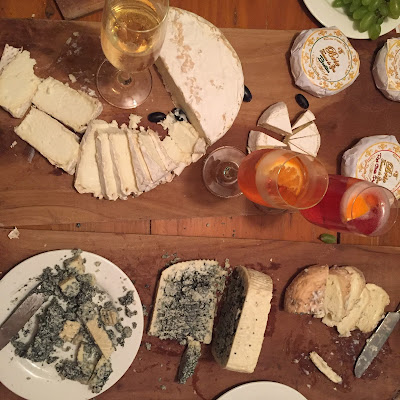 We started with getting our spirits high on Sula wines, I loved something called the brut Tropicale, and it paier wonderfully with the peppery cheeses on offer. 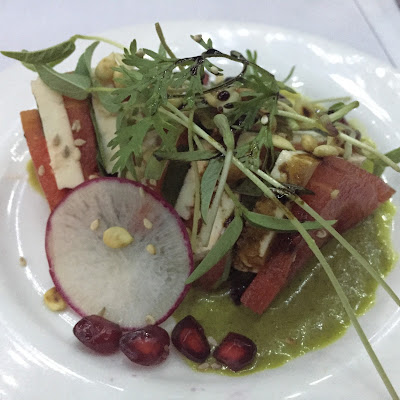 The first course was a watermelon and feta salad with microgreens and a mint chuutney. the watermelons seemed a tad dried, and it is but natural, since the dish might have required hours of prep, and cutting and plating for almost 40 guests. a problem at such large sit down meals. 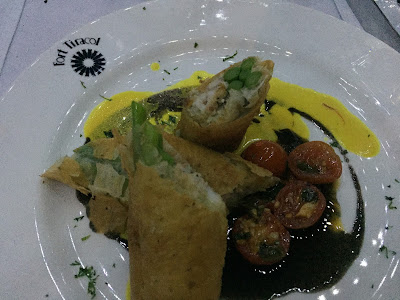 The filo pastry wrapped around succulent prawns and crisp asparagus was my favourite part of the meal. served with a black tahini and saffron sauce was impeccable. the asparagus was perfectly cooked. it reminded me of the line from the movie, a the hnnderd foot journey where the michelin starred madamof the restaurant holds up a wilted asparagus and says , " In this restaurant we do not serve a tired marriage , but a passionate affair." Being a huge fan of Asparagus , I was delighted to not just have mine, but stole a few off a neighbouring plate as well. I am known to eat extra plates. read about it 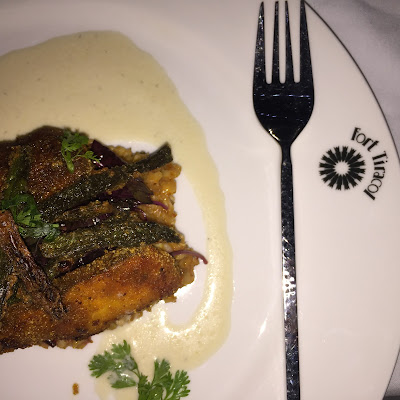 The next course was the ambitious take on the fish curry rice and goan pork sausage, and reinventing it as a chorizo risotto served with rawa fried sea bass. We Goans pride ourselves in the freshest catch of the day, and the fish in question here did not live up to it's Goan expectations. I commend the chef on his thought and idea, but it was lost in translation during execution. Again, this might just be the case because they were catering to a very large audience that night. Cooking for such a large group of people in itself is a feat in itself. 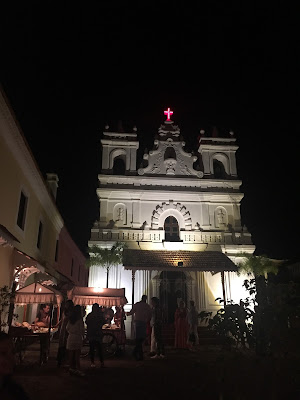 As mentioned earlier the setting of this oppulent meal fit for kings was the fort itself, with the lit church as the backdrop. 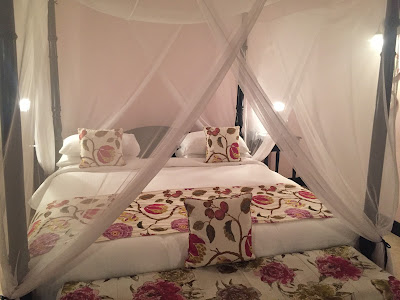 There are 7 rooms at the resort, each done up individually with attention to detail;, and named after the seven days of the week. the above is the Monday, and who would have said monday could look so inviting! 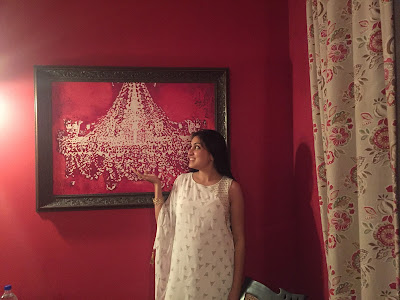 Midweek never looked as gorgeous as this wednesday wonder of a room. 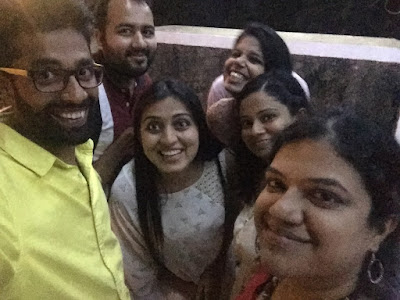 And yes, that is us, satiated after a happy meal, and a dinner table conversation ranging from what goes into the making of an energy drink, to the rise of a music genre caled Dubtrap, to the gaining of more followers on instagram. 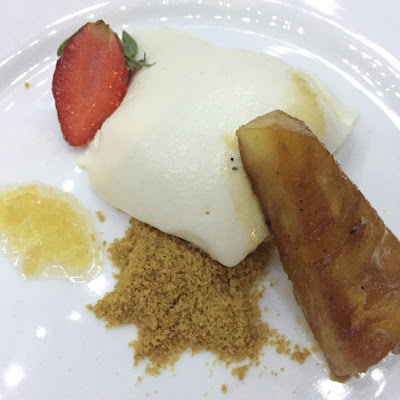 I end this blog post , with the finale, the dessert. a deconstructed cheese cake, made with silken tofu, with pickled lime, a grilled pineaaple, strawberry and ginger crumble for company. safe to say we started and ended the meal on a high. all the elements married perfectly, and truly brought this passionate affair wth food to a close.