Meeting the Mother of Exiles

It was a hotly debated topic “to visit the Statue of Liberty or not.”

We were on our international fellowship and the team pro visiting the statue of Liberty said,
“I have have been in new york for over two months now, and still haven’t seen the symbol of New york! The symbol of USA to the world! “

The team against visiting the statue of Liberty said,
“ It is nothing but yet nother grossly over marketed, big bold and brash sign of US consumerism. We have already seen the staue of liberty, on our televisions, on tee shirts , on coffee mugs, on table covers, and even on fridge magnets, we might as well visit a souvenir shop , click a picture with one of the life size statues and get done with it. Rather than spend a whiole precious day standing in lines. And correction the statue is not the symbol of new york, times square is."

It went back and forth , for weeks, until one fine day the team pro visiting statue, said, “fine, you don’t come, I am going alone.”

I decided to go along as well. Why?
It was our last weekend in US, I most certainly wanted to go somewhere, I realized if I went along, I might be able to hustle our way into the lines faster and then (hopefully) do a speedy round up of the lady in green, and then drag my husband to Brooklyn , and the bridge to my fav part of NYC. It didn't quite happen like that, as we landed up at china town buying 15 souvenirs of the said statue, but more on that another time.

“ Ok, let’s go, and make this quick.”was my reply to going to visit the statue of liberty.

As I had feared there were serpentine lines, EVERYWHERE! Lines to the ticketing counter, to get on the ferry, to collect the audio phones, to get back on the ferry.

Anyhow, once on the island, the husband went on his pilgrimage around the Statue. He plugged on the audio set and religiously listened to every entry and sound bite about the statue of liberty.

I flicked the channels, listening to what interested me, and changing channels from what I termed “ American history, not American, not interested." Yes, I was being a particularly bad traveller on that day. Sulking even. To be dragged out in the cold, seeing a statue, I had seen so many times on the dresser at home anyhow.

But, I learnt some very interesting facts about the Statue.
First that it was built by the same man who made the Eiffel tower (which I love). Second, it was a gift to the USA for having managed what most of Europe had still not, abolishment of slavery, as a testament that USA had done what other nations had not , out of the collective conscientious-ness of its public.

And the third was a poem at the base of the statue by Emma Lazarus.

“a mighty woman with a torch, whose flame is the imprisoned lightning,
From her beacon hand glows world wide welcome.

With silent lips , give me your tired, your poor, your huddled
masses yearning to breathe free,

the wretched refuse of your teeming shore.

Send these , the homeless, tempest tossed to me,
I lift my lamp beside the Golden door!”

The audio recording on the audio set was fabulous. I could feel the goosebumps on my back, and suddenly I saw the much marketed symbol of America in new light.

She was not about all that was bad in America, the overt show-offism, the blatant marketing, she stood for acceptance, she stood for unjudgmental open armed welcome of people from around the world. Countries like India, we blame America for the brain drain phenomenon, where our brightest head out towards the beacon of the statue, mesmerized by her beauty, but infact it is because the mother of Exiles, has always valued those who seek refuge.

I listened to the poem once more, came home and googled about it. And forgot to write a blog, though I had meant to about it.

I write about my experience today because there is a man with his ‘storied pomp’ living in his own tower of pomp, who refuses the exiles, because the very ‘symbol ‘ of American acceptance, might be relegated to being an American souvenir.

Well what do I care, you might ask. and true on that day while visiting the statue of liberty , I had the " not American, not interested" attitude towards the excessive merchandising of the American National pride, but by the end I realised the statue was not about America , it was about the people who came, from outside, who were welcomed, who were exiled, who had been tossed in the tempest.

And I realise that America today has the much maligned attitude of a 'big bully brother among nations' but it had started out by being a 'mother of exiles'. 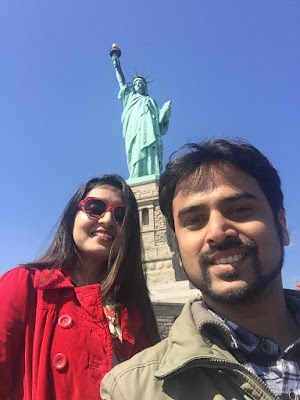