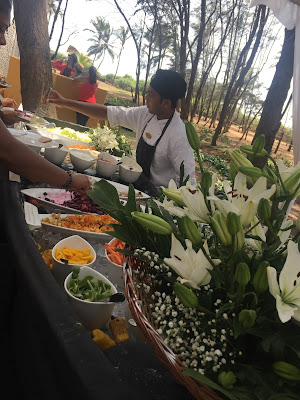 New York, the home to the size zero diet conscious, as well as home to the most audacious flavour combinations, and the most innovative desserts .
On our visit to the big apple these were some of the fancy desserts that I took fancy to. 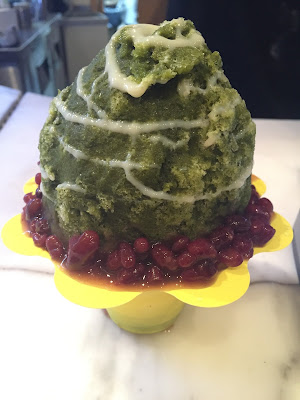 Much ado about Matcha: The whole city is crazy about the green stuff. the powdered green tea extract, is used in everything from gelato, icecreams, coffees. cakes, and even macarons.The green tea plants are grown in the shade for three weeks, and that leads to increased formation of Theanine and caffiene, such that it contributes to a kind of zen like state of calm energy. plus the added benefit of anti oxidants and anti ageing properties green tea is blessed with. This Matcha and cranberry frozen dessert was a humongous serving, and I loved the tartness of the cranberries against the herby flavours of Matcha, but honestly I am not a big fan of green desserts. 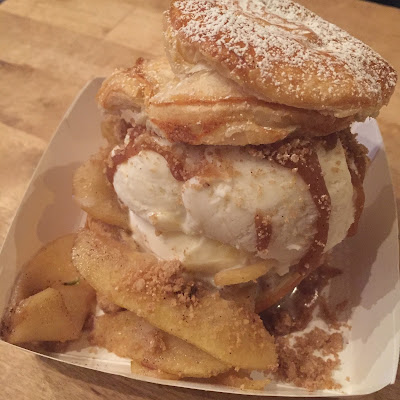 The croissant icecream: Icecreams served between baked breads is not a new concept. There have been icecream sandwiches , and even the local Italian favourite of a gelato within a Brioche bun, but icecream served within a flaky buttery croissant? That is Newyork in all it's decadence. Layers of puff pastry rolled out with butter, served with stewed apples, nut crumble and icecream, what's not to like about this one?This one was quickly finished by all of us. The familiarity of the flavours helped. 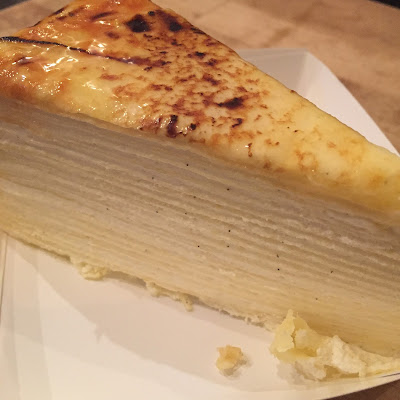 Crepe cakes: On our visit to NewYork in the spring of 2016, crepe cakes were all the rage. While I write this blog post I am not sure if it is still true. Crepes are a form of pancakes, in fact they are made from the very same ingredients pancakes are made of; that is egg ,milk, flour and sugar. and yet the consistency and the addition of raising agents change their texture and even the taste. Newyork Loves its Pancakes, if you follow any new york instagrammer you will find atleast one picture of a stack of pancakes, and they need not be food bloggers, just about everyone in New york loves a stack of pancakes, be it for sunday breakfast or post binge hangover cure, and so a stack of crepes were the obvious evolution from a stack of pancakes. these crepe cakes come in all flavours tooo, from berry to nutella. 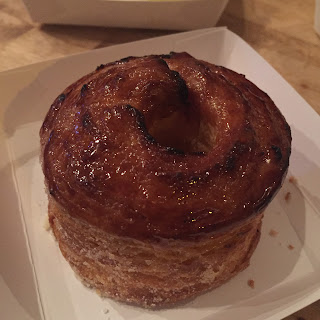 The cronut: Now this dessert got pretty famous, infact the whole trend crossed over the oceans to India aswell. the cronut is a cross between a crosissant and a donut. a crosissant is a baked dish, while the donut is traditionally deep fried, and if I am honest this tasted like a croissant with a whole. the texture is flaky like a croissant, and since this one stuck to the traditional cinnamon and sugar donut flavour that was the only donut reference I could find, other than the ring shape. 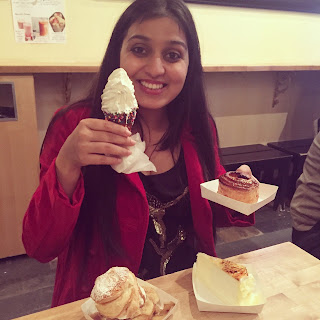 This picture is just to confirm that yes, I had all of these desserts, and yes, in one epic dessert crawl across town, and in my sugar haze have forgotten the name of the place where we tried them. in my hand is the churros cone. a churros also belongs to the donut family, in the sense it too is a deep fried batter, and this time intead of a round as in donut, or the traditional ridged sticks as in churros, we had a ridged cone shaped deep fried icecream cone, coated in cinnamon and sugar for added calories. 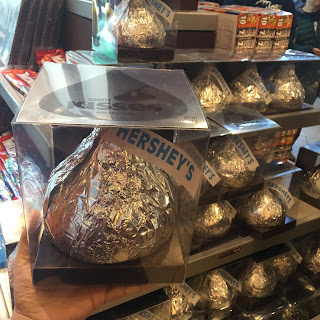 No story about New york dessserts can ever be complete without a reference to the hugely popular Hersheys brand and the Kisses that are at the heart of this popularity.
while Hershey's and M and M's are found in every single airport duty free in the world, the stores on times square are a treat in themselves.
situated right across from each other, this is a chocolate lovers dream come true!
huge Hershey kisses, which need a hug just to hold them, and M and M stuffed toys and the M and M 's in shapes, sizes and colours possible were the highlights of my visit to these two stores. 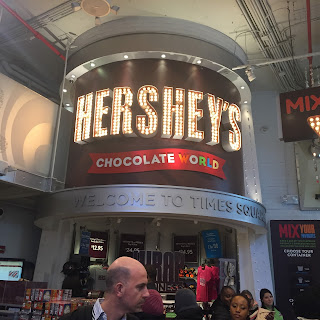 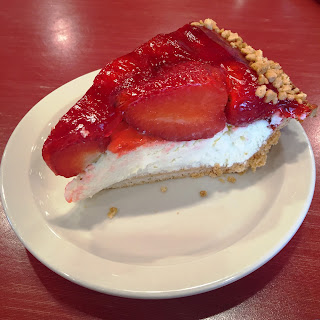 Another dessert that New Yorlk Cannot live down is the New York cheese cake. we were told the best ones were at Juniors in Brooklyn and we made the trip to this iconic eatery. It was truly a museum of cheese cakes, they even had pictures of past presidents who have eaten the cheesecake here. They say you know you have made it big, when you make it to timessquare, and there is a huge Juniors cheesecake store in Times Square. But the brooklyn diner is just a slice of retro all its own. the classic high chairs, the scuffed floors, the writings on the walls in the washrooms, everything adds to the aura surrounding the slice of cheesecake. How was it? Somethings need to be savoured , not just written about. There is definitely a largese and a generosity of spirit that brooklyn is famous for, that one can see in the cheesecake and the toppings.

New York is a foodies paradise. From adventurous patisery chefs and chocolatiers, willing to try extravagant to outlandish creations, to an experimental food lovers who are willing to try everything once, and are willing to wait in line a full block long if they have to, for appreciative food bloggers and instagrammers just waiting to blitz the next creation to social media hall of fame, New York has it all.
This was by no means our only dessert trials, we had so many cupcakes it is not even funny, a whole box of 'baked by Melissa's' over even before one could say "baked by Melissa" .

do share your favourite desserts and the outrageous ones in the comments below.

some more of my New York escapades

The day I met Kim Kardashian

my thoughts on the statue of liberty