What intrigued me about the Novotel Goa Shrem Hotel, was it’s social media hashtag #goaforkids , and being one of the few mom travel bloggers from Goa, I needed to find out more. And so we headed to Novotel to spend a child friendly weekend staycation.
Now, while I live in Goa, reasons why you as a traveller to Goa would want to choose Novotel is :
1.       It is two hotels for the price of one, the Novotel Goa shrem (also known as the Novotel hotel by the staff) and the Novotel Resort (also known as the Novotel resort by the staff) are just a km away from each other. And while we mistook one for the other, and it can be confusing especially at check in or even booking your rooms online (yes, makemytrip has two separate Novotel properties listed in the same geographical area. ), it works out great for the stay. You get to choose from double the number of restaurants as well, as the easy shuttle between the hotel and resort allows you to swim in two pools, and even use the play gym and other facilities.

2.       Both properties are in the lively North Goa, with plenty of restaurant and shopping options, and while both properties are not situated on the beach, free shuttles are available, to and from the Candolim beach. 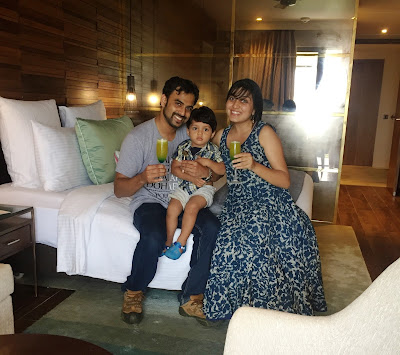 Now why do they say they are great for kids , to find out read on.

So we decided to check into the hotel at around 12, so as to time our two year old’s lunch and sleep time, but things did not go as planned (when do they ever, especially while travelling with toddlers!) .
Just as we were locking up, we realised his sippy cup was missing, crazy minutes were spent searching for it, as the little one started to chant, ‘jol jol jol’ (water water water) , until we found it under the side table . If we were supposed to catch a flight we would have surely missed it. Next he slept on the hour long journey to the hotel, in the car seat, which meant , no nap time at the hotel. (want to read how I pack while travelling with my toddler, and amazing tales of the potty chair? Read HERE )


Hmphh.. I wasn’t sure we were off to a great start, but our welcome to the hotel was worth it.

We were staying at Novotel Goa Shrem, and Resha, Zizele and Cyrus were all there to welcome us. Resha had thoughtfully framed a picture of us three and it rested on a stand in our room, along with tons of edible goodies for baby and mama. (dad’s on a diet you see) Zizele was sweet enough to get a family pic. It’s so difficult to get those when one is travelling, one of us is always behind the lens, and we were grateful for the pictures which will remain as cherished memories of our stay. Cyrus then took us on a tour of the Hotel, they have four classes of rooms. The suite is nice, but as it is a duplex, the chances of Shreyu following his nursery rhyme Humpty dumpty was a high possibility , we opted for the luxury room. Room 1404 has the best view, in the hotel, so if you can, book that room. 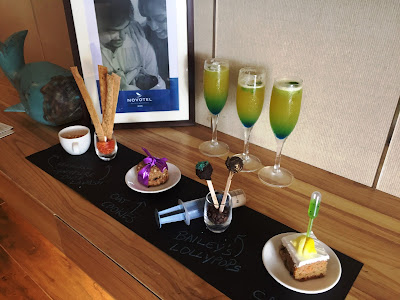 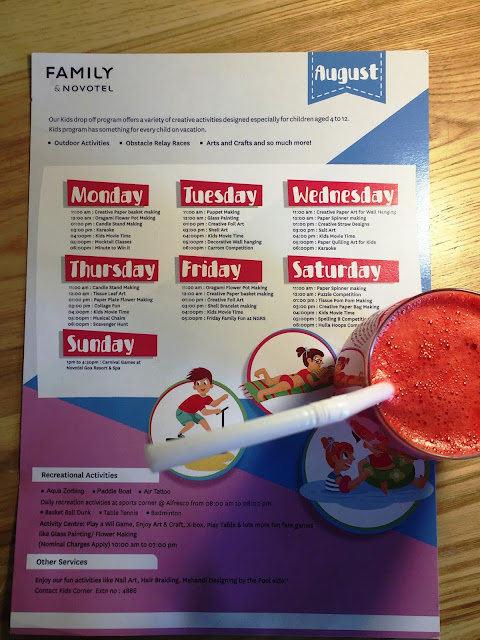 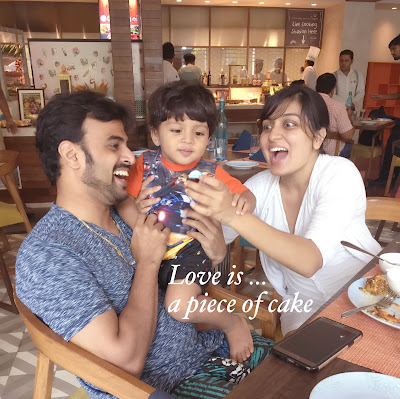 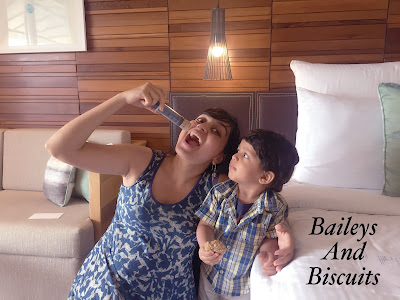 Now for babyproofing review of the room:
1.       The electric sockets all have guards on them.
2.       The balcony railings are narrow enough to prevent him from squeezing out.
3.       The bathroom did not have a latch and it meant that he kept going in to flood the bathroom with water; the bidet faucet attached to the toilet was his favourite. Yup we had to call room service to clean up the mess (aah the luxuries of life, to have someone else mop up the flood, and wipe off the biscuit crumbs!)
4.       The bed was immensely jumpable, no sharp corners.
5.       The bathroom thankfully had a latch on top from the inside, so that we didn’t have him walking in on mommy : many many hotel rooms these days do not have a latch on their bathrooms, I have no idea why, though) 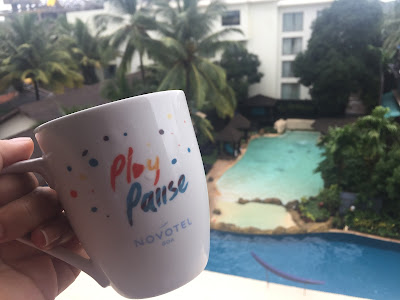 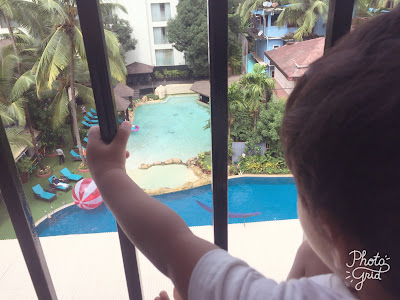 Our meal times were made special by the wait staff, which not only got us umpteen napkins, but also held Shreyu, took him for rounds, plied him with enough chocolate to result in sugar rushes, as well as drink water from a glass. Yup after all the drama , we forgot to carry the sippy cuo to the dining space ‘the square’. I had high expectations of him having complete balanced meals but he rediscovered his love for Marshmallows.  (Want to read my food tips for brunching with a baby foodie? Read HERE) 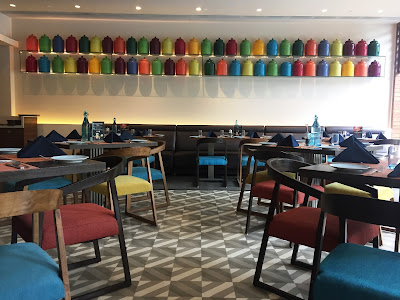 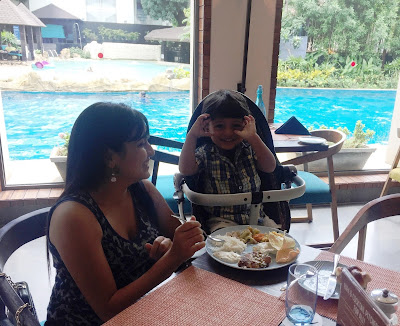 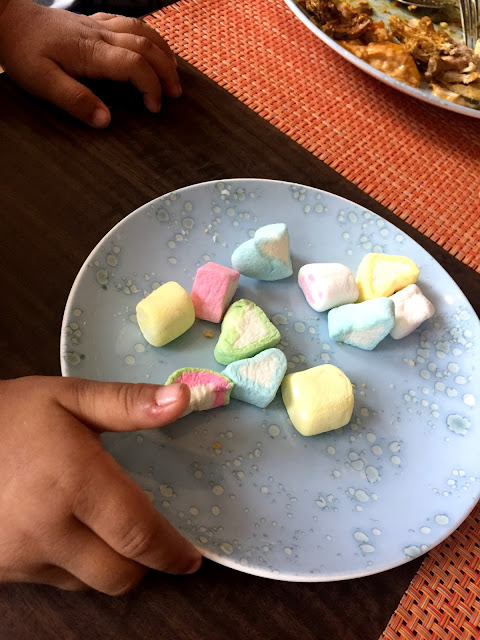 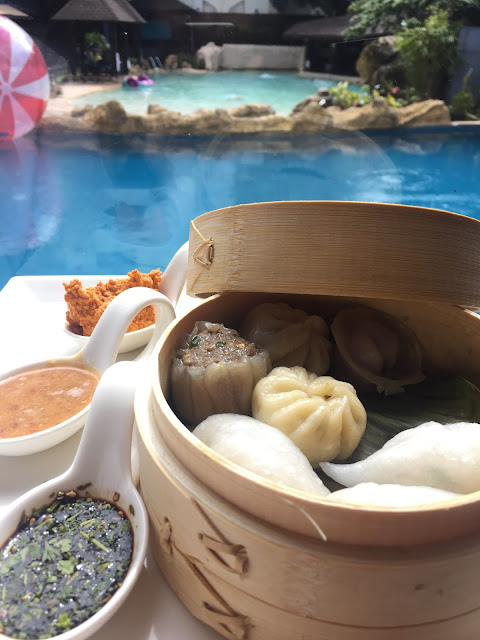 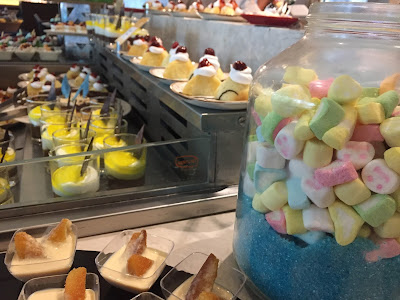 That evening we spent time at the Novotel Hotel play area, and Shreysht was happy to be left alone with the attending aunty, as he painted. I got pictures of him as he played inside and I waited outside like an over protective mom. Happy to see him occupied , and this for a child who has never been left around strangers and hasn’t even started to go to play school yet, was an exceptional relief.
In that time, I managed to go Zorbing, AND my husband managed to take pictures of me. None of it would have been possible if the little one decided to plunge in the pool. After my zorbing session, which was at an affordable 250 Rs , we settled into the kiddie pool at Novotel.

Now , while they have one of the longest adult pools in the state, their baby pool is really baby, I wish it was slightly bigger, because it can get crowded if more kids are there. thankfully we were the only ones. The pool has a gravelly texture, akin to walking on sand. It added to the grip and prevented slips and falls. I liked the idea, infact loved the pictures that the sand pool allows, a gradation of blue, almost like the sea itself. But, one of the moms complained that her child slipped and scraped her knee because of the rough texture of the pool. I guess it could have happen at the beach as well… 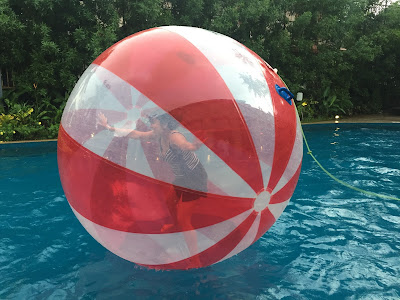 Dinner was at the fancy vero cibo, Mediterranean restaurant at Novotel Resort, and we rode there in the shuttle. It was also a rare occasion when I wore heels, and as a mom, if you are reading this, you can understand the euphoria. The dimly lit restaurant and the gorgeous interiors were a touch of fancy, and we loved it. They serve a set menu of salad, small plates, and big plates, followed by desserts. We had the watermelon salad, the sea food fritters, the mushroom fritters, and for main course a sea food paella, and pork spare ribs in BBQ sauce. For dessert there was Chocolate mousse sevred under a tempered chocolate dome, and tiramisu. 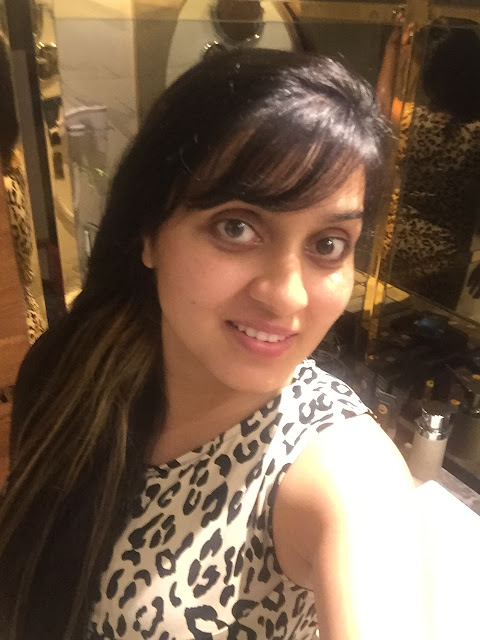 Breakfast next morning was equally indulgent with , wait for it, donut making stations! Yes, add custard or chocolate and nuts and sprinkles, and if you want, chocolate chips and marshmallows as well! The place was like willy wonkas, because kids were going absolute bonkers with towers of whipped cream and puddles of chocolate sauce. I wish I could have taken pictures of all the kids at the restaurant, but I didn’t want to infringe on their privacy.

Shreyu had his first bite of Donuts as well, and after mulling over the taste, decided it was just like Jalebi. He continued to pronounce donuts as jalebis. He also enjoyed his very own Dosa, which he likes to call big chips as well as fluffy idlis. I on the other hand indulged in noodles for breakfast. I absolutely love south east Asian cuisine, and the square at Novotel served it to my hearts desire. Not only did I have noodles for breakfast, but Laksa for lunch, and dimsums as well. they have a khousuey station for lunch as well. It was the ultimate indulgence. 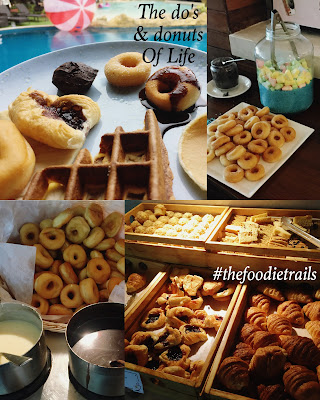 Chef sidharth whipped up a fantastic savoury, chicken waffles , and they were fabulous. Chicken stuffed inside the waffle, along with bell peppers and tomatoes, what an ingenious protein rich twist to what I always have with carbs and calories. (chef Siddharth and we have met before at the brunch at Labrise read about it HERE)

We spent the rest of the morning cycling, playing at the larger play area at the Novotel resort , and playing interactive games on a touch pad. 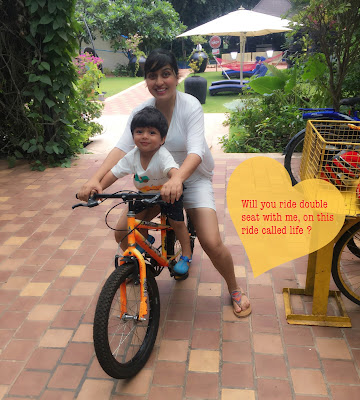 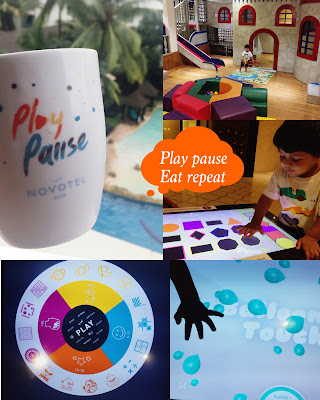 The touch interactive electronic interface was very fascinating. Kids these days love their ipads and tablets and phones, so what better way to interact with them in the same format. The games on the console are for 2-6 , 6-12, 12-16 and above 16 year old. We chose 2-6 and there were match the shapes and bump the balloons as well as colouring pages. All the games can be played by more than one player, thus the entire family can join in! it was a fab experience, very innovative.

Novotel has a cool theme of , play and pause, meaning there are ample activities to play ‘like cycles, and water sports, and carnival games…’ and bring a relaxing pause to life ‘ spa, lounging by the swimmimng pool, lazing in the room, or sitting on the balcony, walk on the beach..’ to say we played more and paused less would be accurate.

As a working mom, being able to spend happy times, and create happy memories as a family , is important to me. Getting away from every day strife of making beds, doing dishes or even planning meals for the family is an indulgence that has become a necessity to recharge. 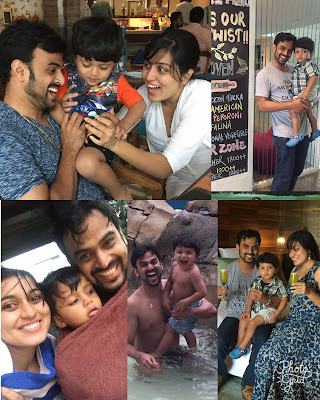 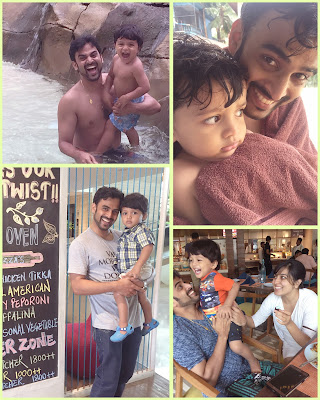 I hope this post inspires you to travel with your children, and if you already travel, find a kindred soul in me. Do share your favourite activities with your children when on holiday and if you want to read more about our travels as a family you can read 24 hours in Morjim,

This month happens to be my birthday month , and I have pledged to build my business, body and blog. My own private practice as an ophthalmic surgeon, to lose weight and regain my pre natal fitness level, and to reduce my Alexa number on my blog. my current Alexa as of today is 13132373. and I am taking part in the blogchatter campaign called #myfriendalexa.

We were hosted by Novotel Goa, but dont take my word for it other bloggers have written about the facilities aswell, read them The Wanderer travel tales from India
at August 31, 2017