With Durga pujo round the corner, and my 2 year old toddler all ready to embrace the Bengali half of his genes, it made me reminisce about my own Durga Pujos. One word I heard often but never truly understood was ‘probashi’ , it means a Bengali not residing in Bengal, much like an NRI which translates to non resident Indian. And while growing up I never aligned myself towards the word ‘non resident’ because I believed that all of India was mine to celebrate and reside in , the need of the hour is to not only accept our different cultures but to embrace it. With more Indians living abroad, and yet trying to bring in Indian festivities in their own way, feel free to use this blog as a template for your own learnings, as you celebrate your festival outside of a region that originally celebrated it.
While I have been mulling over what Durga Pujo will mean for my son, a half Bengali, who will be residing in a non Bengali environment, I wondered if it was possible to write a parenting blog post on the festival of Durga Pujo ? well, challenge accepted! 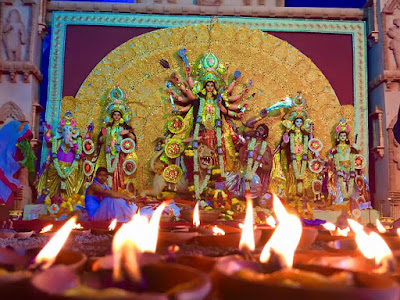 1.       Masterclass in Bengali culture: Read culture as in ‘Kaalchaar’ , but Pujo was one time when the 5 days starting from shoshti to dashami were steeped in Bengaliness. It infact started even earlier, with the enacting of the Mahisasura Mardani , enacted by the local drama team on Mahalaya. I remember watching it with rapt attention in Air Force Station Halwara, in Punjab heartland, and hoping that someday I would get to play Ma Durga in all her conquering glory. 5 days of listening to Bengali being spoken by various families, Bengali songs at home(we even played Bengali cassettes in the car while travelling from one pandal to another,pandal hopping), Bengali popular movies being sold as CD’s and cassettes at the Pujo stalls, and Bengali dances and natok (drama) on stage at the various cultural shows at the pandals.

2.       Learning my ABC’s from the Bengali hoardings: As a probashi Bengali kid, from an army background, I never did get around to learning to write Bengali. Caught up with learning to write Punjabi while in Punjab, and Marathi while in Maharashtra, I refused to add another language to the curriculum. The other languages were being tested in school, and I needed to learn them for my marksheet, where will I need to read Bengali? Was my argument, and it does make sense. If you are a Bengali residing in US , I think learning Spanish would be more beneficial than learning to read Bengali. But it was only during Pujo that I would painstakingly read out “sharodiyo shubechcha” to my proud dad (beeming ear to ear), and then continue to read “Jamdani sari for sale” and “ chicken roll” from the other hoardings. Roll infact was my favourite word, once you know that one, the rest of the menu was simple, “egg roll” “mutton roll” … for someone who till pujo rolled around , knew only to read “Howrah” during the annual summer holidays at Kolkata, being able to read more Bengali was a matter of pride , but I would conveniently forget the words by next pujo, and would have to start all over again.

3.       Learning to appreciate the handlooms of India: Pujo meant new clothes. That and the spending pocket money we got every day of pujo, will always be the TOP most memories of Pujo. The spending money went from Rs 10 to the princely sum of Rs 500 last year, and yes we still get spending money from my mom till date. But what hasn’t changed is the new clothes, and the showcasing of the most varied Indian attires. Mens in kurtas with elaborate kantha stitch work done, or with Jamini Roy paintings . Women in jamdani, baluchori ,and silks from all over India-Banarasi, Sambalpuri, Muga, the list went on. As a child I may not have known the names, but the love for indian ethnic wear left an indelible impression on my young mind.

4.       My first taste of politics : The forming of commitees, the selection of committee president , and member privileges, the ego battles, the taking of sides, and the ultimate fractioning of the factions, a Pujo committee made for rife breeding ground for local politics. It was often said “if there are 5 bengalis, there will be two pujo commitees.” As children, we used to envy the kids who got to sit on the front row of all the cultural programmes, and got the plum roles in the dance dramas, because their parents were in the “pujo committee”, big or small cities, no one is free of such subtle privileges. Last year when I went to the local pujo in Panjim, Goa, we were denied Pujo bhog, because we were not members of the local pujo, until one of the juniors from the medical college recognised us and smuggled us into the ‘members only line’ .

5.       Over all extracurricular development: The five days of pujo were packed with fun contests and competitons for all ages, for us children there were fancy dress competitions , drawing competitons, singing , dancing and also quiz contests. While my brother excelled at the quizzes, I was interested in the painting competitions. The paintings done by the participants would then be pinned on to the makeshift fabric or tarpoline walls of the pujo pandal, for everyone to admire. I loved to see my art on display, and till date, always enjoy seeing the art of other children proudly displayed at the pandals. A lot of Bengali children grow up with artistic leanings, even those not born and brought up in West Bengal, maybe Probashi pujos have something to do with that.

6.       Importance of community: Bringing forth a sarvajanik durga pujo in a non Bengal environment is not easy, especially since Durga pujo is hardly ever a family affair, outside of Bengal. It is always a community celebration, unlike other pujas like Lakshmi puja, or Ganesh chaturthi, where individual families celebrate within the four walls of their home. Durga Pujo necessitates the forming of community groups, there are those who will handle the bhog, others who will manage the collection of funds, procuring of things like a Kola gaach “banana plant” as a bride for Lord Ganesh (kola bou). Durga pujo is not celebrated within the four walls of one home, it is celebrated in a community, with the entire organising committee working as a family.

7.       Celebrating your differences: I have this as my last point because honestly I had the hardest time learning this lesson. As an army kid, I loved to celebrate Lohri in Punjab, or Ganesh Chaturthi in Pune, Pongal in Tamil Nadu, or even Christmas in Goa, but when it came to Durga Pujo, I didn’t involve my nonbengali friends. Growing up I didn’t have any Bengali friends in school, much to the chagrin of my grand parents . I have lived in 8 different cities in India, and not one of them has been in the state of west Bengal, and I felt ‘categorised’ when people identified me by my surname. And that was one of the reasons I didn’t have Bengali friends while growing up . (I am guessing it’s the same reason NRI kids refuse to be labelled the Indian in the NRI ) .

But why did I not take my non Bengali friends to pujo pandals? It was the fear of being judged. We ate non veg during durga Pujo, when most of the country fasted, or at the very least ate vegetarian. Do you have dandiya , do you have garba nights?they asked. No , we didn’t and it made me feel that we were not as cool as the other navratri celebrations. But with age I have a better understanding. Now I try and make others understand our celebrations, and also I accept my own lineage. And thus, five years back my first blog post on Pujo was explaining WHY WE CONTINUE TO HAVE NON VEG DURING DURGA PUJO, and celebrated our chicken rolls, and mughlai parathas and prawn malaikari. A few years later I celebrated the absence of dandiya but the presence on Dhunuchi naach, dance dramas and BENGALI CULTURE OF PANDAL HOPPING through another post.

Ironically , while I was ok celebrating all other festivals of India, I kept Durga pujo guarded from the inquisitive and often judgemental eyes of others. I felt defensive , and it made me non inclusive. But all of that changes now. Now that I have a son, who will also grow up in a probashi environment, and with many more Bengalis moving out of Bengal for work, we will have many more probashi Bengalis, I want to invite everyone to have a chance to celebrate Durga Pujo, through an innovative online experience which we call #bloggersDurgaPujo , with four bloggers from four different cities in India.


Durga Pujo is celebrated with immense joy and enthusiasm by Bengalis all over the world. Join Four bloggers from four different parts of the country as they bring to you a kaleidoscope of festive fervour in the form of blog posts and videos for an entire week . We hope to entertain, inform and enthrall you in a quest to involve everyone in our moment of joy. I am happy to be one of the cocreators for this creative team called #bloggersdurgapujo

head over to Paromita's blog tomorrow (Monday 25 september) for her post on Durga Pujo,then to Rahul's blog on 26 September ,Tuesday, and Shamik's Blog on 27 september wednesday... a week of Pujo related blogs on our #bloggersdurgapujo !

I am taking my alexa raanking to the next level with my friend Alexa
also submitting this to #mondaymommymoments , theme for this week was teaching our kids about our festivals
at September 23, 2017