The anatomy of a Goan House

There is something very regal and yet whimsical about a Goan home, very European in its look and yet very Indian with the use of Mangalorean tiles on it’s sloping roofs. It is one of the most startling features in a Goan Landscape, especially for someone who hasn’t grown up seeing Goan homes. Right at the outset is my disclaimer that I write this article not because I have indepth knowledge of the ancient histories and workings of a Goan home, but because of an inherent fascination for them. 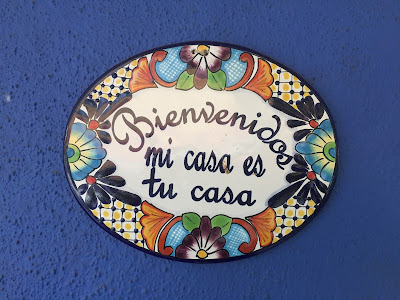 The signboards: even before entering a Goan home, a beautiful signboard consisting of a few tiles put together, and painted in the traditional blue states the name of the house. It could simply read “Menezes” or be a more elaborate “casa de Menezes” or home of the menezes, or could even have a quote or an elaborate saying, like “Me casa su casa”. These signboards are called Azulejos, which are traditional Portuguese tin –glazed tile paintings. They are not restricted to signboards or homes, and tile paintings can be elaborate enough to decorate entire walls or facades, can be present within a building or on the exterior, and can depict elaborate historical events and the art can be dated according to the centuries it belonged to dating back to the 13th century.

The windows: The windows of some of the Goan homes have a distinctive glass pattern, with small square shaped pieces of glass slotted within the frame.in the early 18 century, the homes used the local mother of pearl from locally sourced oysters, which were …. And fitted into the window frames. The light filtering through these translucent mother of pearl windows, cast an ethereal glow within the homes. With time these fragile pearl shell window panes became difficult to source and the expertise to cut and fit them also became a rarity, leading to people turning to glass window panes.

The balcao: Not to be confused with the balchao the red hot spicy and tangy pickle like curry, a balcao is in fact a open air seating, where the members of the family gathered to sit out an enjoy a cool evening breeze and see the village folk pass by, or even gossip with each other. These balcaos are present just outside the main gate, and staircases lead up to the balcao. The higher the plinth, the more the number of stairs leading up to the entrance of the house, signified the social standing as well as the wealth of the owners of the house. 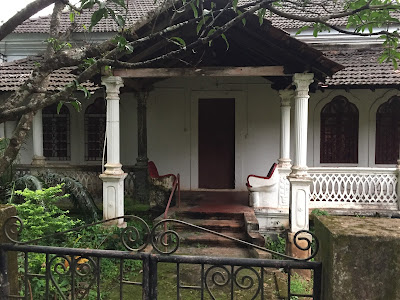 Verandas and railings: The verandas are interesting parts of the Goan homes anatomy. They are generally narrower than the average balcony, they sometimes run the entire length of the floor, or might be restricted to individual rooms. These balconies were signs of affluence amongst the nouveau riche in the 18 and 19 century. The railings too were elaborate and decorative, first made in laterite, then wrought iron and in wood. Each home in the neighbourhood tried to out do the other one 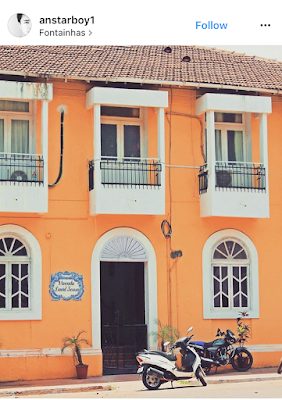 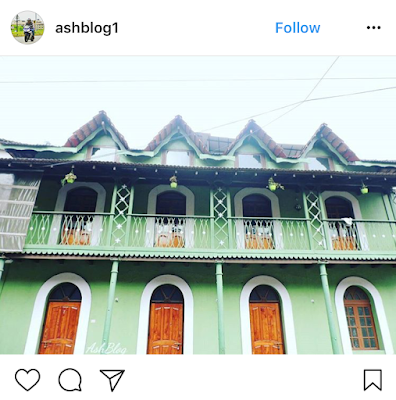 The painted walls: No Goan landscape is complete without the colourful homes. It is said that the Portuguese prohibited any home from being white, and only the churches and places of worship were allowed to shine in pristine white. This led people to use natural organic colours such as red of the earth, yellow from saffron, and blue from Indigo, while the green was a mix of the blue and the yellow. Over the years it has become a beautiful way to showcase their home rather than out of any religious compulsion, so much so, that even Hindu homes have started to paint their homes in vivid colours. 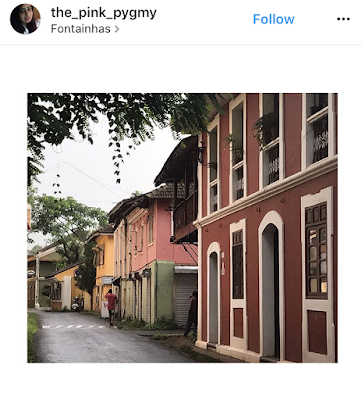 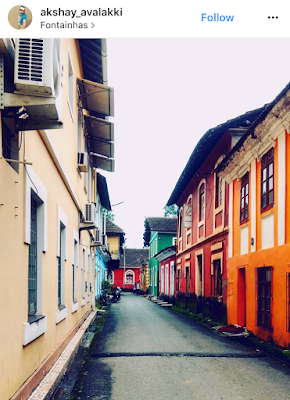 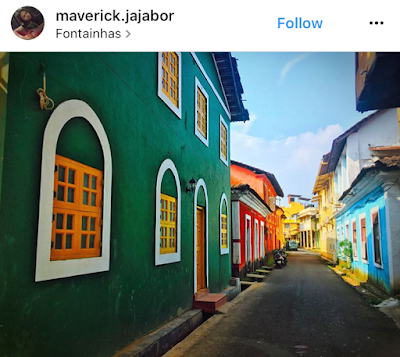 The courtyard: The courtyard is the heart of the Hindu home. While the catholic Portuguese were interested in showcasing their new found wealth and social standing by external beautification of their homes, the hindu preferred in internalising their faith, maybe in a way to safeguard it against outsiders. The courtyard generally was without a roof, and allowed the wind, air, and sunshine to circulate within the home. In contrast to the balcaos of Portuguese homes which encouraged interaction with the outside world, the courtyards were intimate gathering places for the members withing the home away from prying eyes. The courtyard is also home to the Tulsi vrindavan. Now most Hindu homes venerate the tulsi plant, but in Goa they held on to the holy basil, as a symbol of their faith, and thus the pot within which it was held became more decorative and ostentatious, even as the catholic Portuguese homes grew more elaborate.

The mangalorean tiles: This might have been the only true blue Indian entity which stood the test of time even during the Portuguese rule and thereafter, the sloping roofs with the mangalorean tiles. The torrential monsoons were no match for these burnt kiln roofs, which even till date grace many a home in the villages and cities of Goa.

Marcou artifacts and Mario Miranda paintings : A vibrant yellow ceramic cock, or a porcelain vase depicting a village scene in Goa, may not mean much to the untrained eye, but these are quintessential items in a Goan home, especially those who have settled in foreign shores but hope to carry a bit of Goa with them. Little salt and pepper shakers, which depict shigmotsav and the carnival in typical Mario Miranda sketches, are not just fantastic gifting ideas, but they also bring Goa within the home. the religious diversity, the colourful village folk, the fisherwoman, the ‘hiccing’ drunk at the village pub, all encompass the olde goan life, immortalised on fridge magnets, ceramic plates, ornamental tiles by Mario Miranda’s work, these now help make any home a Goan home even if you can’t afford the lavishness of the 18th century Casa de sobrada (double storied mansion) and can barely afford the rent on your two bedroom-hall-kitchen.

In my search to know more about the homes of Goa I found myself in a museum which is dedicated solely to the houses of Goa, in Porvorim. Designed like an inverted triangle, this building is like no other house in Goa and yet is an ode to the architects of yesteryears.


The entrance of the museum has these lines by the architect Gerard de Cunha:

“Walk down a village lane and you’ll see that these houses are like elegant and dignified men and women chatting at a formal reception. The atmosphere is cordial and thoughthe dress code is specified each invitee is nattily dressed, colourful personalities with great individual confidence and swagger!and just as each party guestis unique and varied , the variety in the details of the elementsin these Goan houses is astonishing.”

This article has been previously published in Planet Goa Magazine.

this blog is also part of my 'Being Goanese' collection,