The Diwali in Goa no one is talking about

Imagine celebrating Dussehra during Diwali, and you get Narak chaturdashi. Now, having lived most of my life in North India, with a leniage from West Bengal, and hailing from Maharashtra, I had never seen the likes of a celebration quite like the Naraka chaturdashi in Goa. Legend has it, and again I say, I am not pro- religion but I love traditions and cultures, if we can only separate the lore from creating hate and promote brotherhood, we would succeed.

I first wrote about Narkasur , as ONE OF THE BEST TIMES TO VISIT GOA, and you can read it HERE.

So then , Narakasur was a powerful demon, who was the son of Bhumidevi or Mother Earth, he had asked for a boon that no one but his mother could kill him and that meant that he was immune to all the gods of Heaven and warriors of the earth. As Narakasur got more and more arrogant and ruthless, he pulled the earrings right off the Goddess mother Aditi’s ears! The bleeding and hapless Goddess Aditi, came to Satyabhama , Lord Krishna’s third wife for help, and together Krishna and Satyaabhama attack Narakasur. Narakasur manages to hit Lord Krishna, and Lord Krishna feigns his injury, seeing that Krishna is injured his wife Satyabhama releases a volley of weapons on Narakasur and he actually succumbs. How? Well, Krishna as all of us who have grown up on tales of Mahabharata know is well versed in war politics and subtle subterfuge. He explains that Satyabhama is actually an avatar /form of Bhumidevi/mother earth aka mother of Narakasur.

Legend /lore what ever you may call it, it is a tale of a mothers love, a sons arrogance, and the love of a wife for her husband. 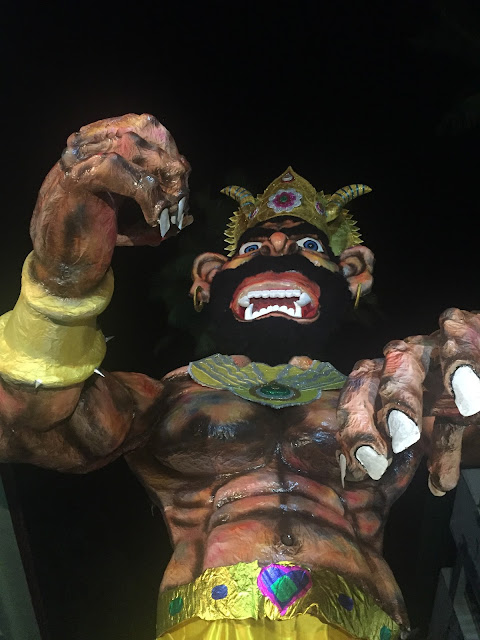 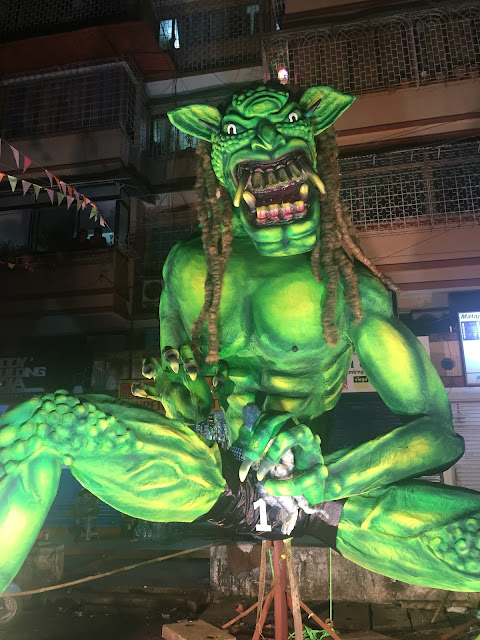 On the night prior to Narak Chaturdashi , the streets of Goa transform into a land of the biggest, brashest and bad boy Narakasurs, They are as tall as three to four storied buidlings, some sport claw hands, others have a snakes tongue, others have eight eyes, and it all depends on the creators imagination, and since most of them are created by youth groups in the state, the imaginations run pretty wild.
But this post is not about the crowd funded Narkasurs, but the home made narkasurs which kids at home plan and prepare weeks in advance.
When I first came to Goa, I was amused by the small to tiny narkasurs being carried by kids of all ages, held in arms, or proudly strung in front of scooters, or hanging out of car windows, these are demons created at home by the kids.

Now I am no big on religion, but how cute is making your own little demon and then destroying evil in the simplified manner overnight. I wish we could destroy all demons with such ease , but that is the power only a child’s imagination holds.
And so I decided that Shreysht, my son will grow up with a solid foundation of Narkasur making .

His first narkasur was a paper plate Narkasur, with a wooden spatula to hold him up. I returned at 8 in the evening, from work. it was way past my 3 month old’s bed time, but I quickly rustled up a narkasur , and got a picture for posterity.
That was also a year we started our annual pre Narkasur burning bash at home, also I didn’t go Narkasur hopping, since we didn’t have a nanny, and I baby sat a sleeping baby. 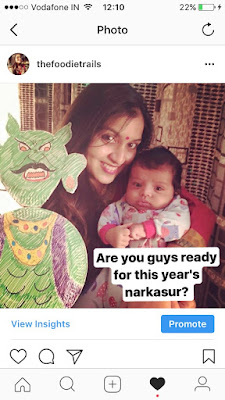 Next year, I went bold, with a black Narkasur, with silver nail paint, 6 pack abs, some very funky jewellery. And again it was a 2 D chart paper narkasur. At 14 months, we decided to miss the Narkasur hopping for Shreysht . 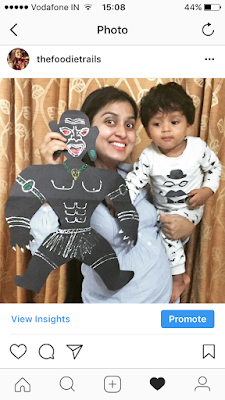 But this year was different, we not only had a three D Narkasur. I fashioned it in the shape of the Blue whale game, which was an evil game preying on young impressionable minds , driving them to harm themselves also even making them commit suicide.Now that is a kind of evil no mother can tolerate, and I am sure that the mother of the creator of the game would not stand to see such evil either. It made sense then that it be a mothers call to kill Narkasur blue whale.

This year we took shreysht to the market to buy the Narkasur head, he even did a quick recap of all body parts, with ‘big tummy’, big teeth’ and big eyes’ of Narkasur.
He was amused at my making of narkasur, and held up the AC remote as a phone for narkasur. We also went Narkasur hopping for the first time with him , and he loved the larger than life displays of evil. 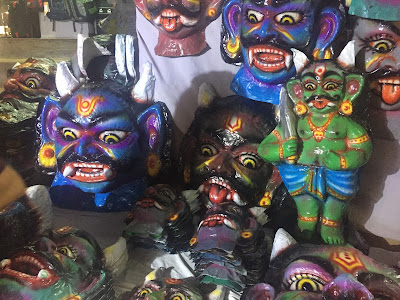 That night I left mini Narkasur along with other mini Narkasurs, and there was a twinge of sadness that we had him only for 24 hours. But if in the true sense of the mythology, evil is created within and by us , and only we can destroy it,as well.

If only we could banish all man made evil like pollution, corruption, and women tormentors with the ease that we burn down narkasur each year.


And while kids all over the country make cute diyas, and lanterns and rangolis for Diwali, I hope Shreysht and I continue our tradition of making bigger and badder demons to destroy in years to come.
Come join us some year for this spectacle.

While popular media can't get over the fun of Halloween, I had visited USA when I was 15 years old for Halloween, and when I was asked what I thought of it, I had answered that it reminded me of Diwali. My American hosts were amused, but I explained, “ for Diwali we visit other people’s homes, we also dress up, but in new clothes, we also get lots of sweets and food just like Halloween treats, and for tricks, we have fire works and fun games.” The only thing missing were the spook factor, and I think Narkasur adds that to our Diwali celebrations in Goa.

With every year our Narakasur gets bigger and brighter. for year 4 : edit . We had an Octopus Narakasur with 8 tentacles, representing the Me too perpetrators. #metoo is a movement against men who use their position of power to gain sexual favours from women. It gained a lot of media support this year in India 2018. and just like last years Blue Whale game it represents all that is evil in our society .

Goa is no stranger to Interesting Festivals and I have written about many of them , do have a read if you want another view of Goa.

Email ThisBlogThis!Share to TwitterShare to FacebookShare to Pinterest
Labels: Being Goanese