Serendipity art festival 2017- India and the pursuit of arts

Serendipity Art festival 2017 was held from the 15 th to the 22 of Dececember in Goa’s Capital city Panjim. This is only the second edition of the festival, with last year being a brilliant showcasing of different arts , again all of it absolutely free of cost for all the patrons.
I attended the festival last year and I loved it (read about it HERE) , but this year I was so caught up at work, juggling my patients, my OPD clinics, taking the little one to school, planning the festive season , and also fighting off a migraine that I almost gave Serendipity a miss.


Which got me thinking to ‘how important is ART to us as average hard working middle class Indians?’ now, while I dabble in travel blogging, I can hardly afford to ‘ quit my dream job and take up travel as a life goal.’ The same goes for attending Art shows and art exhibitions.
Some where in April this year the Snapchat CEO allegedly said something about India being too poor to be a market for the rabbit ears photo filter app. And while I agree to an extent that India has more pressing problems than to create rabbit ears for our selfies,  Can India afford to neglect the pursuit of ART?

Serendipity art festival celebrated 7 facets of art , from the culinary to crafty, photography to music, dance and theatre, and all of this experiential art was available for free for anyone who chose to spend not their money , but their time at the venues.
But time is of premium. Especially for a working mom like me.

And so this blog is to filter what I gained from the sernedipty experience, so that You can decided for your self if it’s worth your time and effort. 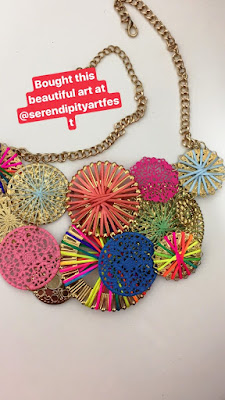 Papier mache skulls, with the typical Kashmiri drawing of chinar leaves. A wall adjacent to it had urdu poetry about Kashmirs struggles. Headphones allowed you to hear the sonorous voices of the Ghazals as you gazed on to instagram worthy skulls. 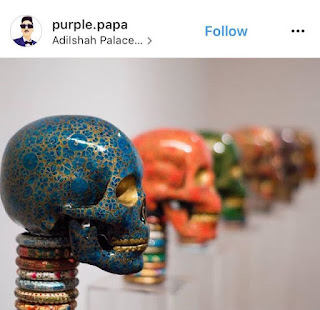 A dynamic white wall with red installation, a red letter box, : the state with no letter box, again so snapchat worthy, and representing Kashmir. 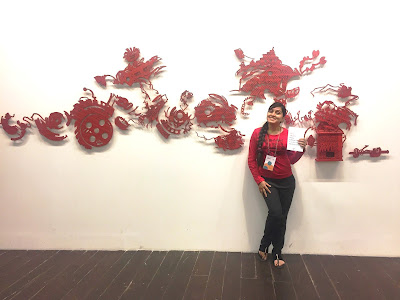 An entire room filled with gorgeous graphiti, and bold black and white images. The words traversing across walls, squiggling up and down, and making you travel along the walls, much like the Delta of the sundarban region that it is about. The walls talk about the tiger widows, and how every week men are dying at the hands of the tigers, whose land is usurped by people, and these people in turn turn to fishing, and these fishes are inturn stolen by others ( pirates) and the boats are stolen as well, and the cycle begins again, of death, poverty, dire circumstances, until people stop dreaming all together. 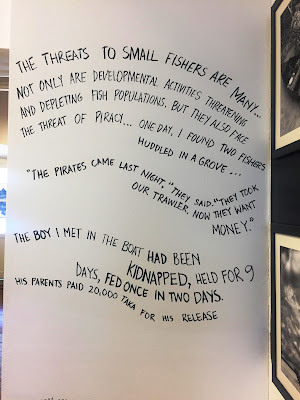 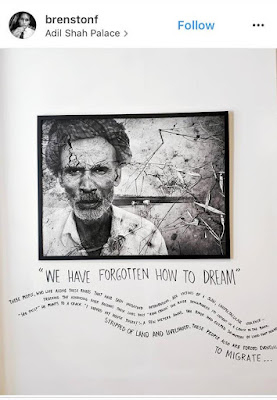 A food theatre where we ate courses such as Bengali jhaal muri, Bihari Litti chockha, Manipuri momoms, and benarasi paan among others. The actors shared a street vendors story, like how the Litti chokha seller has to pay off the policeman and the local goon, and pay for school and tuition and home u keep, so when you ask him if he can sell it for less he growls ,” do liiti, or chokha pachaas 50 rs , it wont be for less, and it wont be less spicy, and don’t you dare eye my daughter , you scoundrel!” , the Tamilian mango seller is married to her mama, in typical custom of consanguinity so prevalent in that part of the country, and she says it is “louv” love. A nuanced look at what the street vendors life looks like. 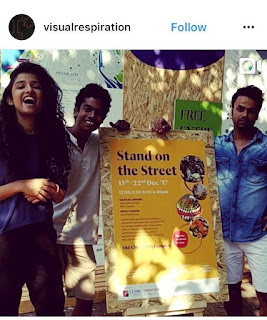 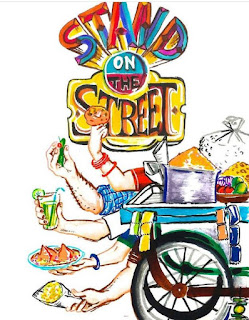 An Australian masterchef shares her experience of India, and how she found her home in Goa which reminded her of her home near the Great barrier reef, and the beaches and sand called to her. She was inspired to cook the Goan crab xacuti with her own twists of fish paste , and honey among other things .

Dream catchers trying to catch the rays of the sun, and wool made out of recyclable bits of plastic being woven into yarn. A drum circle with people joining in from all walks of life. A rare museum of all our childhood things like a dial up phone, and toasters and old school computers, all now part of obsolute but pretty artwork.

A photo exhibition of Geeta Bali and the romance of yesteryears. 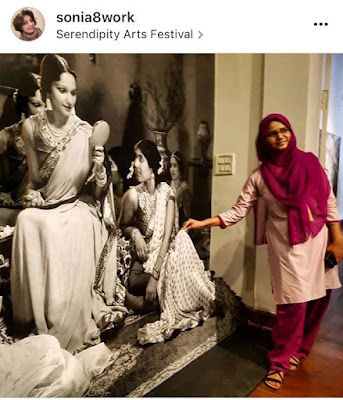 What did the art at Serendipity teach me? That art can be found anywhere, be it painted on the side of walls in the city, or perched on the rooftops, or hanging from trees in a children’s park, art is everywhere, and it has the power to bring about change. Just like the singers, poets, musicians , cinema artists of yesteryears who brought about revolutions through their art. Art can lead to something tangible through the ephemeral and ethereal. While you walked the corridors of Adil Shah palace, you realised that the Mapusa Market is a place of wondrous findings and needs to be preserved, or that the Pano Bhaju outfit of the Fado singers in Goa is essentially fashion fusion of many cultures traversed by the spice traders, or that there is something called the tiger widows and these people have faces and homes and most importantly dreams. 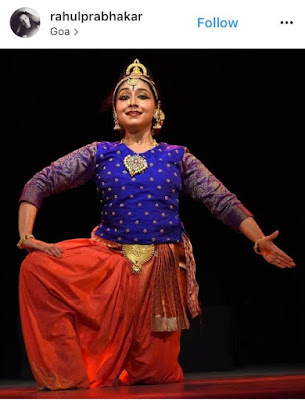 Can India afford to spend time in the arts , while people die in famines?
I attended a stand up comedy show by Kenny Sebastian where he said ,” we live in a bubble, there are people in the country who are waiting for the rains , farmers who are dying because of the delay in rains, and we are grunmbling ‘yaar ye comedy show kab chalu hoga / when will the show start ?’ “

That is the dichotomy of India, and shows like Serendipity help bridge that gap, the sorrows and strife of the street food vendors, and the tribals of sunderbans and so many others were identified and these stories shared in heartachingly beautiful artistic mediums.


Because while Indians are forgetting the arts, the arts are not forgetting India and it’s Indians.

As a food and travel blogger, I decided to celebrate the city I live in from a travellers perspective this year and here are a few more blogs about the Goan state of mind. 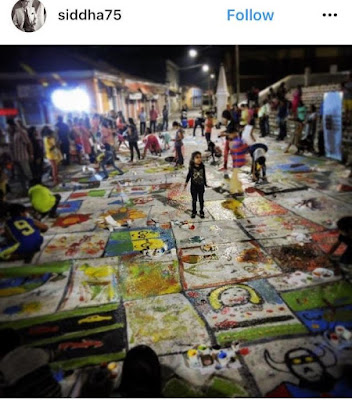 read about the International film festival, and how you can make the best of your time at the IFFI HERE
wanted to eat a typical fish thali in Goa and what to know more ? read HERE
Been inquisitive about the double decker buses which have been started lately by the tourism deprtment ? read about the Hop on Hop off bus services HERE
Ever wondered why the Goan houses are so colourful on the outside? it's because the church wanted everyone to colour their homes so that the church stood out in all it's pristine whiteness, read more about the secrets of Goan homes HERE

Email ThisBlogThis!Share to TwitterShare to FacebookShare to Pinterest
Labels: Being Goanese, goa, goanseasonsgreetings