Started by Kate Abramovitz, who is a designer by profession and has had her boutique store in the same place for 3 seasons now. And when I mean seasons, I mean the Goan tourist season, which begins in November and goes  on to March. Women travellers were instantly drawn to the place ( Just like me) , but the men needed more convincing, and so she decided to add a café, where the men and children could enjoy , while the lady spent unhindered time in the boutique store. Her friend L J curated the Mediterranean themed tapas menu, and thus Jaali boutique and Café was born.


Jaali has the perfect Goa vibe for me. Now what would the Goan vibe be for someone who lives in Goa, you ask ? for most of the tourists I see them clicking pictures of cows and buffalos on the beach, and I wonder why, but then I realise maybe that is their idea of a ‘Goa vibe’ the ethos of a place. For me it is discovering my state in the little bylanes, where there are more non Goans than Goans, discover a pretty boutique shop with exotic and pretty curios , meet people from around the world who love India and cant get enough of India, and I fall in love with my land when I see it through their travellers eyes. 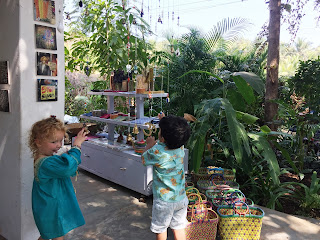 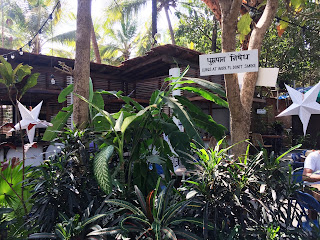 That is exactly what Jaali is, a rediscovery of the aesthetics of India. The place is filled with a trellis of netted pattern representing the Jaali work found in Rajasthani palaces, as well as Mughal Architecture. As an architectural pattern the Jaali was the ingenious idea of air conditioning in the hot dessert regions of Rajasthan. Following Bernoulli’s principle, when air passes through a large area and flows through a narrow aperture, the temperature of the air is lowered. So when the hot arid winds blew through the Jaali windows, they provided a cooler waft of air for the residents within.

The restaurant Jaali with it’s uniquely Indian use of Indigo patterns, and verdant green garden style surroundings is a similar breath of fresh air.
Oder then a selection of fruit spritzers made from fresh fruits and sparkling water; we tried the watermelon mint spritzer, the pomegranate and the lemon spritzers. Each refreshing and yet unsweetened by artificial sweetners, delicious.

We ordered the Carni platter which had meatballs, chicken liver pate, chicken roasted with middle eastern spice rubs, and the famed chilli jam made inhouse as well as sold in the boutique store.  What was exceptional though was a cauliflower tapas, also part of the mezze carni platter. A cauliflower roasted and then mixed with a tahini based sauce felt just out of one of Yotam Ottolenghi’s cook books. Yes, that good. 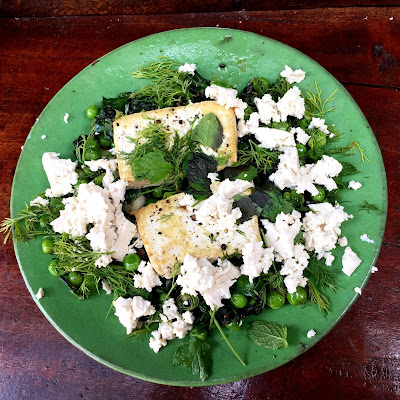 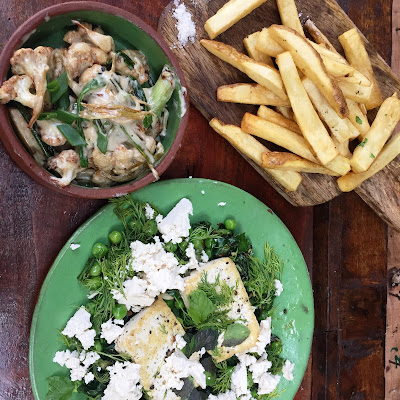 What I Love about the carni board is the little details like the multi grain crisps which are used to scoop on some pate and chilli jam, or the use of Goan poi bread as a flat bread naan variant. Also the healthy mix of salad greens and veggies.
We tried the hummus and the fish in salsa verde too, both kid friendly dishes which my two and a half year old enjoyed.

The desserts stole the show though, I cannot rave enough about the gluten free chocolate and orange cake, made with almond meal, it was high in protein and who am I kidding , the tastiest dessert I have had in weeks. It was so good, I had to pack one for later, because this thing needs to be shared with everyone, and I wanted the folks back home to try it. And the churros with chocolate sauce and cream, a crowd pleaser everytime, anytime. 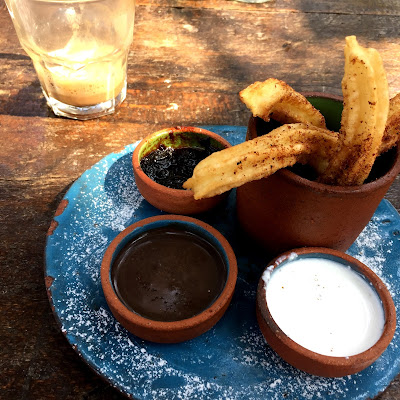 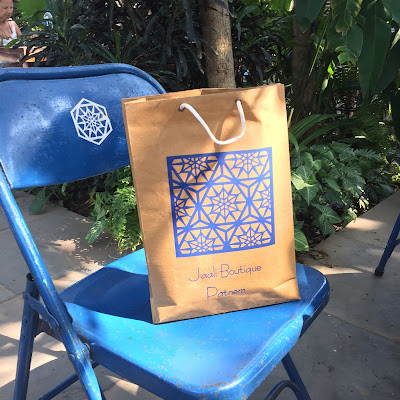 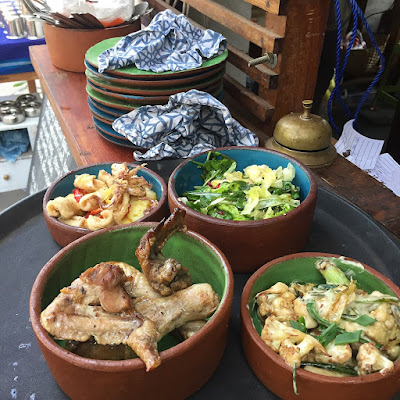 We also experienced the sleepy Goan village life in the Jaali cottage in Patnem village, and it was cute and cozy . with so much natural light streaming in and gardens filled with Bouganvilleas and a backyard with a lovely sit out to enjoy the evening cuppa, the cottage had lovely nooks to just read, or even write if you wished, with writing desks overlooking the garden space. The place even though simple has been thoughtfully and aesthetically designed. A salve to the city bred soul.

It is not every day that one discovers treasures in your own back yard, and jaali is just that.


If you want to read why I love staycations read it HERE on the blog.
Interested to read Istanbul food trail also with similar flavours of the middle east ? read HERE