Goa on my plate : Diva restaurant by Chef Ritu Dalmia

When a famous celebrity chef opens her flagship restaurant in your tiny state, you as a foodie are excited at the prospect, and when Chef Ritu Dalmia opens her famous Diva line of Italian restaurants for the first time outside Delhi after famously stating once that she would never open a Diva restaurant outside of Delhi , you are positively thrilled.

Chef Ritu Dalmia’s reason for opening Diva in Goa is because she loves Goa, but as a foodie I think she made a very good choice. with a number of good Italian home style restaurants, regional cuisines of Italy being highlighted as well as Italian chefs in starred restaurants who bring their Nonna’s recipes with them , Goa has been exposed to world class Italian cuisine , and would receive Diva with open arms.

Diva restaurant is located in a new-ish resort in North Goa, called Andores resort, in Tivai Waddo Calangute. A verdant green property fringed with palms, the restaurant itself is by the swimming pool and the large glass windows allow natural light to stream in.

Chef Dalmia , who incidentally also has a restaurant in Milan called ‘Cittamani’ which serves Innovative Indian cuisine using Italian ingredients also has influences of Goa, and her Delhi restaurant Diva spiced has uses of Kokum and Coconut. While these may not be part of an Italian cooking , Chef has been known to incorporate fresh local ingredients true to the season in her menus, and that’s what I am most looking forward to.

The tasting menu in true Italian style, started with an antipasti,went on to the first course a primi, and a second course secondi and then desserts, also how can we forget pizzas!

For the Anti Pasti, we had a refreshing tartare of cubed beetroots and green apple with a zingy lime mustard dressing, as well as a more subtle prawn salad with graceful fennel shavings and orange segments. I think this course set Diva apart instantly. Each mini cube of beetroot and apple were painstakingly sliced and similar across all the plates, the flavour combinations as well as the precision knife work were both impeccable.

Then came the Pasta dishes. For the vegetarians there was a mozarella filled gnocchi, tossed in a simple marinare style sauce. I liked it, but thought the mozzarella filling converted the traditional bite sized gnocchi to more of a mouthful. I personally like my gnocchi smaller and more swimming in sauce . To read about my three favourite Pasta meals from my trip to Rome READ HERE.

But, the minced lamb Ravioli stole my heart! As a rule, whenever I visit an Italian restaurant, I order ravioli. Why? Because that’s when you know if they make their own in house pasta , at least in India. There is so much more complexity and technique required in making raviloli, like the stuffing, the pasta rolling itself and the sauce, and at Diva the spiced lamb with a onion and rosemary infused puree was sublime. I didn’t check the menu, but if they make tortellini’s then that’s what I will have next time, because those too really judge the depth of creativity and precision of a Italian restaurant.

The secondi, or what is considered the Maincourse was potato roulades with a grilled veggies, and beaten chicken breast with lime and peppercorn and baby roast potatoes. I wasn’t very impressed by the presentation, nor the flavours. To be fair, these were tasting portions and I wouldn’t judge plating on such small portions, a valiant effort with the painted stroke of beetroot sauce on the side. I agree it added drama, but my chicken was dry and I was scraping the beetroot sauce for some relief. My favourite parts were the grilled baby potatoes and the onion segments. It needed more of the dipping sauce or a jus.

Now for what you have been waiting for , the Pizza. We were served four classic combinations, the Margherita (Chef Dalmia’s favourite choice), Verde with pesto, pine nuts, fresh rocket leaves and moxarella ( my favourite and highly recommended), Sabine with salami red peppers and red onions ( the most photogenic and also for those who enjoy spicy pizza) and the Cotto with cooked ham, olives mozzarella and parmesan (this one was a meat lovers paradise, generous helping of ham on the pizza). 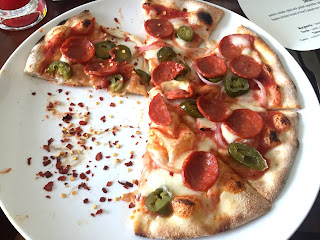 Yes, the pizza is decidedly good here, but don’t take my word for it, Diva was chosen among the 70 best restaurants with a pizzeria in the world, and the jury consisted of Italian embassies around the world and the restorazione Italiana Magazine.

And now for the desserts. I can hear you guys saying “Basta Basta !” I can’t take it anymore, but I promise this is the last for now.

One of the best chocolate torte, it was a miracle how something so crumbly and moist could hold its shape on the plate, because on the tongue it melted into a gooey mess of chocolatey flavours. The Tiramisu valiantly held its own against the scene stealer torte. Diminutive in a shot glass, it still managed to pack a punch with the amount of coffee that it had, it is deceptively benign looking but delivers on taste.

Apart from the food, I was also taken up by the eclectic artwork in the place, done by Aradhana Seth, with the use of black and white abstract images to depict pastas of various shapes, and using an old Italian magazine to create mosaic art along with dry pasta , as well as geometric patterns to depict herbs and spices. The creativity had clearly emanated from the kitchens to the walls.

Head to Diva restaurant now open in Goa, situated in Calangute, open all 7 days of the week, for lunch and dinner during the monsoon season of Goa ( which is now) and soon have more hours of service come next tourist season. It’s a bit tricky to find, but put Andores resort or Diva restaurant on google and you should be fine. Indoor seating with pretty surroundings are a bonus, parking is present in the resort itself.

Email ThisBlogThis!Share to TwitterShare to FacebookShare to Pinterest
Labels: Goa on my plate