If I had one meal left on this earth, biryani would definitely figure in the menu. The mix of meat and rice and spices makes for a very satisfying last meal. Biryani is such a perfect complete meal; carbs and proteins cooked together in harmony in an easy to eat single dish- perfection.

It wasn’t my last meal that I was planning, but since we had lived beyond the Mayans prediction of the end of the world, it was reason enough to celebrate. 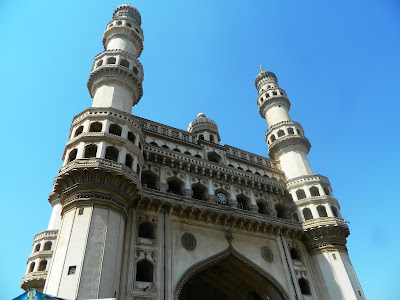 The historic city of Hyderabad, which many believe to be romantically named after the fourth Qutb Shahi king Quli’s wife, is steeped in culture. The statuesque minarets of charminar, the vast ruins of Golkonda, and the quietly sparkling chandeliers of Chowmahalla palace speak of a time gone by. A time of kings and queens, of shahi banquets, a time of opulence and indulgence.
I was so excited to be visiting Hyderabad, that I began indulging in the delicacies even before I reached Hyderabad, by reading food blogs on Hyderabad.an intersting food blog The moment we arrived in Hyderabad, the feast began.We hit the nearest place to have biryani; which was not difficult since every place which served food, served ’authentic hyderabadi biryani’ too.

Having quelled our urgent need for Biryani at a place aptly named ‘spicy venue’, we indulged in another authentic hyderabadi dish called Khubani ka meetha. Khubani is dried apricots which are then boiled in a honey syrup and served either with cream or ice cream. The Khubani ka meetha, tasted overwhelmingly of the sweet honey, the apricots had a firm if not chewy consistency to them, but it was the vanilla ice cream topping which really held the dish together. A few crunchy pistachios, or almond flakes would have added to the desert, I felt.

The next day we went on tour of the city, and also in search of the finest Biryani the city had to offer. We made our way to Charminar and that’s where the real Magic of the old world Hyderabad begins. The Charminar lies in the heart of the Biryani land. On one side is the famed Jama Masjid, on another side is the Unani medical college, on another side is Lad bazaar or churi bazaar where Burqa clad women bought dazzling bangles in varied hues.

I am of the firm belief that the best biryani is to be had at a muslim wedding , but we did the next best thing, we went to Shadab’s for lunch.

The biryani was divine. The rice grains were atleast an inch long, yet they were neither under cooked nor over cooked. Each grain of rice was separate from the other and each grain flavourful. We quietly contemplated the genius of the biryani. We ordered a chicken biryani and a mutton, so that I could compare both the tastes and both were equally good. The mutton was tender and almost melted in the mouth. The Kebab platter was good, but not brilliant. The falooda was similarly average but incomparable to the biryani. But Shadab had won us with its biryani, and could do no wrong in our eyes and even the finger bowls were the right temperature of hot water and lemon wedge.

We were so mesmerized by the biryani at Shadab’s that we quite forgot to try their Irani chai, which had been highly recommended by some one.
Now Iranians had enjoyed the patronage of the Nizams, and since then many Iranians have settled in Hyderabad, finding a little peace of their country in the architecture and cultural melting pot of the city. It is believed that even the Charminar, is influenced by the ‘char bagh ‘in the city of Isfahan in Iran. I gazed admiringly at the aquiline features of the Persian princesses in Chowmahalla palace. Sighing deeply at the sight of their near perfect noses, I had to make do with some road side Irani chai as my only Persian link to the by gone era. The tea was nothing extra ordinary which made me doubt the claims that it was authentic I Irani tea in the first place, or maybe my un-trained tongue just didn’t know any better.


The next day we headed for RAMOJI FILM CITY, and even though it has a number of eating places we were on our mission to try ‘har galli muhalle gi biryani’ so we headed for ‘Alampanna’ their hyderabadi restaurant. We reach Alampanna through the artistic meena bazaar, and the restaurant itself was like the set of some mughal movie. The Biryani lacked colour, but it more than made up in quantity. It was a mildly flavoured biryani, and a little more spices would have been nice. The chicken to rice ratio was also low. 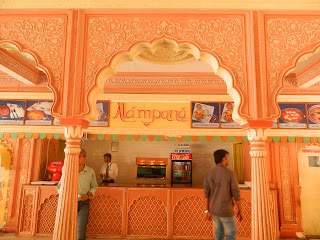 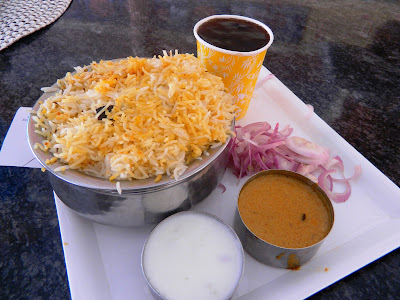 I had heard mixed reviews about Paradise. Some pretty much swear by the biryani, and the others are equally quick to disregard it. I happened to taste the paradise biryani in High tech city, and even though it did not have me swoon in delight, neither did it have me gag in distaste. Their was nothing wrong with the biryani; it tasted and smelt like biryani and yet it did not make you stop whatever else you were doing just to taste the heaven on your plate.

We had already tasted heaven in Shadab hotel, so we knew the difference. I think Paradise Biryani is like Mac Donald’s burgers; some people have never tasted any other burger other than Mc D, and so don’t know any better, infact they might go to the best burger joints and come back disappointed because they expected to be served a happy meal.
By then we were pretty sure that we had reached a plateau in terms of our quest of great biryani, and so when we went to Ohri’s Serengeti at Banjara hills, we decided to order the mutton and rice combination, but not as a Biryani, but in the guise of Rann Musallam. Here I  must take a moment of silence to relive the delectable dish. J 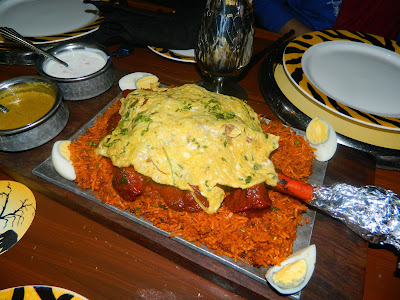 Rann is traditionally a leg of lamb marinated for many hours in spices and then slowly cooked over an open flame until the meat is falling off from the bone. It is the ultimate in rich Mughal cuisine. The ran was served on a bed of rice, which I think was marinated in the same spices as the meat. Traditionally biryani in Hyderabad is served with a saalan ‘gravy’ and some raita’yogurt’. But the Rann Musallam was so perfect that not a single side dish was required.
A meal as delectable as this, deserved Paan. Every great meal deserves to be ended with a mouth full of Paan, and talking with your mouth full about how immensely satiated you are. Serengeti went one step further. They served tiny shot glasses of a Paan drink!! If I was giving away awards for the most innovative dessert I would have gone with the Paan drink. It had all the sweetness and paan’ness of a Calcutta paan, without the supari. After the Paan drink they also served the real deal paan leaves stuffed with gulkand, but by then we knew of something better. 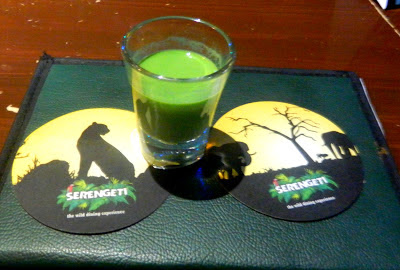 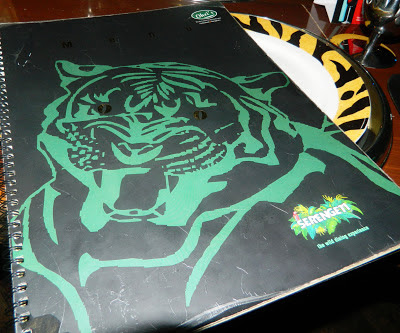 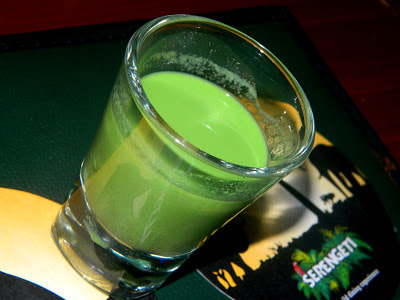 For the next four days I attended the APAO-AIOC conference held in HITEX convention centre, and had biryani for lunch almost every day. A note of appreciation to the caterers for having served up biryani to thousands of delegates,every day. Biryani making I believed is a labour of love, but these guys had to labour a lot.Each day there was a different biryani, chicken , mutton, prawn, and I also sampled the Chinese and continental cuisine. The crisp Jalebis with vanilla icecream, the hot gulab Jamuns, and the staff serving fresh watermelon juice made for a very tasty conference indeed. 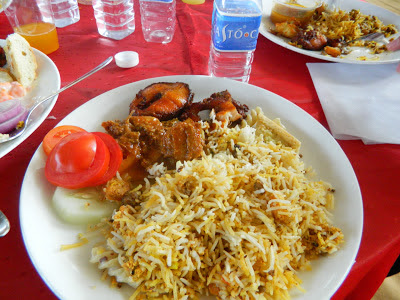 Hyderabad in many ways reminded me of Jaipur. Both places were once upon a time at the centre of great culture and civilization, they both have palaces which speak of a bygone regality, they both have unique and distinctive cuisines very much influenced by the previous rulers of the land, they are colourful, exotic places epitomizing the best that India has to offer.
Hyderabad, the land of pearls, and the land of Kohinoor diamond, the land of Hitech city and cyberabad, and the land of golkonda and charminar. It walks the fine line between the old and the new, ritzy malls rub shoulders with 400 year old mosques, and one of the ways to experience this exotic land is through it’s exotic biryani. 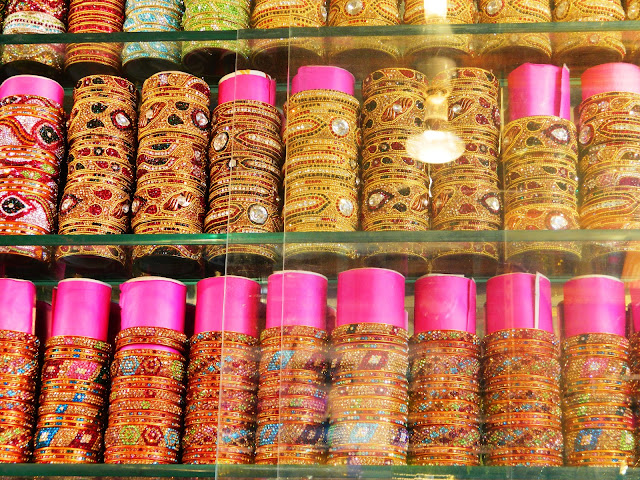