There’s no better way to wind down a hectic work week night than curling up on the sofa with home made dal-chawal and fried fish, and watch Masterchef. Homecooks ranging from carpenters to dentists, from accountants to drivers follow their passion to the kitchen and beyond, while you sit glued to the telly mesmerized by the freshest of ingredients, and choicest of produce, made to shine, pop, and crackle while being presented in ways you had never imagined possible for home grown chefs.

The recent Masterchef Australia season 6 hosted by Matt Preston, Gary Mehigan and George Calombris, had a gorgeous contestant named Sarah Todd, who happened to come down to our part of the world and not only make Goa more beautiful than it already is, but also host a 5 course dinner at the Park Hyatt, Goa.
Wow! A chance to actually taste the food that good enough to watch on prime time television! We couldn’t pass up such an opportunity and so on a rainy Saturday evening found ourselves amongst the other foodies of Goa, and the veritable whose who of the inner circle enjoying a tete a tete with Sarah Todd as we sipped on our pre dinner cocktails. 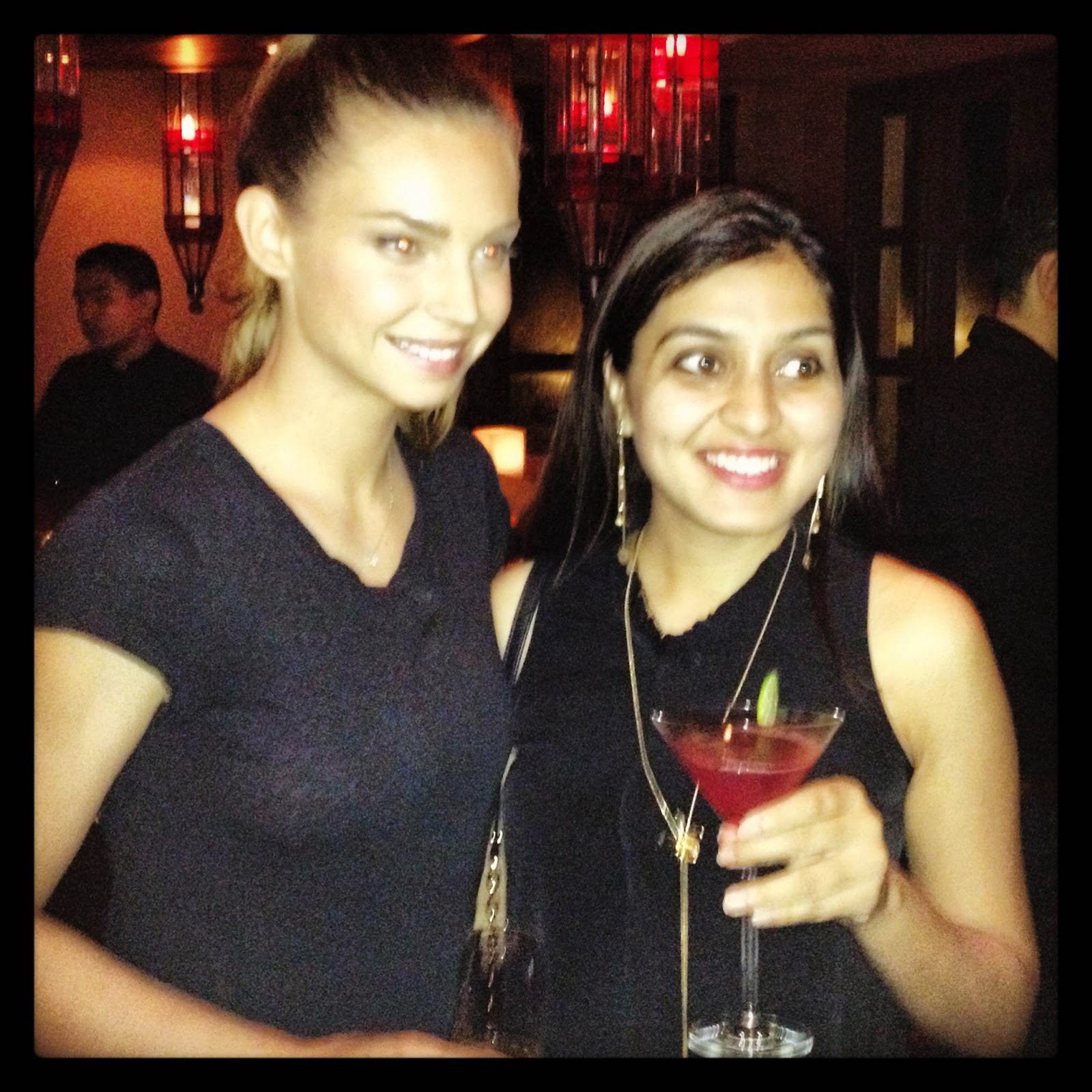 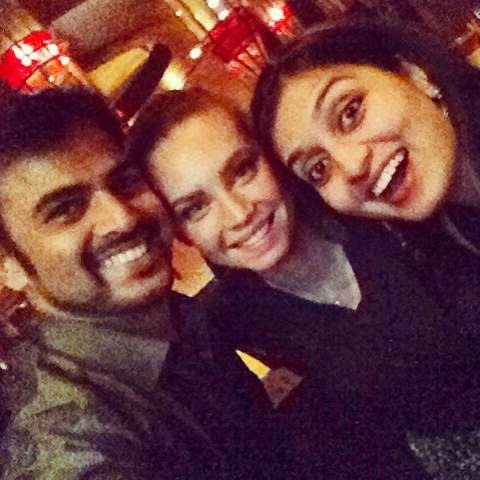 Tall and skinny, with an angelic face, Sarah Todd effortlessly manages to win the admiration of men and envy of women around her. A professional model having worked with the likes of Gucci and swimwear seafolly, Sarah has effortlessly made the transformation to a chef with her scrubbed sans-make up looks, and dedication to detail when it comes to food. A mother of a three year old, and an Indian origin fiancé, she was a huge hit with the Indian audience when she cooked aloo gobi for one of the rounds on the Australian show filmed in Melbourne. It’s her maiden trip to India, and having already been to Delhi and headed to Bombay, she knew she wanted to do a pitt stop in the ‘zen place of India’ , Goa.

The casa Sarita restaurant in Park Hyatt, goa was elegantly turned out for the event, dressed in centerpieces of yellow roses, and woven table draperies, sharply dressed servers and busy bee chefs.The open kitchen concept allowed us a peek into the world of prep and serve as the chefs went about drizzling sauces and sprinkling herbs as last minute touches to the courses. 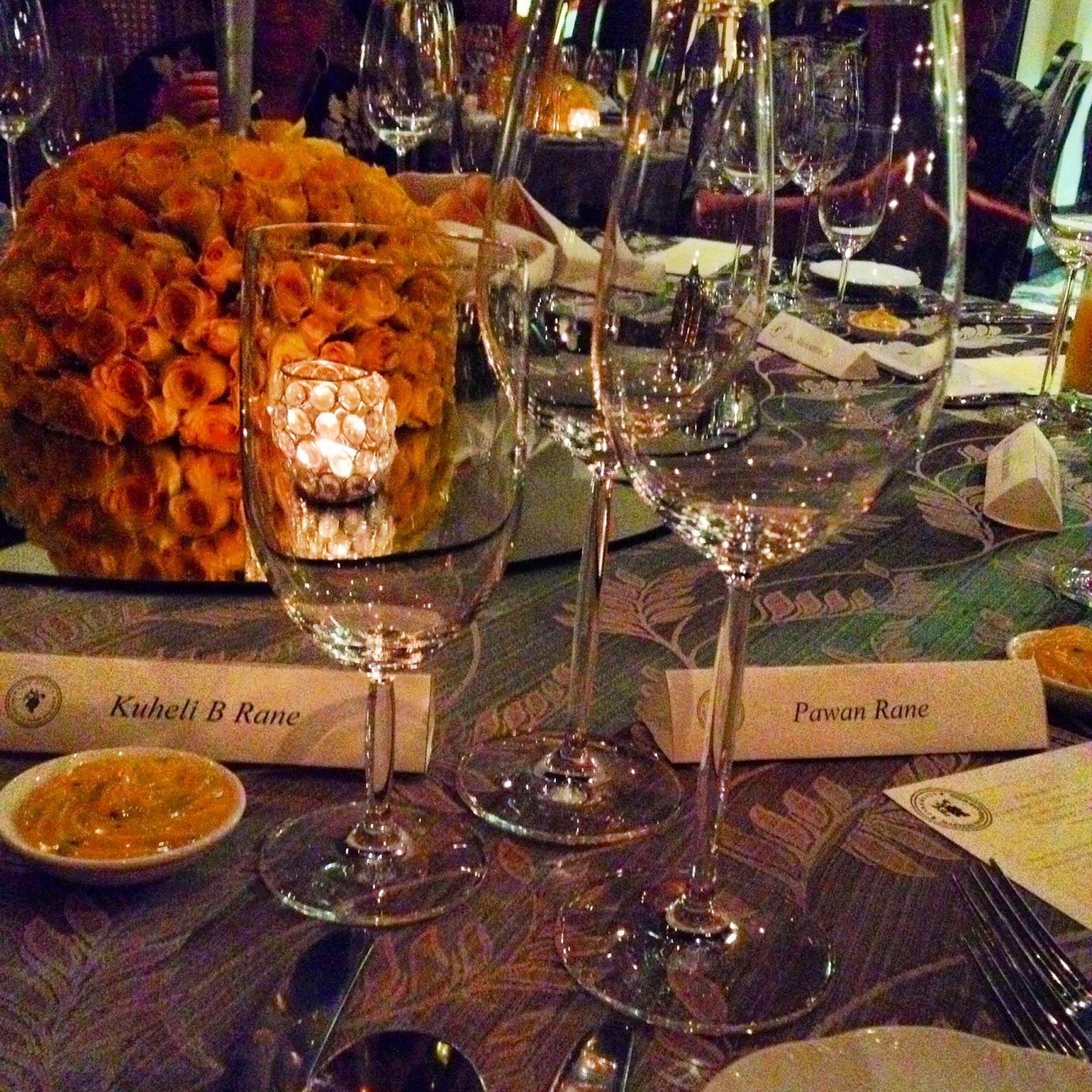 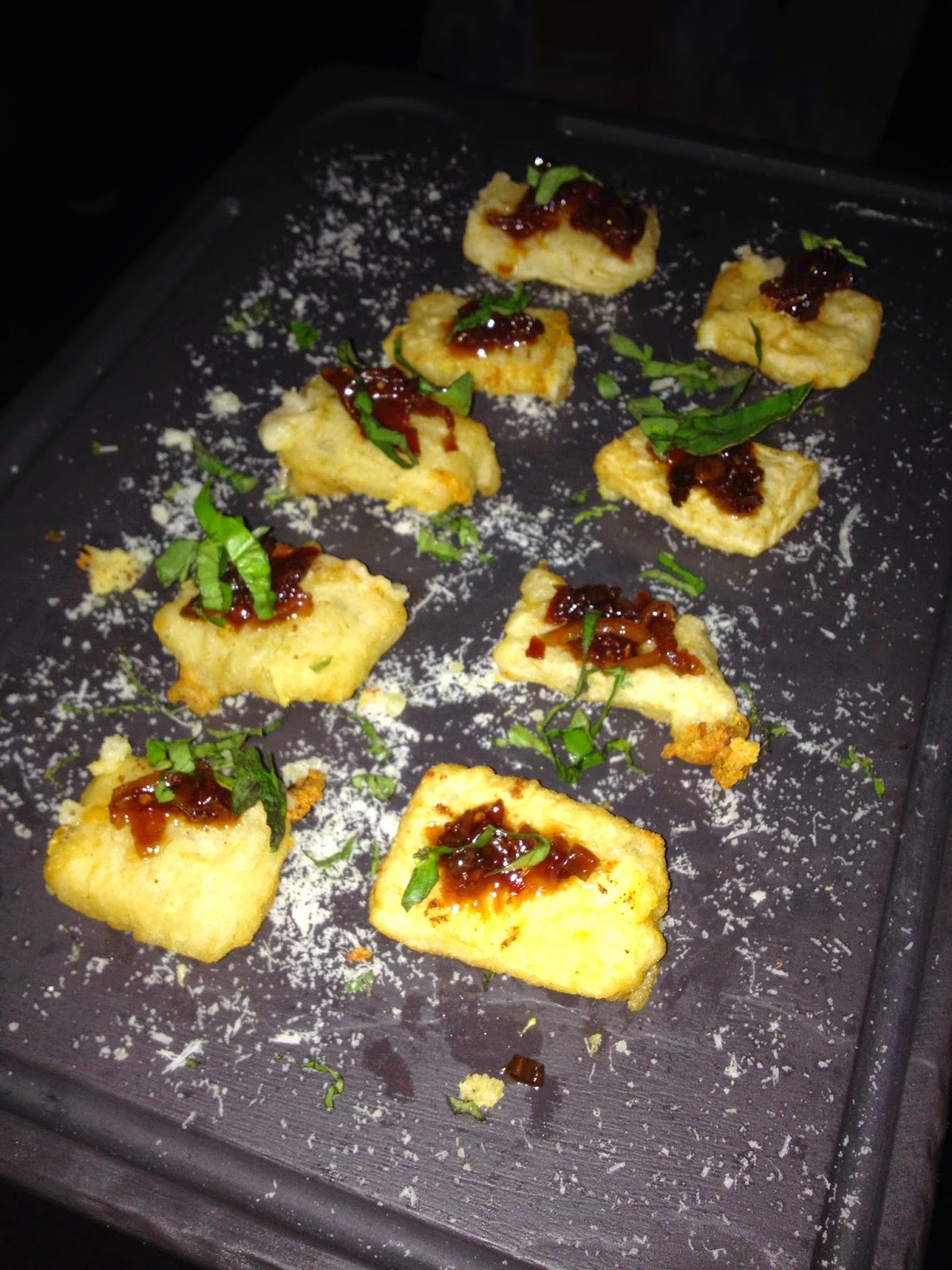 We started with the first course : a choice of a lentil salad with roast tomatoes and feta, or zucchini and peas pakoras with crab meat and dried fig chutney. The lentil salad was a bowl of health, complete with the daily dose of greens, roasted tomatoes and ‘chilke wali moong’ lentils, a strip of raosted papad added drama as well as crunch to the salad. Sprouting the lentils overnight would have added more flavor and added nutrition to an already healthy salad. I felt it was a bit bland for my Indian palate and would have loved a sprinkling of rock salt and a dash of lemon as dressing. 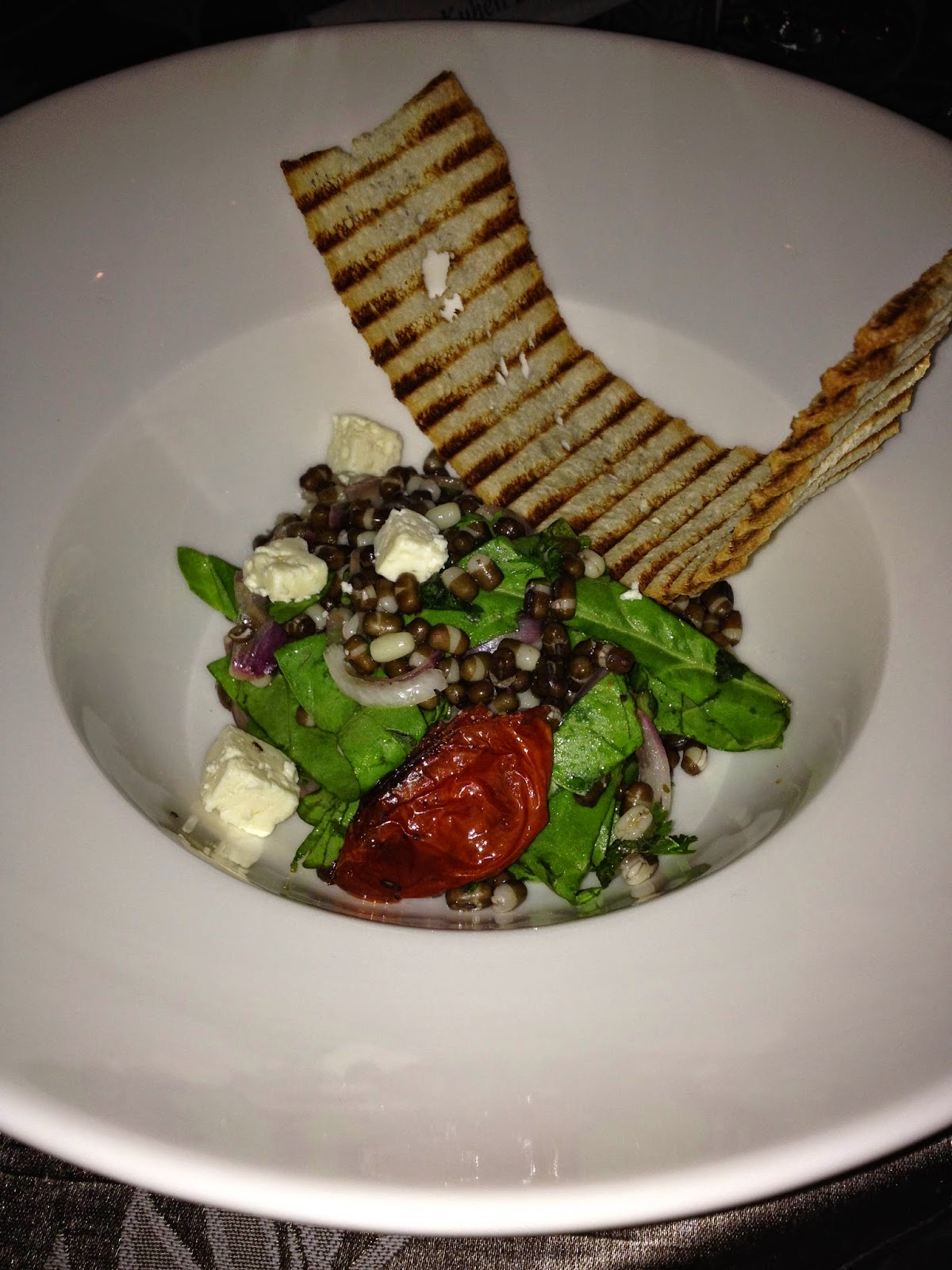 Next up was the chilled asparagus and ginger soup. Green was definitely the colour of the first with the salad bowl and then with the pale green cold soup. Mildly flavoured the asparagus really came across, and it was ably accompanied by the garnishing of slightly crunchy and sweet caramelized onions. What jarred were the large pieces of ginger which came in bite fulls rather than as a subtle after taste.

The palate cleanser of frozen kiwi lassi, was Sarah’s answer to the frozen yogurt craze that seems to have taken over health conscious foodies world wide. The humble lassi , the Indian yogurt drink, gets the Australian twist with kiwis, and then frozen to resemble a dollop of ice-cream thus tasting decadent even though its made with all the goodness of fruits and probiotics. Served as a palate cleanser between courses, this little green ‘fro-yo’ stole the show. 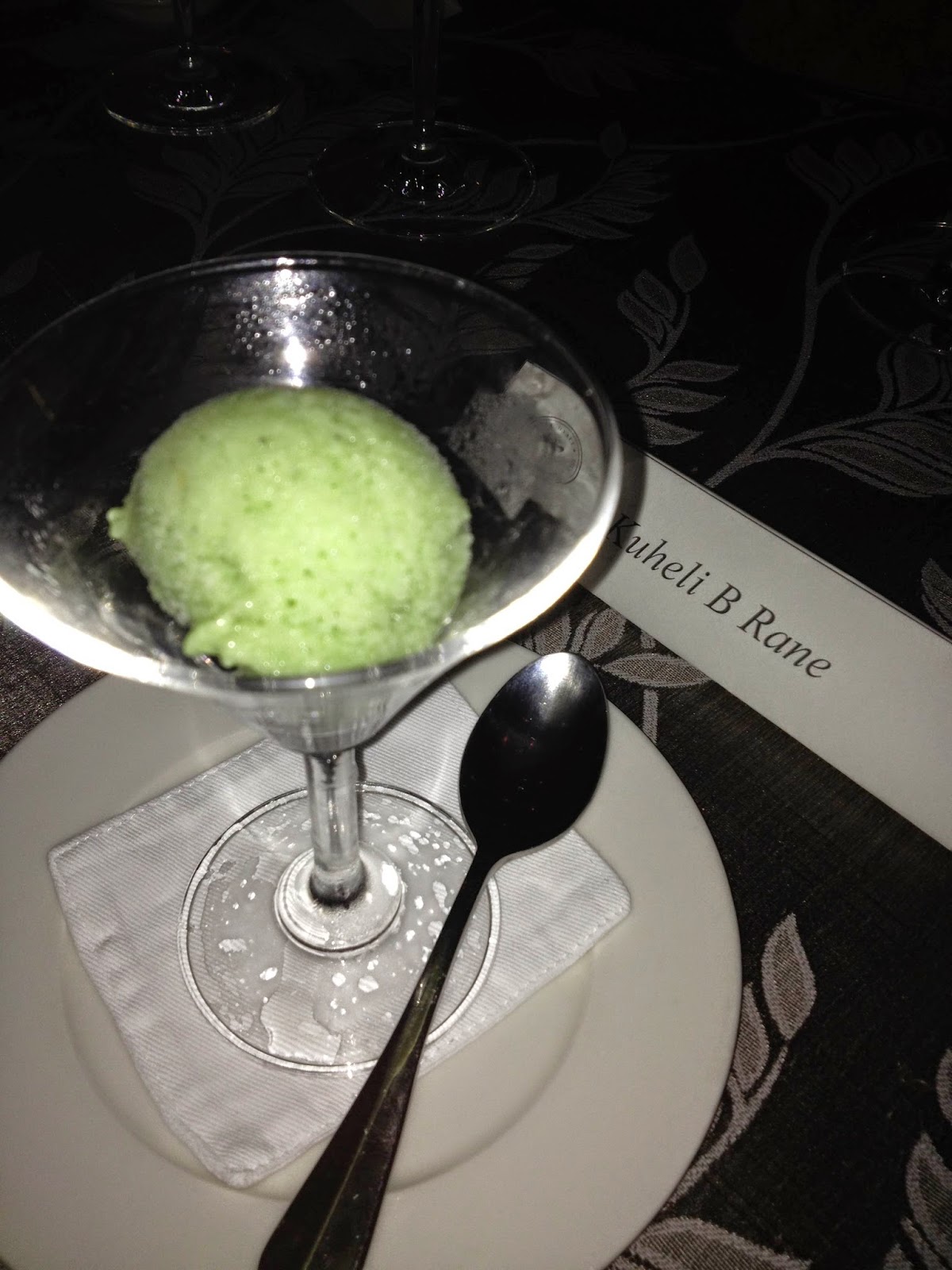 For main course we had a choice of Sarah’s famed Gobi paneer with Mint chutney, and a slow cooked shoulder of lamb cooked overnight and served with a port wine jus. To choose between cauliflower and lamb was a no contest at all, especially when we were a room full of carnivorous foodies. But since the cauliflower and panner dish had been such an emotional connect of Sarah’s with India, I decided to click a picture of hers with her vegetarian dish, and then made a choice to eat the spiced lamb instead. 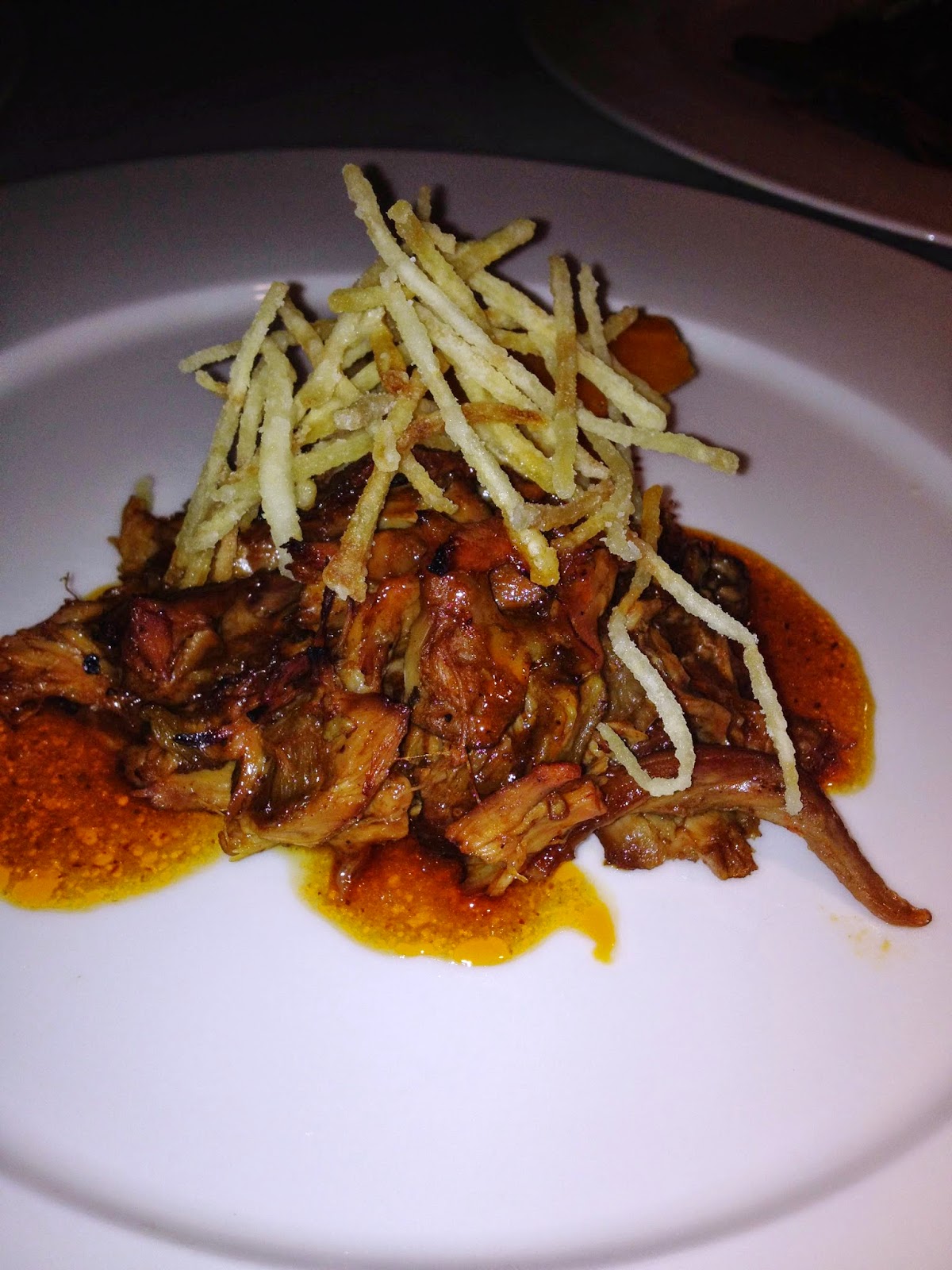 The lamb was packed with flavor, every single shred was covered in spices. The meat itself was tender enough even for the toothless, having been cooked at leisure. The jus had hints of cinnamon and cloves and had undertones which reminded of Indian kitchens redolent in spices. A few sweet carrots helped balance the spicy overtones, and a topping of crunchy potato fries completed the dish. Indians are a carbs crazy race, and I was craving of a sweet naan bread to wipe up all the gorgeous gravy. This dish interestingly was the only one with a marginal Goan touch. Executive chef Saulo Bacchilega informed that Sarahs original recipe called for a madiera jus, but they had made the decision to go with the Goan port wine.

To round up our culinary journey we had the vanilla and rosemary panna cota with walnut crumble and pears poached in red wine. This was a truly masterchef dish in terms of sophisticated plating, a whole range of textures and flavours from the crunchy walnuts to the crumbly biscuit to the sweet smooth pannacota and the liquored pears. Bellisimo! It was a dish too pretty to eat, and yet we had to make the difficult decision of either admiring it or savouring it. 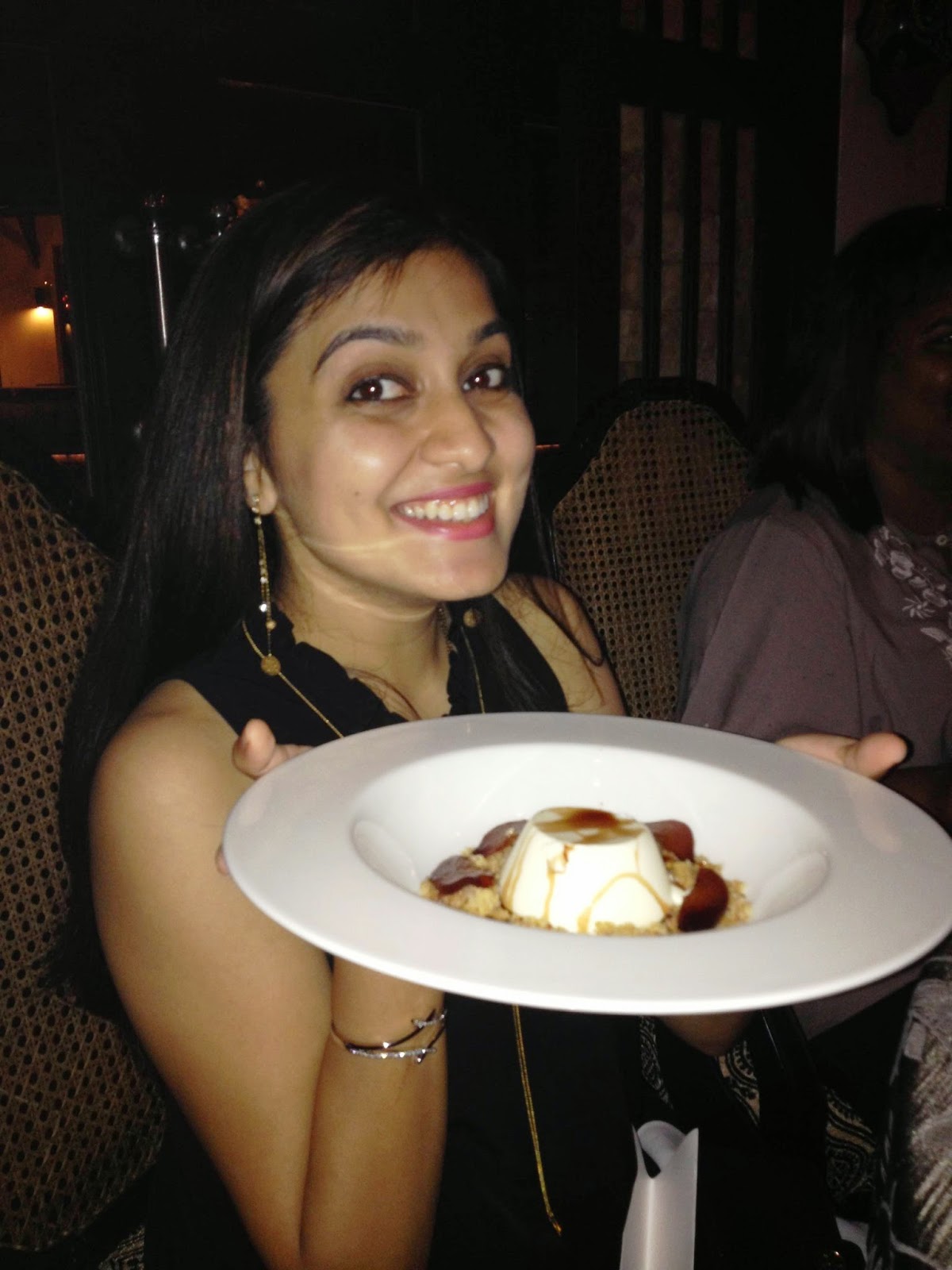 No meal is ever complete without chocolate. Chocolate for me is the veritable fullstop after the delightfully long and twisted sentence which is the meal. And we called it a night over chocolate truffles filled with fennel seed. 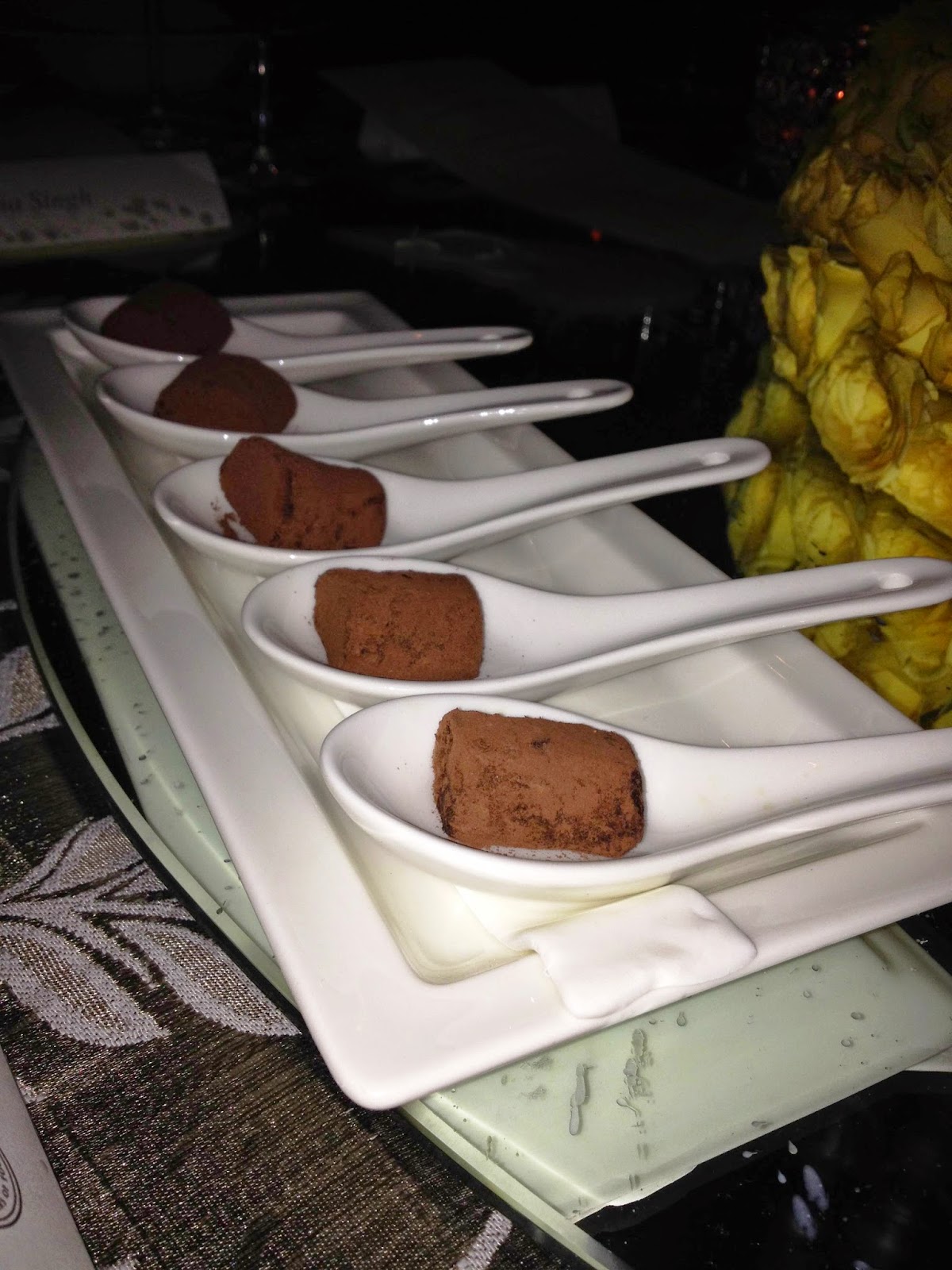 A meal is even more enjoyable when you have a lively and interesting company to share it with. Our host the gorgeous Sarah flitted from table to table, and also introduced each course making the meal into a personal conversation that she had with each of the guests. With each course she showcased a bit of her own personality as well as that of the country and city that she comes from. She shared her love for Indian cuisine and spices, and her Indian connect through her Fiance Dev and son Phoenix. A tiring day of interacting with strangers and smiling for selfies and yet she remained gracious till the very end. 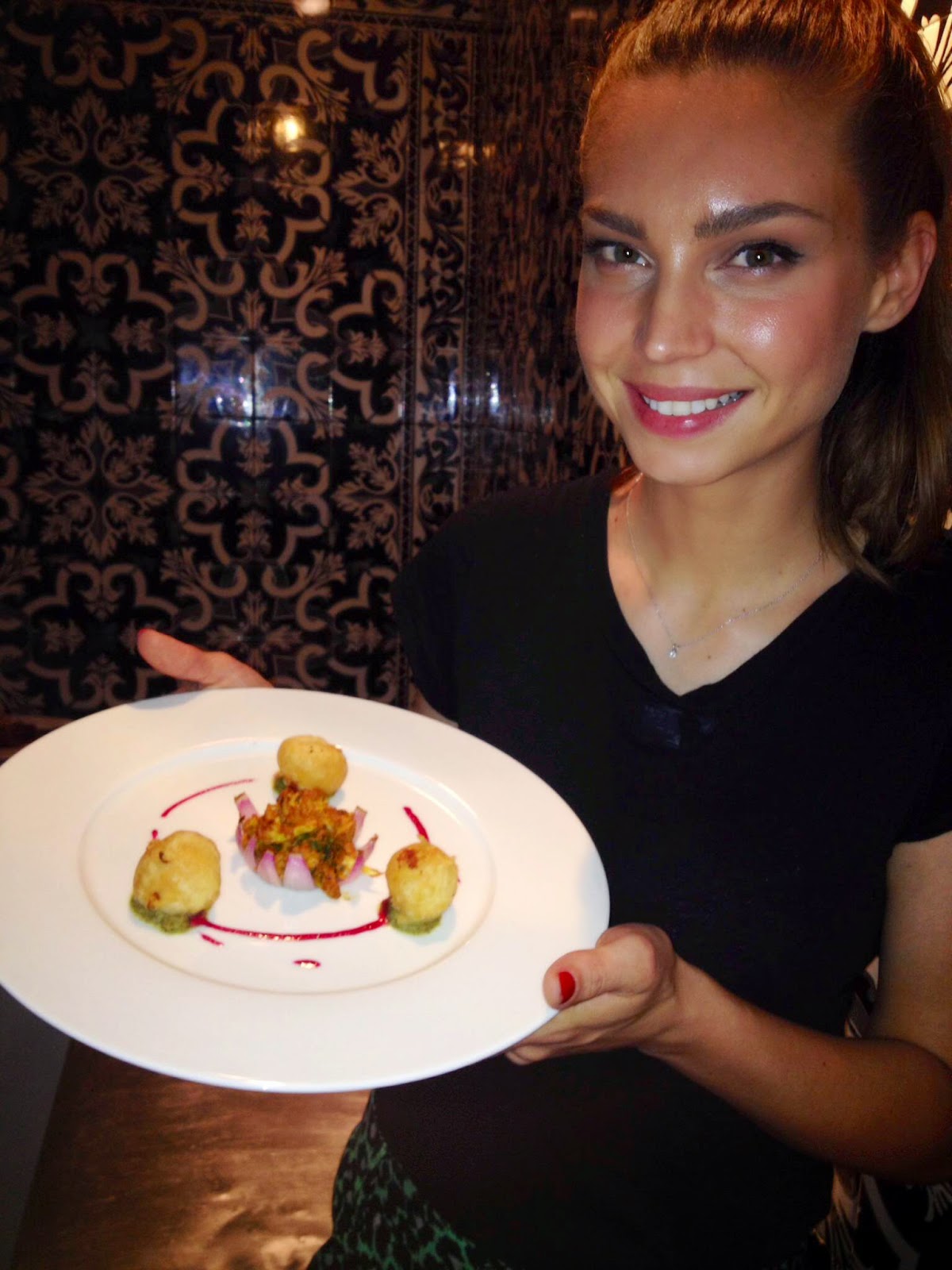 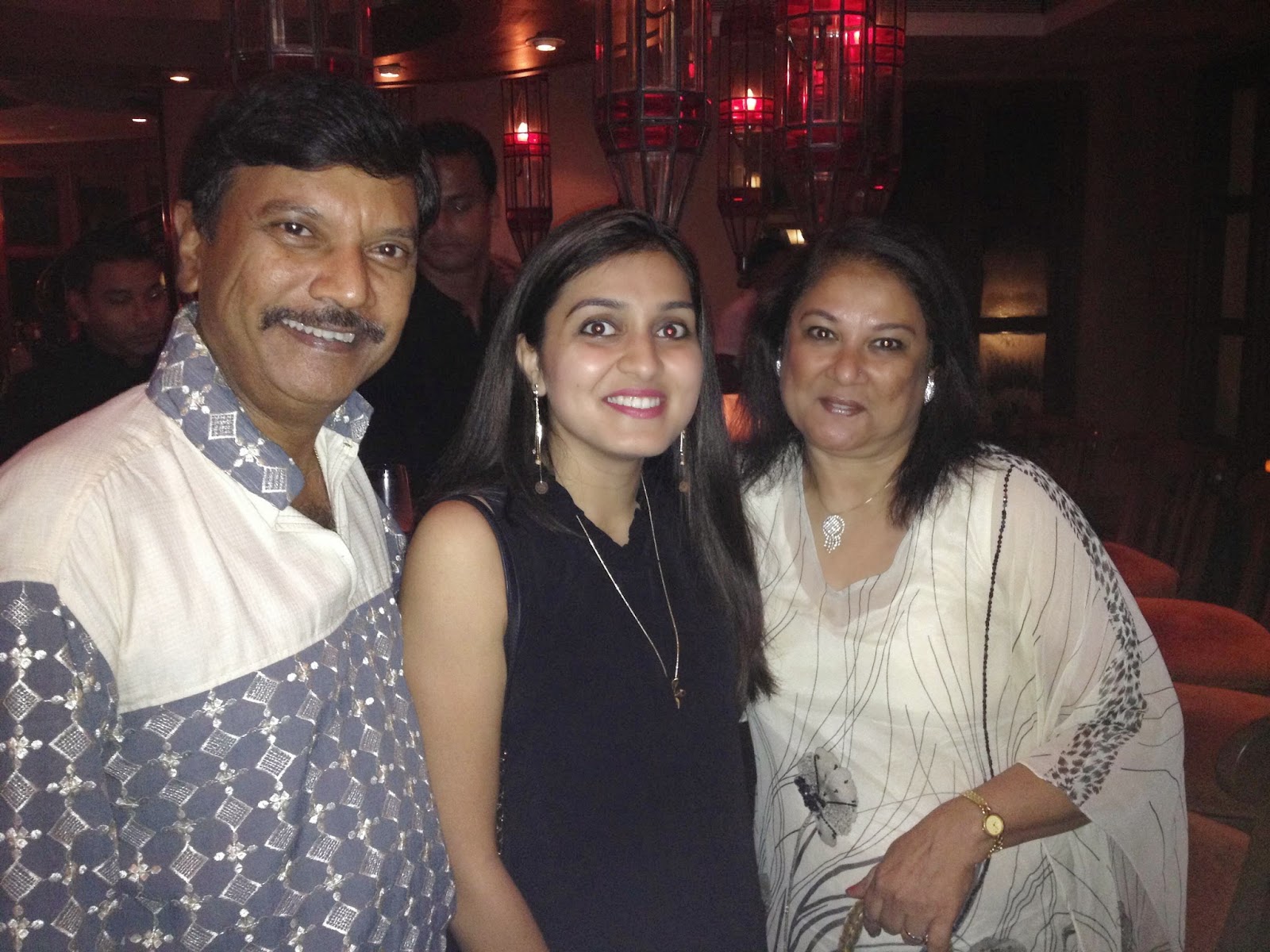 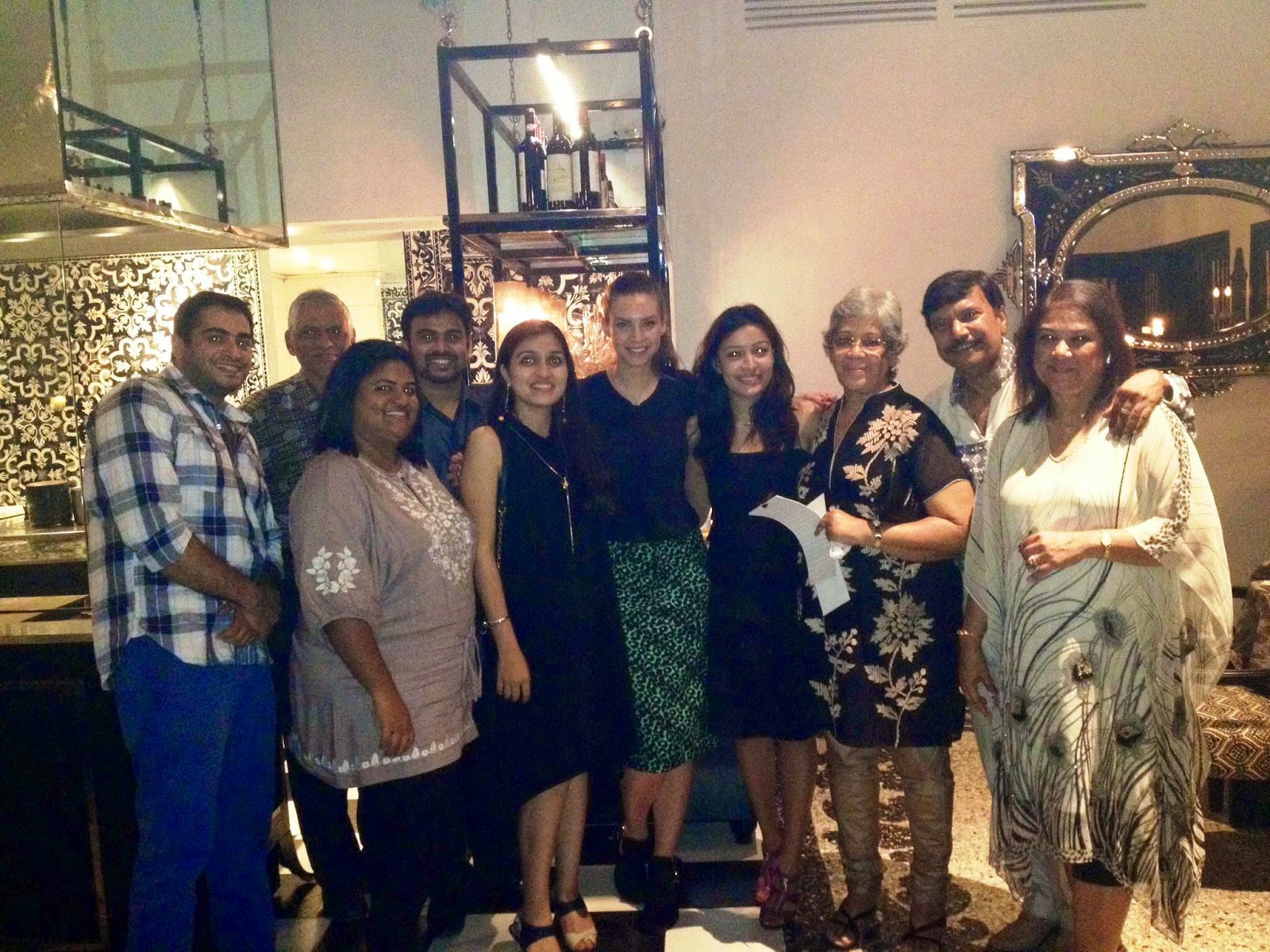 We were delighted to have shared our table with the most fun group of people. Jia singh a food and lifestyle feature writer and a nutritionist and her husband Aviraj singh, a super cute couple from delhi who kept the conversation alive with their travel tales and chiding and leg pulling. Odette and Joe mascarenhas who are first lady and man of Goan cuisine in Goa, Joe sparkled with wit and general bonhomie and fit right in with us youngsters with his zeal for life. Edra our personable table host who works at the park hyatt joined right in with us foodies as we not only ate but also clicked and snapped our meals. A lovely couple were gifted this beautiful experience by their daughter Ayesha Barreto who is an RJ with a local radio channel shared tips to a happy and successful marriage even as Pawan my husband and Aviraj, decided that they were comrades when it came to the ‘shaadi ke sideeffects’.