I was never too good at geography, all those boundaries and states, and their rivers… And yet I love food from every region.
I think I went about geography all wrong, I think I should have started from the point which I liked, that is regional food, and then gone from there on to more mundane things like which region has rice plantations and which have wheat fields.
My first encounter with Kutchi Dabeli was in Bombay and to this day I associate it with Mumbai and it’s fast paced life. It was quite a revelation. It looks like a vada pav and tastes a little like pav bhaji, and yet has its own place of standing amongst the chowpatti food items. (for those who do not know about the Mumbai food stalwarts –vada pav and pav bhaji, don’t fret I will introduce them to you in coming posts
) 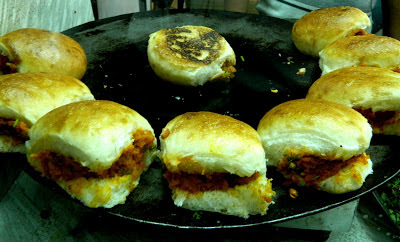 For a long time I thought Kutchi was not the place ‘kutch’ but infact “kuchi” which means raw in Hindi. I thought may be because they use raw vegetables they called it kuchi, but mind you the kutchi dabeli is well cooked. The mystery was solved when I realized that the hitherto ‘mumbaiya’ food, was actually a Guju, from kutch in Gujarat.
But enough about the geography and more about the food.

Kutchi Dabeli is a spicy potato mash, which is stuffed between a bun ‘pav’ and seasoned with tamarind and mint chutney, then heated in molten butter till the bun turns crisp and brown. Then the whole delicious thing is coated in crisp sev and peanuts. In terms of food items it’s quite amazing. I mean, what do judges in cooking shows look for in a great dish? They look for taste, texture, colour, presentation, and a something special to remember the dish by. The Dabeli has it all, in terms of taste it has an extremely spicy potato mash and tangy tamarind and refreshing mint n chilli chutney; in terms of texture it has crisp butter fried bread, soft mash filling and crunchy peanuts and sev.in terms of colour its all gorgeous golden brown and green and pink, in terms of presentation its neat and sleek, easy to eat finger food. But it’s the something special which does it for me when it comes to dabeli- pomegranates. They add the pink colour in the dabeli, they add the unexpected sweetness to the spicy potato, and whoever thought of eating pomegranates stuffed in bread is a genius.

Here’s a quick recipe for dabeli which I found to be very useful.easy dabeli recipe
Now that we have established that dabeli is nearly perfect when it comes to fast food, there remains the little point of is it gujarati or bombayite. Like many gujaratis in Bombay the Dabeli has blended seamlessly into the ethos of the land it resides in. Like a typical gujarati businessman, the Dabeli is all about ‘no non sense value-for- money’ and like Bombay, it manages to pack a lot into a little space.
at March 02, 2013 6 comments: