The plants watered , the doors latched and double checked, all electronic gadgets switched off, inform the milk man, the newspaper vendor and neighbours of your imminent holiday, pack the sunscreen along with the prenatal vitamins and we are off to your babymoon.

Ever since I got pregnant I started dreaming about our babymoon; that last retreat sans the diapers and the baby carrier, our last ‘couples only’ holiday for a long time to come. Babymoons are such a draw that in a research by Babycenter, over 60% of American couples opt for a babymoon prior to the arrival of their little bundle of joy. A baby moon has many advantages like a relaxing break of the mom to be, a time for the parents to be to bond as a twosome, relive the memories of their care free life till that moment and more than anything a beacon of light during the morning sickness filled first trimester.
The best time to go for a babymoon is from 14 to 26 weeks but we waited for the 20 week anomaly scan before setting out knowing that everything was hale and hearty, also one is over the tumultuous first trimester, and still gathering courage for the last haul in the last few months. Its your prize for making it so far, and it will hold you in good stead as warm glowing memories during the sleepless nights in the first few days post partum. The advantages of a babymoon vacation are many, and I didn’t need to be convinced twice that I needed some pampering.

After much deliberation we were down to Thailand, Bali, Srilanka, Coorg and Goa as our destinations. Bangkok because my doctor said its best to choose a “city destination” with hospitals in case of any accidents, but as much as Thai cuisine is my favourite I wasn’t sure of the MSG in the food, Bali is one of the top babymoon destinations but the long air travel was a deterrent, Coorg is gorgeous with its coffee and orange plantations but the nearest airport is a good 5 hour drive away and changing one flight and then driving another 5 hours could be tiring, Srilanka seemed ideal but it’s a place that I wanted to see extensively and knew that I would want to take in all the sights and sounds rather than relax, and so we decided it best to go to a place where we had been before, Goa.

Again after much online research I chose Alila Diwa resort and spa, situated in the rustic by lanes of Majorda, far from the madding crowd and boasting of a luxuriously lazy retreat amongst sylvan surroundings. 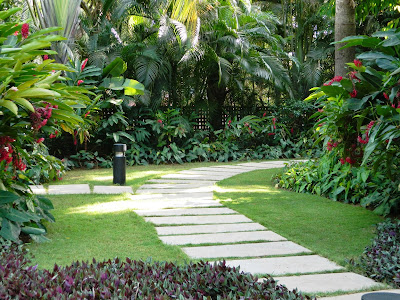 Not only is the place impeccably landscaped and extensively spread out, they have a premium complex of 35 rooms where every room faces the swimmingpool, and this exclusive annexe has its own private pool as well as 12 hour bistro. Even though the hotel was hosting a large group of over 150 people for a wedding we heard none of the noise so typical of an indian wedding revelry.

(tip: since a large part of the coming months will be filled with baby cries, choose your destination such that there is minimal wailing and toddler tantrums of kids of the other guests.)

The room was thoughtfully provided with a pregnancy pillow, those ergonomically designed wonders which support your back and belly while you sleep.

(tip: prolonged lying on your back can lead to the womb compressing the large vessels in the abdomen the inferior vena cava, thus reducing the blood returning to your herat, a safer and recommended sleeping position is the left lateral, or lying on the left side)

We were greeted with a lovely fruit and cream cake, something they regularly do for guests celebrating momentous occasions at the resort. You may even inform the inhouse concierge to make the arrival special by letting them know of any decorations that the family/friends would like to surprise you with. The cake itself serves as a great midnight snack for the always ravenous mum-to-be.

(Tip: some mums-to-be have very specific food cravings and it would be a good idea to let the hotel know in advance, or if they are foods that you can carry with you, that’s a good idea as well.)

Breakfasts are the most important meal for the pregnant woman, and even though a love a hearty breakfast buffet, I preferred something small frequent meals now.Thebistro in the diwa club has breakfast from 7 am to 7 pm, allowing for late risers to have a brunch, and we were never in a rush to catch the 10 : 30 deadline that the regular buffet had. another plus was that I could head over to the bistro for a juice and some fruit earlier in the morning, head over for a bit of prenatal yoga at the gym, and head back for a more hearty breakfast a little later. Flexible meal timings as well as the choice of breaking my morning meal into smaller portions were major pluses for me.

I am a self confessed spa junkie, but very few places offered pregnancy spa experiences . At Alila Diwa, Dr Arjita, an ayurvedic doctor who is also trained in hypnotherapy and pranic healing spoke knowledgably about the various benefits of massages for pregnant women. Massages help the mother-to-be to relax, helpd the lymphatic drainage and thus the water retention and pedal edema that many women suffer, help relax the muscles and the various aches and pains associated with carrying the extra weight. Oils which were safe in pregnancy were virgin coconut oil, ylang ylang, almond oils.

(Tip: in India we celebrate godhbharai/fulam/dohal Jevan/valakaapu/seemantham a type of baby shower. Unlike the western baby shower where guests bring gifts for the baby to be, it is considered inauspicious to bring anything for the yet unborn. So most common gifts are for the mother in the form of clothes or jewellery. A babymoon package for the couple, or even a pregnancy spa for the mum-to-be, or a couples spa retreat would be thoughtful gift ideas.)

My masseuse was Brinda who has had extensive experience working with patients with chronic illnesses as well as pregnant women. Rhythmic sweeping movements in long uninterrupted waves helped relax the muscles. Gently kneeding away the knots is scented Jasmine oil as one lay in the lateral position, and with relaxing music bringing about a holistic feeling of well being.

(tip: heat therapies like mud baths, steams and saunas are best avoided in oregnancy as the increased core temperature and dehydration could be potentially harmful.) 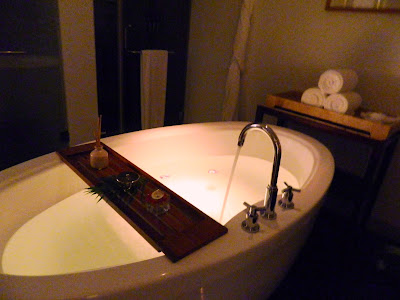 Our rooms itself had the most uh-mazing bath enclave. Boasting of a his and hers cupboards, his and her wash basins, shower cabinet and a glorious bath tub complete with scented bath salts and aroma oil reeds, and mood lighting, this was one ‘bathroom’ that I would love to airlift to my home. The bath tub allowed you to titrate the temperature to a pregnancy safe temperature while still allowing you to enjoy a ‘spa like’ experience in the comfort of your room. Be extra careful while getting in and out of them though.

Now having read a ton of pregnancy literature all extolling on the virtues of swimming for the mom, or generally the weightlessness of being felt in a pool, I was eager to experience the same for myself. Alila Diwa has 3 swimming pools, a semi private one in the Diwa club, a more grand infinity pool overlooking paddy fields in the main enclave and kids pool as well. The best part is that it is at a comfortable 3.5 feet to 4 feet depth for the larger part allowing for just waddling in the water without fear.
While most sites speak of swimming hardly any of them mention the problems of pregnancy swimsuits. Lucky for me Alila Living the in house boutique shop had an XXL size for me. The Alila living store also had some lovely trinkets which you could ask your husband to pamper you with, after all shopping has its own therapeutic advantages. 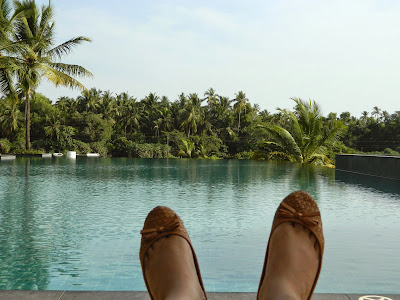 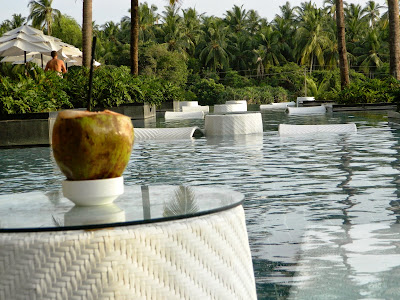 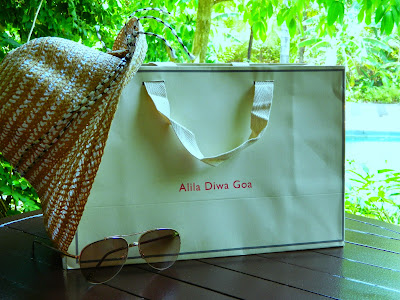 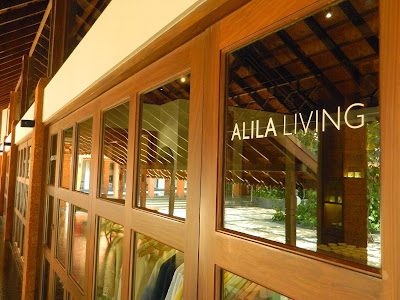 The unique half submerged swimming pool bar wa such novelty that I chose to sip on a chilled tender coccnut water as I gazed out at cocnut groves in the distance as well as being surrounded by them. Sure it costs 8 times the amount you could get them at the beach, but then you can’t put a price on some experiences.

The Majorda beach is about a 15 minute walk from the resort, and they have buggees to take you there as well. Catch the sunset by the sea, and then head over to the nearby beach shacks selling free flowing comfortable lounge wear so perfect for the burgeoning belly. Soft cotton kaftans in pretty colours were haggled down from 800 rupees to 400, making me extra happy with the retail therapy.
No holiday is complete without delectable food and g-astronomical amounts of it for the ‘always’ hungry ‘feeding for two’. 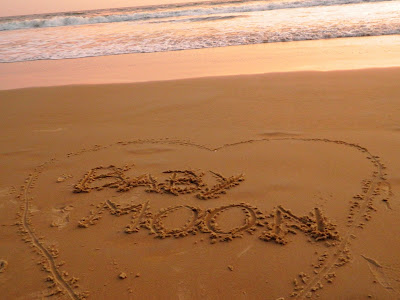 We dined in the award winning spice studio and were amazed at the absolute faultless food served. The kozi vartha kari chicken cooked malabar style with Appams was tangy with tamarind and redolent with curry leaves and south Indian spices, while the dhabe ka gosht, mutton cooked Punjabi style played jugalbandi with our taste buds.
A grand selection of wines of which the hubby partook, and while I wallowed at my ‘alcohol ban’ the virgin litchi mojito was such a fabulous non alcoholic drink that I envied him no more. The sweetness of the litchi crush, freshness of mints, tangy lime, and the surprise hit of green chillies is just right to drive any pregnancy blues away.

The dinner at Vivo was more of a multicuisine spread, and we spread out across the globe with Italian Pizzas and oriental honey glazed pork ribs. They have an extensive buffet to choose from as well. 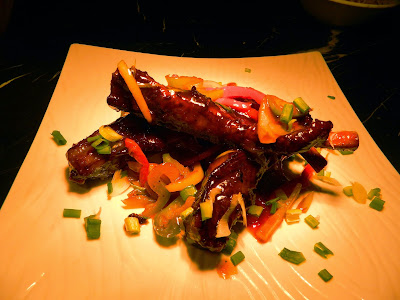 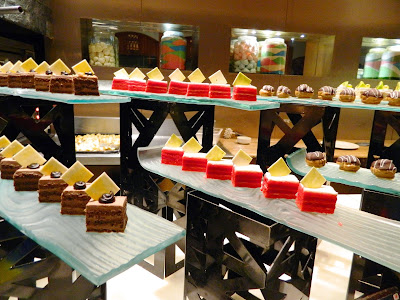 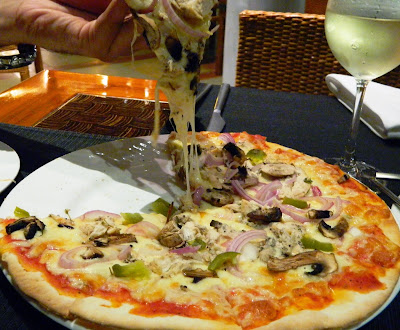 Building a new human being is tough work, and as soon to be Mom’s we all deserve a bit of Tender loving care, and a vacation from the worldly worries is just what the doctor recommended.we had relaxing spas, rejuvinating walks on the beach and invigorating swims, the best bit was just lazing around with no agenda and no schedules. 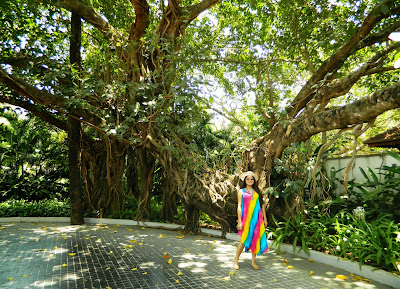 (tip: if you have a high risk pregnancy, carrying twins, or have older kids at home a staycation is a good idea. Check into a hotel/resort in your home city so hat in case of any undue emergency, you are easily accessible)