Now, I know that it is one of the most vexing problems of a woman’s life but seriously, what does a food blogger wear? Most would say , well , you yourself are a foodblogger. I maybe delusional, but not that delusional, yes I loved food and occasionally dabbled in writing about my travel tales, but could I compare myself to that enigmatic breed of people who not just dabbled, but dipped their paint brushes in glorious amounts of food adventures and drew bold brush strokes of exquisite food blogging masterpieces on the wide canvas of social media? God, no.

I gave up defining a food blogger, but toyed with the idea of wearing patrakar type clothes. I could totally rock the khadi kurta , denims and a jhola look.

Anyways with no small amount of trepidation, and a fair sense of not knowing what I was getting myself into, I decided to go nevertheless, to the FBAI dialogues and the IFBA 2014 at JW Marriott, Mumbai.

Here’s what I learnt over the days discussions.

3.       It’s tough for the restaurateurs :  Well I have seen the movie Chef, and how the power of twitter could make or break a man’s business or even his reputation, but was it actually a concern in India? Yup absolutely! Most of the chefs on the panel, and even the big names in the food journalism industry spoke about the grief they got from so called ‘authority on the way a dish is cooked, because their mother makes it that way’ food critics on social food portals such as Zomato, Burrp, and such. Chef Nikhil Chib infact spoke of a time when one of them tried to teach him how to make a soufflé! The sheer audacity! I could literally hear Shahid Kapoor from Haider screaming ,”chutzpah ho raha hai, chutzpah.”

In all honesty I love reading trip advisor reviews, but then I guess I know where these guys are coming from. Wouldn’t I feel the same way if a patient came and started teaching me how to prescribe glasses?

4.       These guys really know their Super Heroes: So both chef Sanjeev Kapoor and the inimitable restaurant reviewer Rashmi Uday singh both quoted spiderman and “with great power comes great responsibility” again warning the food blogger community from commiting chutzpah, and writing about food responsibly. While our host for the night the hilarious chef Saransh Golia quoted star wars with the ever popular ‘ May the force be with you’.

5.       It’s tough for the PR groups of hotels as well: Nikhila who handles the Taj group of hotels in Bombay spoke about how the average consumer had an attention span of just 8 seconds, lesser than that of the goldfish, and to reel these consumers in was not an easy task. (
for the record she didn’t use the term reel, I just extended the Goldfish simili) But what she did say was that how to keep the consumer interested was a constant worry ‘ she believed in the power of the pan, over the power of the pen’ and even though she did encourage food journalists to come and experience the hotels culinary fare, she had faith in the fact that good review or bad, the ultimate test was not in the text but in the taste, and if you have a good product even with bad press, people would walk in that door. Café zoe too echoed that thought and said they had spent just 20000 on PR since the time they had opened.

6.       The food business is all about innovating, which has it’s hits and misses: Greg from the barking deer spoke about their masala chai beer as part of their micro brewery which had done really well, while a few other chefs spoke about ‘fusion food ‘ like jalebi flavoured cheese cakes not really making the cut. Trial and error was the name of the game. Greg from one of the first micro breweries of Mumbai shared that even though a stand-up comedy night seems like a great idea, it hadn’t really worked for them, while a trivia night on the ‘Game of thrones’ had been received well. What will bring in the Happy customer at happy hours is a question with no right answers, but bottom line is, you have GOT to have a product with VFM- value for money.

7.       Times have changed for the chefs: Chef Sanjeev Kapoor reminisced about the time when as the executive chef of a hotel, he had been asked by the GM of the hotel, to not mix with the patrons, and know his place which was ‘in the kitchen’. Chefs today are on prime time television, they are the celebrities, and that’s where their place should be. Chef Himanshu of the Marriott said that the ‘food blogger’ had been instrumental in bringing about this change. whistling time!!

8.       Revenge of the Home cooks: Sneha from Popadum got bored of all the ‘fusion food’ and craved for some ‘comfort food’ so she decided to open her home to people who wanted the same. Turns out a lot of people wanted to sit on the floor of her dining room, and eat of a banana leaf. Rushina MG from APB cook studio spoke of a time when ‘exotic food’ meant buying baby corn and mushrooms at the vegetable vendor, and today we have artisanal bakers, people who make and sell cheese, and bespoke chocolates better than the ones at dutyfree.

9.       The you tube success story: Aditi Rajvanshi spoke eloquently and at length about how ‘the common man’ or woman is taking to youtube to make their version of home videos. So cute I thought, I personally watch only music videos on youtube and so was flabbergasted to know that people watch 6 billion hours of video per month, and 100 hours of video is uploaded per minute. Go figure! The cool thing is that a 53 year old lady Nisha Madhulika has a hindi recipes channel on youtube and makes more money in a month than the average 30 year old techie at google. We also got to see the top 10 most watched food shows of youtube and to believe it or not Nigella Lawson was not on that list, but our very own Sanjeev Kapoor was making us proud.

10.  Even the connoisseurs love their tapri chai: Anaggh who was one of the panellist spoke passionately when he said “when the waiter comes and dumps the chaas on the table, and a few drops splash out on the table- WE LIKE THAT YAAR!” It spoke of simpler times when ‘social ‘ meant hanging out with friends and not’ ‘social media’, it brought back memories of Milan ki chai for me. Milan the small tapir outside KEM hospital in Parel, where doctors and patients alike sat on the rickety wooden benches drinking their cutting chais. It reminded me of post night duty mornings when one went for the bun musca, double chai and the inimitable ‘Mysore masala dosa’ with beetroot and grated carrot, as we exchanged pleasantries with other medicos from Tata cancer hospital and Wadia children and maternity hospitals from across the road. We didn’t mind the chipped glasses, the way they didn’t mind the stains on our coats.

Later the same day, after the super interesting FBAI dialogues we had the IFBA awards night. That’s Indian food blogger awards for the uninitiated. What amazed me were the different types of food blogs out there. You have the recipe blogs, the blogs on baking, micro blogs which run on instagram and FB, travel and culinary blogs, vegetarian blogs, regional cuisine blogs, photo blogs, restaurant review blogs, even blogs by chefs! Wow, these guys have food blogging down to a science. 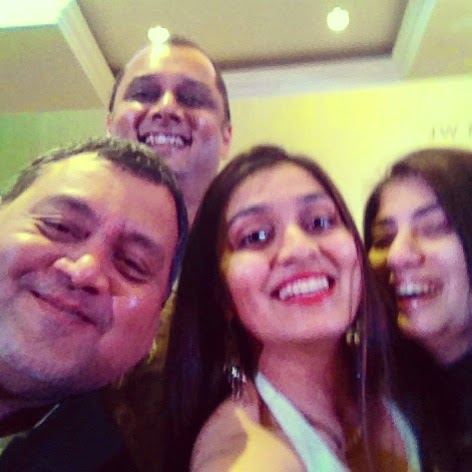 To my delight and surprise, I won the runners up award in the travel and culinary section of the IFBA awards. Got to meet some of the most celebrated names in the food industry, and share selfies with some of my favourite food bloggers. Majorly stoked, needless to say.
Special mention to Sameer Malkani co founder of Food bloggers association of India and his wife Saloni for making me feel so welcome. Also the guys at JW Marriott, I cannot even imagine what must have gone through their minds as they served  a house full of food lovers, food critics, lunch , hugh tea and dinner. They served up their creations to be loved, hated, critiqued, instagrammed and tweeted. They did it with utmost grace and hospitality. They shared recipe tips even as they worked the live stations, they held up plates of food so tthat bloggers could get the best shot of their amuse buche. They opened their hearts and their wine cellars, for a fantastic event.

I started foodie trails as my personal lip-smacking journey through life. Getting to know people and places through the food they serve. I journed the short distance from Goa to Mumbai for this event, and actually made the long journey from ‘them’ to ‘us’.
Somewhere during High tea and the cake mixing session, I found myself next to a girl and asked her “so what’s your blog about?” (that was the most used icebreaker at the event by the way) and she answered that she hadn’t really started a blog but would like to. “I really do not belong here” she said,
“you like food, right?”
“Oh I LOVE food “ she said
“well then you belong here”

Yup, that was me, giving random gyaan to anyone who was willing to hear. Me acting all food bloggerly.

As I sat through the morning sessions I would whatsapp my friends back home “these guys are so committed, these guys really know their stuff, these food bloggers.”
But, as the day came to a close I had finally realised I belong to this awesome community of food bloggers, it’s no more they but we.

To food lovers everywhere, if any of this made any sense to you, well then “welcome to the lipsmacking journey of food blogging” 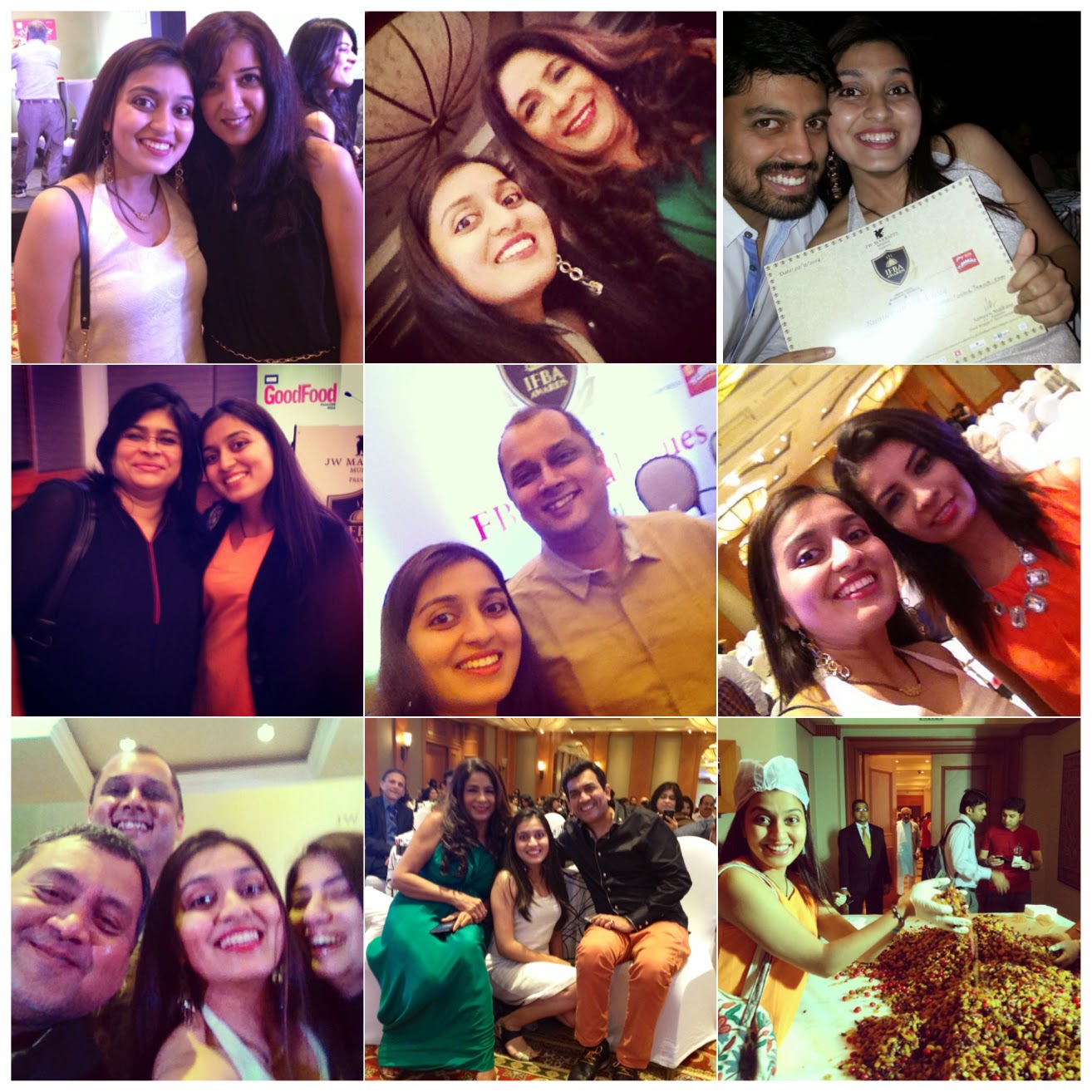