For the longest time , I didn’t associate the traditional Christmas cake with a Christian celebration, but an Armed Forces celebration. Part of it was because I grew up as an Army kid, travelling around the country, as my father got posted from Delhi to Punjab, to Maharashtra. And no matter what part of the country we were, we would always have Christmas cake. It all begins during Diwali. Again, I am not sure if it’s an Armed Forces tradition, or just a North Indian tradition (because I don’t see much of it now that I live in Maharashtra and Goa ), but people loved gifting boxes of dry fruits along with an equally large box of fire crackers. The fire crackers were sent back, since we didn’t burst them , green Diwali and all, the pistas were devoured even before the wrapping came of the other dry fruits. An Army Diwali  means not just one box of dry fruits, or two, but entire regiments and battalions of dry fruit boxes. And so at Diwali, my mother would get all the left over dry fruits chopped, and soak them in Rum and Brandy bought from the Army Canteen. So you see, the two main ingredients of baking a Christmas cake; rum and dry fruits were present in abundance in almost every Armed Forces home. Also the entire chopping of what seemed kilos of dry fruits needed an army of workers, again something which was a privilege we enjoyed in the defence colonies. It’s easy to see, why I thought Christmas cakes was something of an Army/Navy /Airforce tradition rather than belonging to a religious celebration.
In the Armed forces, people of different region and religion , all seem to be mixed and moved around the country like a bag of pot -pourri, and all that you have in the end is a fairly homogenous group of odds and ends. And so here we were, Bengali hindu Brahmins, baking the most fragrant and indulgent Christmas cake, a recipe my mum learnt from another Armed Forces wife.
Cut to now, and it’s been over 15 years since my father left the Army, and yet , year after year, Ma makes  5 , sometimes 6 batches of Christmas cake, the prep for which begins at Diwali, and the cakes begin baking by first week of December all the way to mid January, depending on who needs to be gifted the cakes.
Even after baking them, the cakes are carefully wrapped in silver foil to keep the aromas in, and lovingly watered with rum every few days. There is a Bengali word they use for it ‘cake Moje jabe’ , I guess it means the cake will mature, or marinate in its juices. And in the last 16 years that I have been out of home ( I left home at 18 to stay in the medical college hostel, and then various hostels across the country , Goa and Madurai) but I have always received my Christmas cake , wrapped in silver foil and a red ribbon.
This year too, one of my mother’s patients who live in the UK, but come visiting their home in Goa every year, decided to fly down to Pune ,  to show their daughter to my Ma, who is a paediatrician in Pune. And Ma handed over my Christmas cake to her, to deliver it to me in Goa. Didn’t I tell you, this cake has travelled to places. Its travelled to Kolkata, and Dhanbad, and places overseas like Dubai, Mauritius , Canada, wherever her friends and family are.
The Christmas cake recipe, however , I have never tried making myself. It’s like Santa; we never told our parents, we knew they were Santa, because that would just take the magic out of it. If I start making my own cake, Ma might stop sending me hers, and part of the magic of Christmas is the gift of Giving, I don’t want to take that gift away from her!  However , I do make Christmas cake pops from ma’s Christmas cake.
The cake, unlike the store bought Christmas cakes, is thrice as studded with dryfruits than an average cake. So as one goes to slice a piece, the knife invariably hits a candied orange, veers off track, then hits a walnut and then skids off another route, until you end up with a craggy piece of cake and lots of crumbly cake bits.
Now here is a short and simple recipe for Christmas cake pops.
Crumble Christmas cake, or gather all the crumbly bits together and make little balls of them, add a little condensed milk/honey to bind if needed.
Melt dark chcoclate, add a little butter for gloss, add cinnamon powder , nutmeg powder and ginger powder to the chocolate mix. And what I love to add is oil based orange essence, and a few candied oranges . the smells and flavours of Christmas cake should reflect in your chocolate coating. I melt my chocolate in the microwave, going 20 seconds bursts until melted, but you can do it over a double boiler.
Now drizzle the chocolate over the cake balls, or if you are feeling fairly dangerous, you can stick a lollypop stick in the cake pops and roll it in melted chocolate. But I warn you the christamas cake is more dense and heavy than an average cake pop, and you’ll only drop it in the melted chcoclate.
These cake pops would have been the revamped version of rum balls I presume. But funny thing, while we were allowed to have Christmas cake matured in rum , we weren’t allowed to have Rumballs as a kid!
Recipe also of candied Orange peel.
Peel oranges,sundry the peels for a few days. In a pan take ½ a cup water, bring to boil, add ½ cup sugar, add the diced dried orange peels. Simmer till sugar syrup evaporates. Keep in an airtight container. 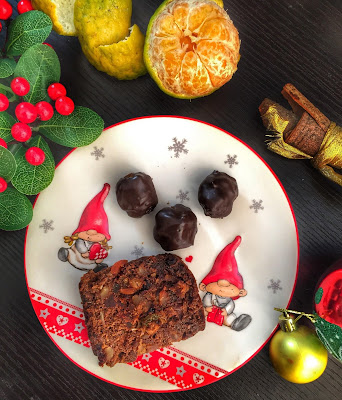